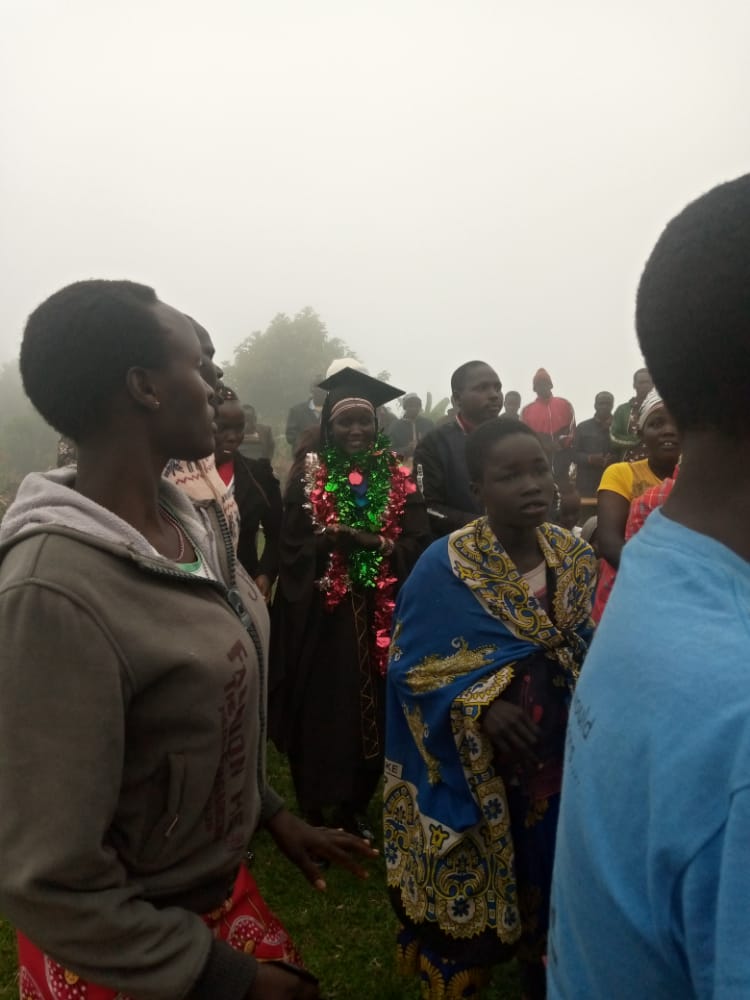 Catherine Korwanyanga during her graduation ceremony at Kenyatta University, Kenya in June 2021. 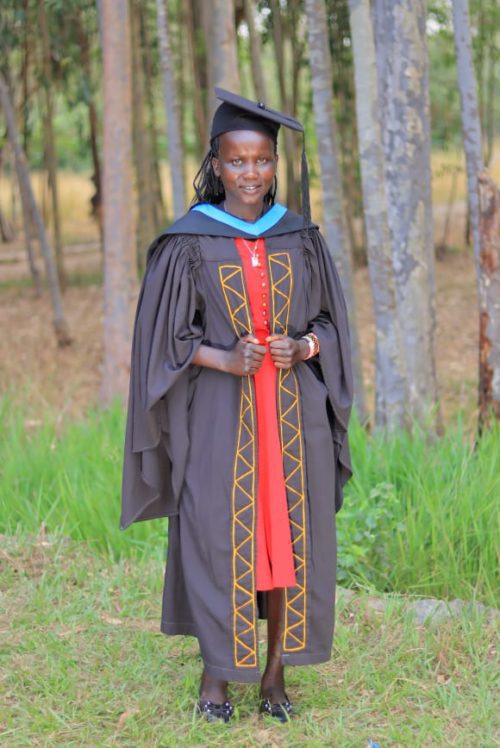 Interview Subject
Catherine Korwanyang is 26 years old and is an activist working with Kenya’s Ministry of Education to help end Female Genital Mutilation and ensure educational opportunities for young girls.

She was born in West Pokot County, Kenya where she escaped FGM and earned a college education. She was the first in her village to graduate from college.
Background
Female genital mutilation (FGM) involves altering or injuring the female external genitalia for non-medical reasons. The practice poses serious risks to the health and wellbeing of girls and women and is widely recognised as a human rights violation.

Nevertheless, it is estimated that at least 200 million girls and women alive today have undergone some form of FGM and a further 68 million are at risk of being cut by 2030.

In recognition that FGM is not only a harmful practice but also a violation of human rights, Kenya has adopted a robust legal framework. The country has ratified several international legal instruments that have become part of Kenyan law as provided for in Article 2 of the Constitution and the enactment of the Prohibition of Female Genital Mutilation Act, 2011.

Many elders in rural villages continue the practice anyway.

Child marriage, which is directly related to FGM, is also illegal in Kenya today but according to Equality Now, child marriage continues at a rate of 23 percent.

KAPENGURIA, Kenya — I grew up in a village in rural Kenya rustling cattle. The community did not value educating women and prioritized work over school.

The youngest of six children and one of two girls, I also faced the cultural setback of female genital mutilation.

Like most girls, my parents planned to have my genitals cut before joining high school in 2012.

In my community, female genital mutilation (FGM) is considered a cultural practice. The government declared it illegal and conducting FGM is now punishable by law. The elders do it anyway, in secret, and the practice appears to have no end in sight.

Villagers believe a woman is incomplete if she is not circumcised. Her chances of getting married within the religious traditions of the community become limited.

As a result, most girls get circumcised at a young age and immediately get married. I did not want this narrative for my life. I clung to the hope of finishing high school.

With a plan in mind, I convinced my parents I would undergo the cut immediately after high school in 2015. I finished what we call the form four national examinations [a series of tests in our final year], and then I ran away.

My sister took me into her home in Eldoret, 192 miles west of Nairobi City in Uasin Gishu County. She listened to me and accepted my decision to avoid circumcision. I no sooner finished my final examination and she arrived at school to pick me up.

She later told our parents not to worry; that I was safe with her. However, she cautioned them against forcing me to undergo the cut. They agreed, though unwillingly.

My parents said they were ashamed of me for running away from “the surgeon.”

Avoiding child marriage and FGM, I earned a college education

Two months later, the results of my high school examinations were released. I finished at the top of my class, qualifying me for college. This gave my parents a reason to smile and forget the shame they believed I brought upon them.

With the support of my sister and other benefactors, I enrolled at Kenyatta University in the education program. My dream of becoming a teacher unfolded before me.

I am the only member of my community so far who has been privileged to study at the university level. Setting history has not been easy. Earning my diploma was full of tears and at times, I wanted to give up.

I often lacked the basic necessities to keep me going; nor did I have the support of my parents like so many of my classmates. In those moments, I never imagined one day I would be celebrated by my community as the first villager to earn a degree from one of the best universities in Kenya.

In fact, I finished top of my class. I earned an honors degree in Education with a focus in physics and agriculture. This milestone was achieved through sheer dedication and discipline, and if I did it, any girl from my village can do it!

Prior to graduating from college, my parents never set foot in Kenya’s capital of Nairobi. This June, they left the village and the cattle behind, and they came to Nairobi for my graduation. It was an incredible milestone for my people.

Today, I am celebrated in my community. My success restored hope for the young girls there. I have become an activist speaking out against female genital mutilation, traversing West Pokot County to talk about this archaic culture that deprives thousands of girls of a good and full life.

It is time we say no to FGM. It is time to empower young girls to study and realize their dreams.

Working together with the Ministry of Education at the county level, we are taking action to end female genital mutilation and to ensure every female child has the opportunity to study and receive an education. 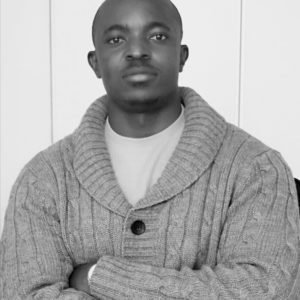 Wanjala Wandera is a journalist from Kenya who has worked with renowned local media. He writes for several publications internationally.