It never rains in September in Colombia, but that year, the rain poured down after we hung the fabrics. Water poured out of the sky. I could hear and smell the rain falling against the ground and on our beloved fabrics. My dear colleague Carmen Julia from Ecuador said, “Don’t worry, the rain represents the tears of disappeared people. Their memory is speaking to us.” 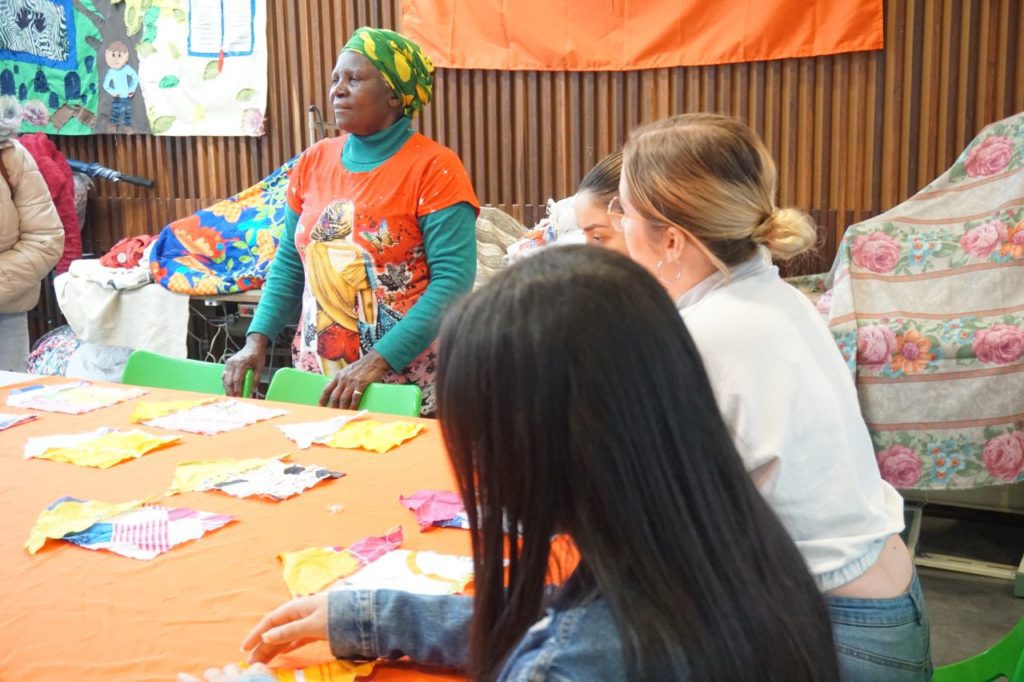 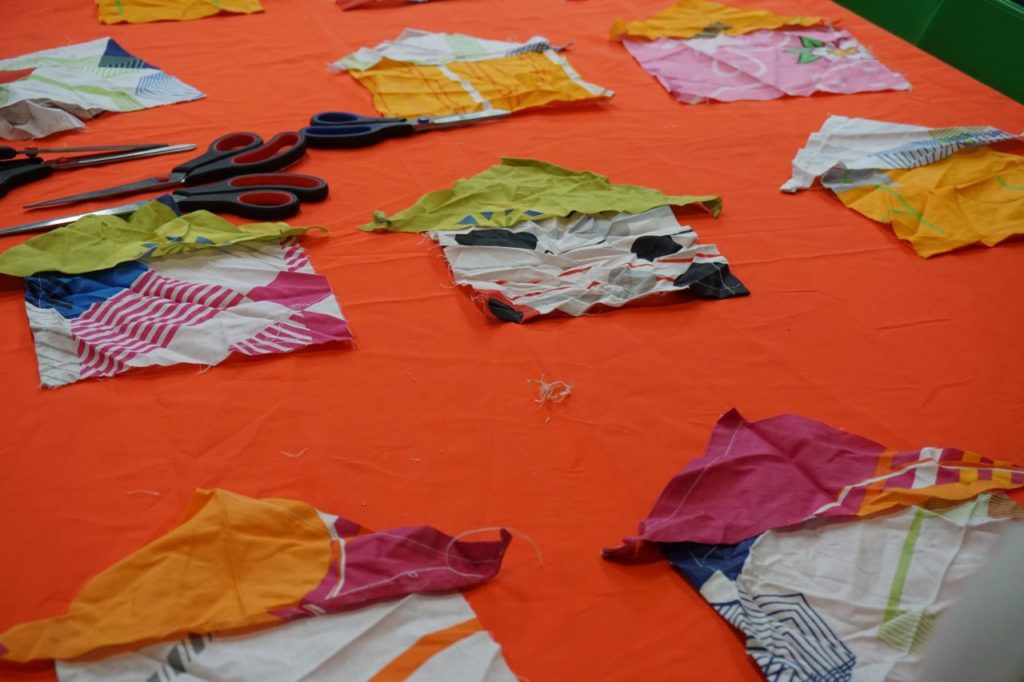 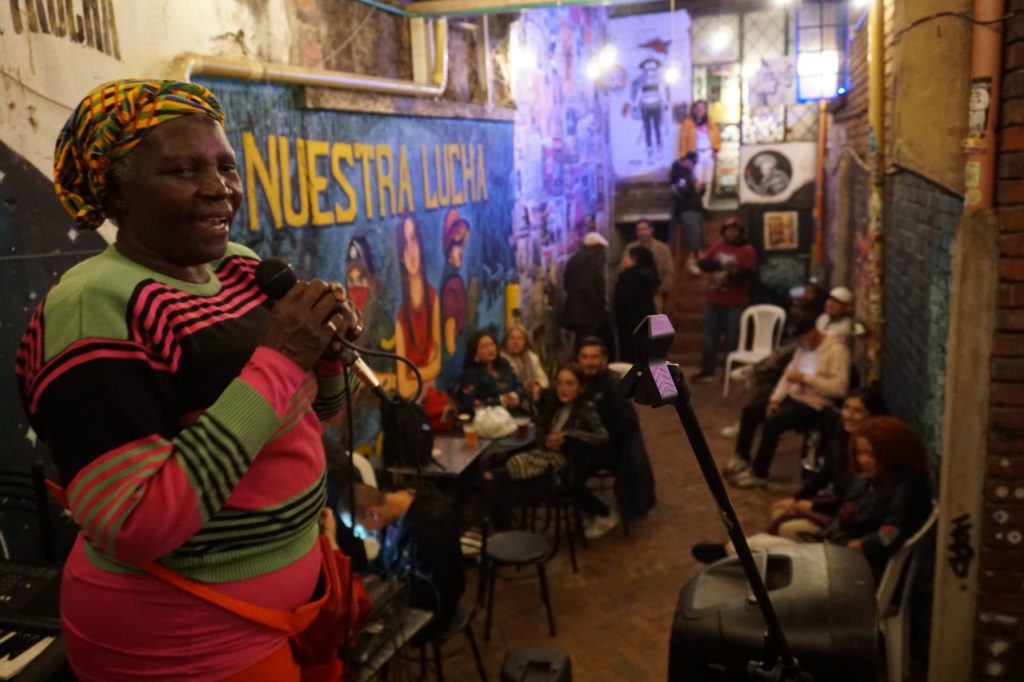 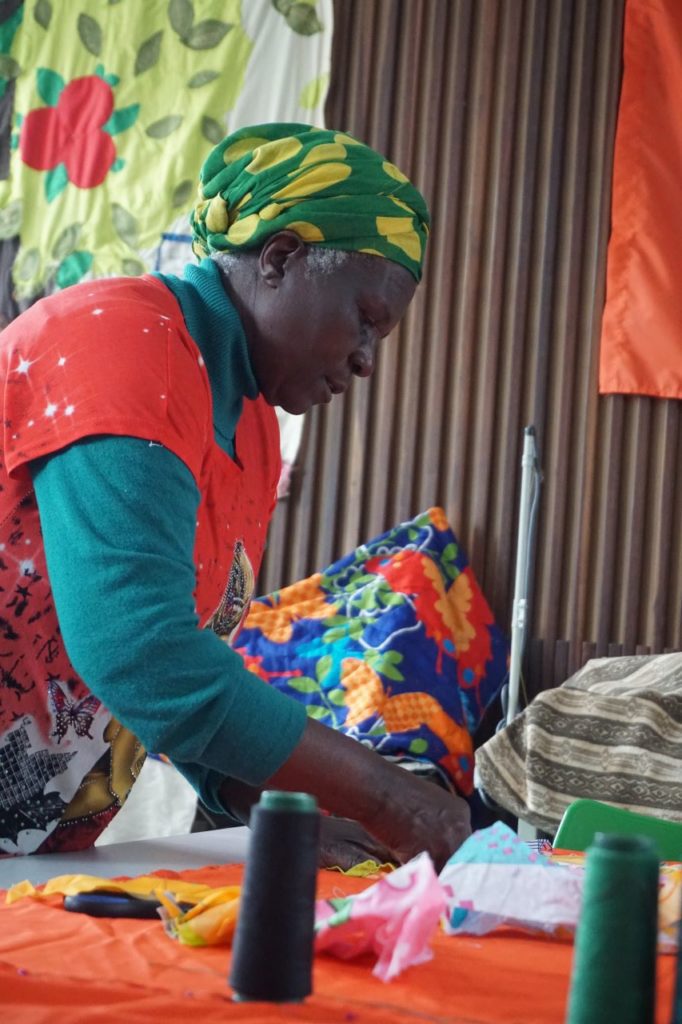 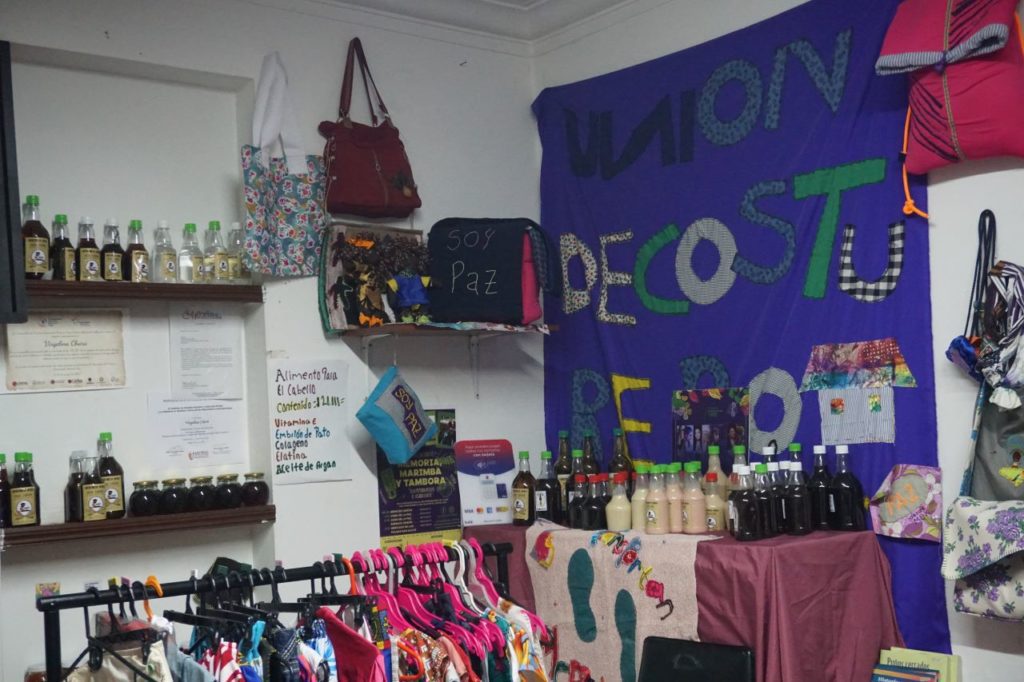 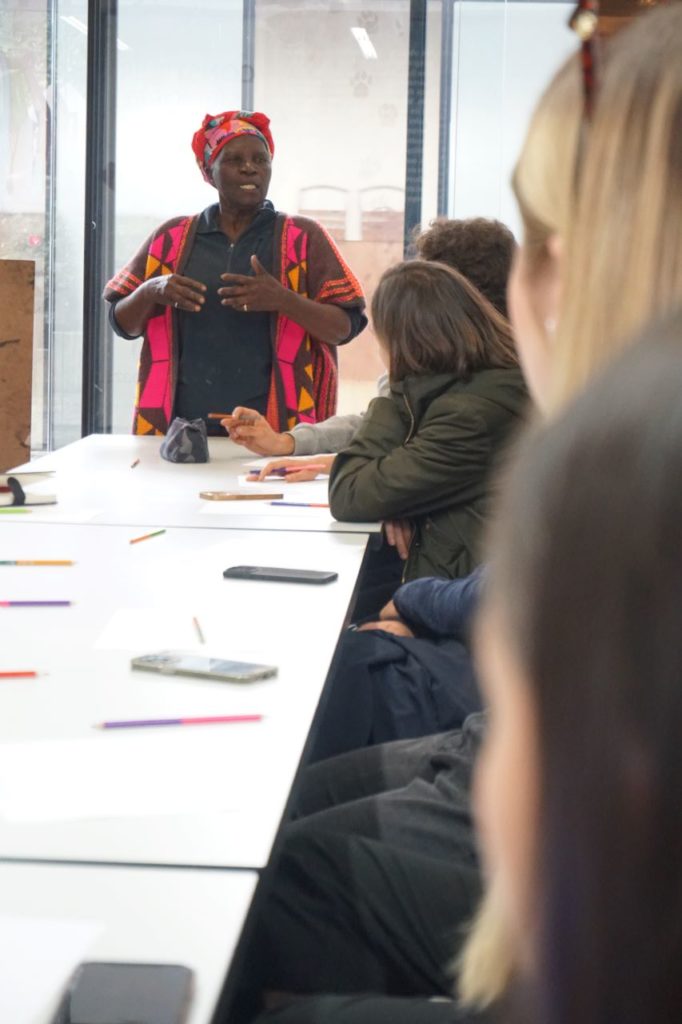 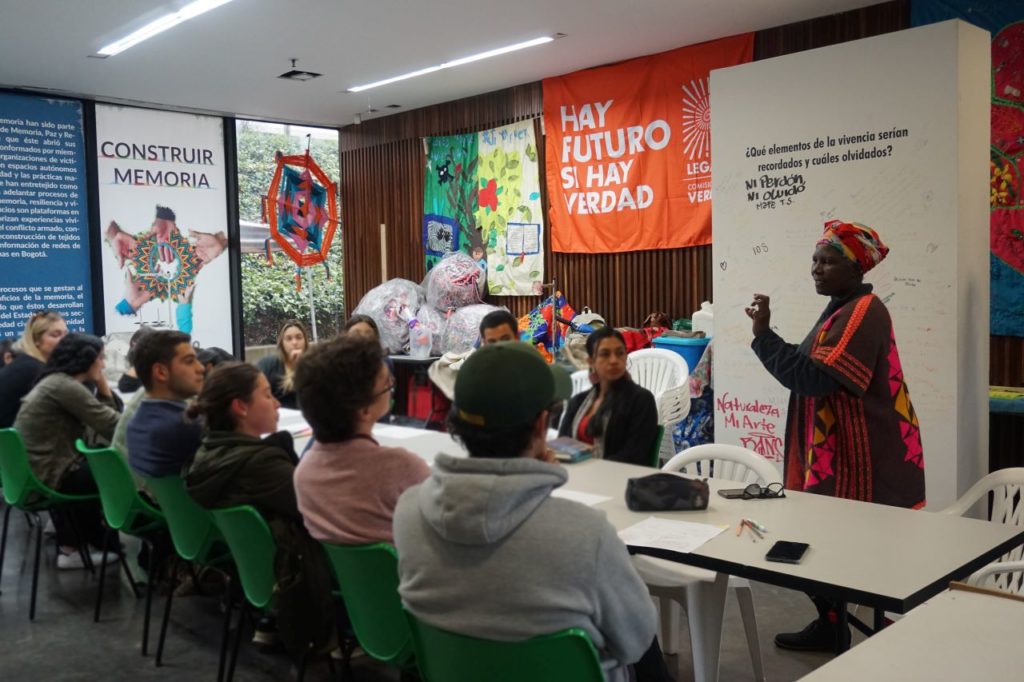 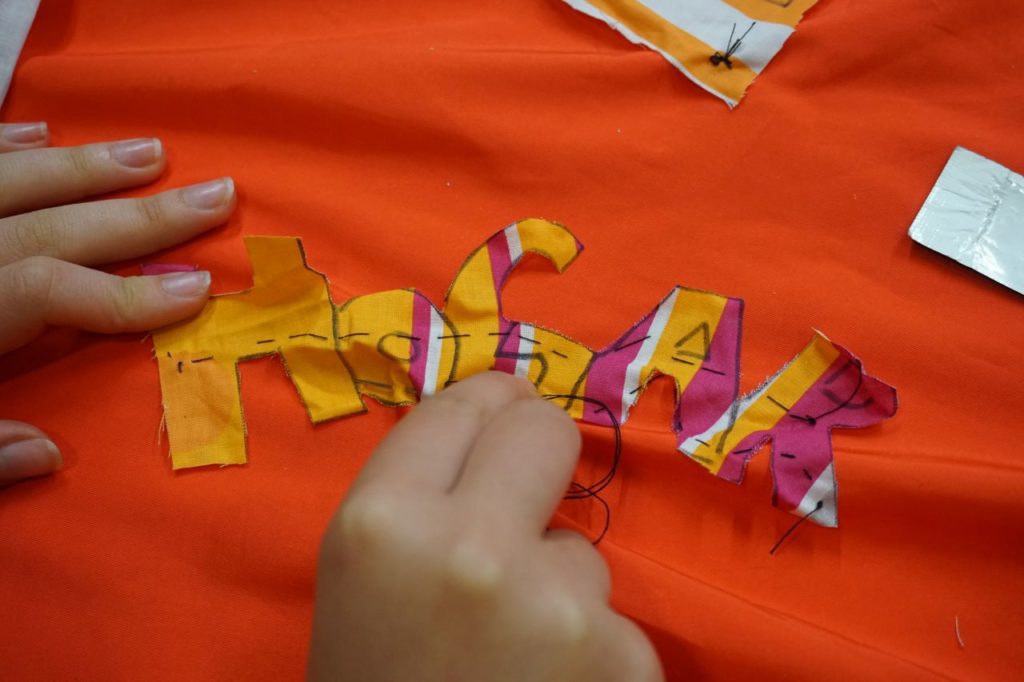 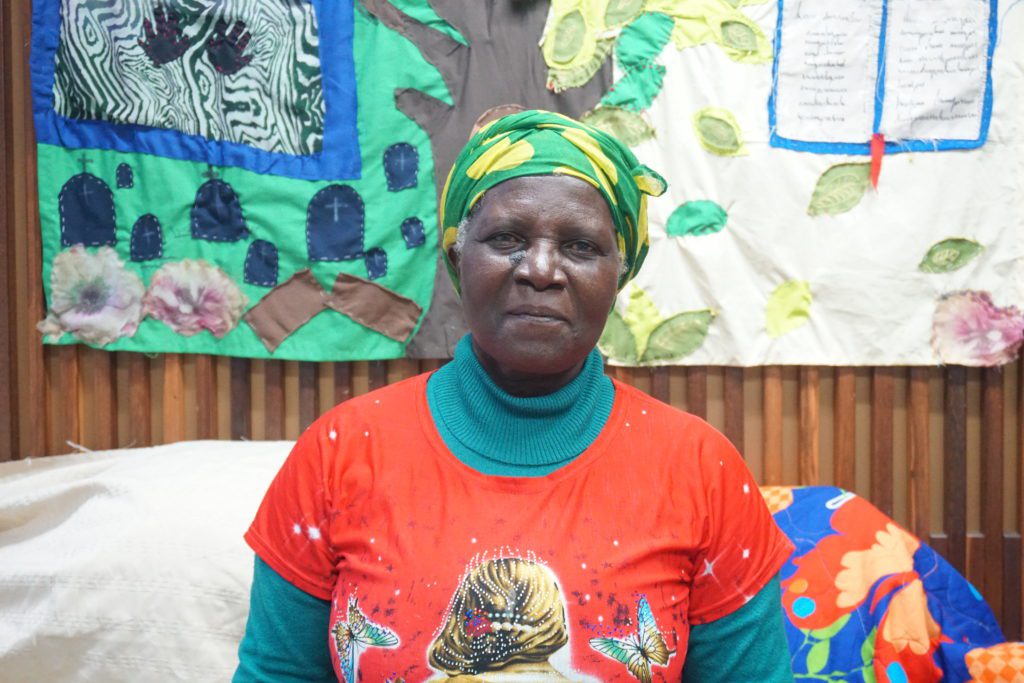 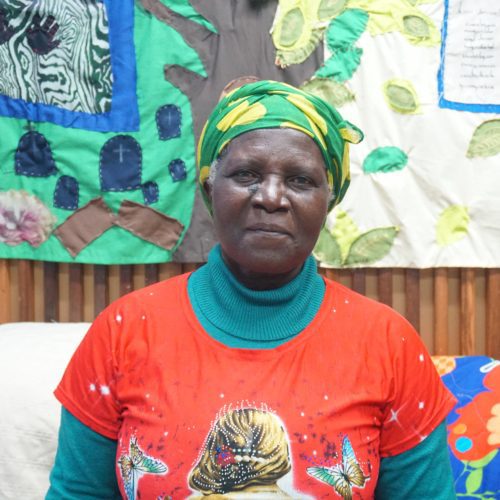 Interview Subject
Virgelina Chará is a human rights defender who lived through Colombia’s internal conflict as was displaced from her indigenous lands. In 1994, she created the Association for Integral Development or Fundación Asomujer y Trabajo. Her organization works with women and families who have been victims of the armed conflict, Afro-descendants, indigenous peasants, and those who were forced to work in prostitution.

As a song leader and weaver, she also leads a project called the Unión de Costureros. With thread and needle and ancestral fabric, she recreates memories, recognizes truth, and strengthens peace between different populations.

Virgelina was nominated for the Nobel Peace Prize in 2005.
Background Information
Colombia has an estimated population of 51,265,84 people. Forced displacement is on the rise in recent years, and its main victims are black, indigenous, and peasant communities.

People like Virgelina have been fighting oppression in Colombia for decades, and promoting peace. Her Nobel Peace Prize nomination marked an historical moment for the prize. In 2005, to bring more women into the process, 1,000 women from around the world were nominated in a collective. Today, they continue to collaborate through the the initiative: 1000 PeaceWomen – PeaceWomen Across the Globe.

BOGOTÁ, Colombia ꟷ After being displaced from my ancestral lands in Suárez Valle del Cauca, the M19 guerillas arrived in my community. Two decades later I joined a collective of women nominated for the Nobel Peace Prize.

In the 1980’s, La Salvajina megaproject brought a hydro-electric dam to the lands of my people. The very place we called home ended up underneath the dam and in some of its tunnels. My political, economic, social, and cultural vision of the world broke after being displaced from my family. While I never forget my roots, I feel challenged to reconstruct my history and community in a foreign territory.

In 1985, I escaped to Cali due to several threats. I was mistakenly linked to the M19. They introduced themselves as advisors. I had no clue they were guerrillas. They prepared and informed us on the types of paperwork we needed to file to pursue justice. From that moment, I began to lead social processes – to fight for our rights, create unions, and find useful information for my people.

As a displaced person, she fought for a home and to put food on the table

In those early years, I worked as a vendor in Colombia’s informal sector, selling goods in Cali Chontaduro. The authorities made it difficult for us to occupy public spaces in the city, but offered no other solution for us to bring food home to our displaced families. It seemed as though the District Secretary of Mobility had a strategy – taking my merchandise and leaving me barely stocked. I felt attacked.

After nearly a decade, and feeling tired, I began to organize, bringing together colleagues, women, and members of the Cultural Ethnic Foundation of black communities. We soon succeeded in obtaining identifications for 250 women and their husbands. Soon after we formed the Association for the Integral Development of Women, Youth, and Children – known as Asomujer y Trabajo.  We sprung into action, helping women, families, victims of conflict, and people in prostitution. We look at peace treaties, the military, and labor issues.

In time, I joined the House of Peace in Bogotá as part of the Union of Seamstresses. As I listened to the stories of victims, I sewed fabrics as a means to connect with them. As my hands touched the threads, I listened to every experience. Within the cloth, the story becomes part of what we stitch. It unites families, languages, and the country. We sew up the ruptures we have with each other.

Through fabric, they weave the stories of those who have disappeared

One day, at the Center for Memory, Peace, and Reconciliation in Colombia, we delivered a piece of symbolic art through our fabric. More than 1,500 people looked on from the local and international communities as we stood there in that emotional moment.

With the crowd surrounding us, we wrapped our fabric around the monolith [a large upright block of stone]. My heart felt so full as nostalgia overtook me. I thought of every person who participated in weaving that fabric and their stories. I also thought of those who are no longer with us.

We did not only honor our own struggle that day. There, near the Palace of Justice, we joined our story with the struggles of people from throughout Latin America and Europe. We incorporated the fight for environmental protection in Peru and refugees in Canada. It felt like all our stories came to life at once as we joined our histories.

It never rains in September in Colombia, but that year, the rain poured down after we hung the fabrics. Water poured out of the sky. I could hear and smell the rain falling against the ground and on our beloved fabrics. My dear colleague Carmen Julia from Ecuador said, “Don’t worry, the rain represents the tears of disappeared people. Their memory is speaking to us.” Her words moved me, and strengthened our commitment to honor those for whom we do this work.

A Nobel Peace Prize nomination for 1,000 women around the world

In 2005, my work culminated when officials summoned me to a ceremony for the Nobel Peace Prize. A woman in Switzerland proposed a collective nomination of 1,000 women from 150 countries, because men were so often the winners of the prize. Twelve of us from Colombia were among them.

While the collective did not win the prize, it spurred a movement. [The collective became known as PeaceWomen Across the Globe and continues to operate in unity today.] In time, people back home learned about my nomination. Walking through the streets of Bogotá one day, I encountered a teacher with a group of students.

A young girl came running up. “I saw you on television,” she gleamed. She said, “They gave you the Nobel Peace Prize!” I delighted in her smile and glow. “No, my love,” I answered, “They did not give me the prize. I was simply nominated.” She then asked for my autograph. “Why an autograph,” I asked her, “Come here. I’ll give you a hug and kiss on the cheek!”

With greater visibility after the Nobel Peace Prize nomination, I became a public figure, but remained the same person. I continue to fight. Peace in Colombia requires inclusive policies. How is that we still must petition for rights, 170 years after the abolition of slavery. Today, I demand guarantees of peace for all citizens.

As we guide processes for individual human beings to transform, we also understand peace to be a fundamental right many lack. Peace begins in each one of us. We must listen and speak the truth. There are those who will deceive us all our lives, telling us what is convenient for them. The restoration of rights begins only when the truth is spoken.

All photos courtesy of Adriana Niño.

Adriana is an independent social communicator focused on documentary journalism. She works on issues related to cultural and social vindication, exploring performative journalism, and graphic reporting. She uses different audiovisual expressions to make visible communities excluded and silenced. She resides in Colombia.

Adriana is an independent social communicator focused on documentary journalism. She works on issues related to cultural and social vindication, exploring performative journalism, and graphic reporting. She uses different audiovisual expressions to make visible communities excluded and silenced. She resides in Colombia.