The team of eight comprised of women from local clans is the first all-female rangers team in Kenya. 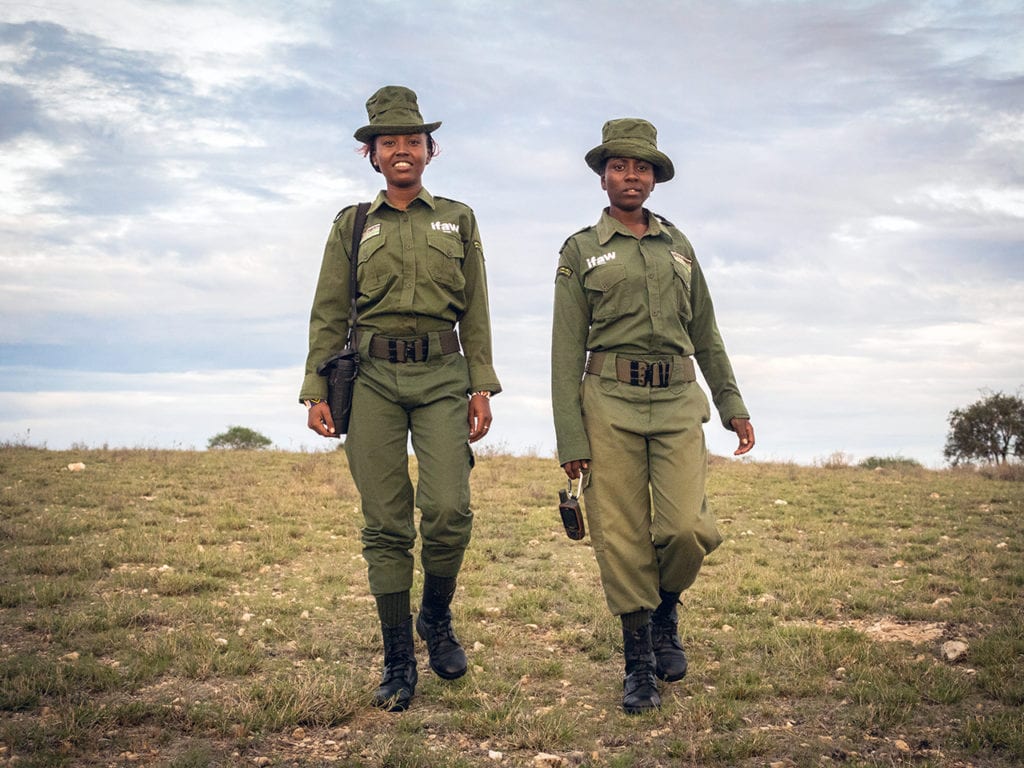 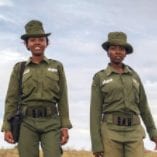 First-person sources
Sharon Nankinyi and Eunice Mantei make up part of the team of eight women from local clans is the first all-female rangers team in Kenya.

In our community, women grow up to be mothers.

Growing up near a wildlife conservancy, we were told careers in conservation were reserved for strong men. It wasn’t a task meant for females. But we were living a lie — a lie bred into our minds at birth.

But it was impossible to avoid falling in love with the beautiful wildlife with which our motherland has been blessed. Watching as the animals moved gracefully from one area to another and even the way they relaxed with their young ones become apart of our daily routine. It was soul-soothing — a feeling that only those who have experienced the natural beauty of wildlife parks can understand.

After completing high school education, which is something rare to achieve in our community, we knew what we wanted. And at the top of that list was to conserve our environment and protect our wildlife from poachers.

You can imagine our excitement when the opportunity to join a team of all-female rangers in a conservancy full of wild animals presented itself.

With luck on our side, we discovered an organization recruiting female rangers from all the clans in our local community. One female was selected from each of the eight clans to work as rangers, and we were fortunate enough to be among them. This was a dream come true for us and the beginning of a wonderful experience we will forever hold dearly.

It was a long journey to understanding wildlife conservation and protection, but, several months later, history was made. The first all-female rangers team started its patrol in one of Kenya’s largest conservancies.

We are a team of eight female rangers dubbed Team Lioness, which formed in 2019 by the International Fund for Animal Welfare under the Olgulului Community Wildlife Rangers on the border of Tanzania and Kenya.

This was the beginning for us — the beginning of our ability to protect our wildlife from myriad threats they face and put a stop to Kenya’s rampant human-wildlife conflict.

Most of our days are spent capturing armed poachers, running from aggressive buffalo, and, thankfully, relaxing around a campfire to ensure our wildlife is safe at this conservancy.

We are part of 76 community-based rangers guarding leopards, elephants, giraffes, and other wildlife in the 147,000-hectare (363,000-acre) area surrounding this park. We serve as the first line of defense against the poaching and retaliatory killing of the iconic wildlife who frequent these geographic corridors.

Our daily routine entails a lot of fieldwork to ensure enough supply in the grazing field for the wild animals and patrols to assess the health of the animals, limit the destruction of vegetation, and prevent poaching. We walk up to 30 miles per day scanning for threats to wildlife and have two rapid response vehicles on standby.

Dangers of the job

This job just has its lion’s share of challenges.

As rangers, one of the main barriers we witness is hostility from wild animals like buffalos and elephants that can easily charge at us. But animals are only one of the threats we face.

When livestock is attacked by wildlife, members of the community, who are often armed, become irate. It requires a sound relationship with the community to resolve discrepancies in a manner that protects all of us.

And then there are the poachers.

As unarmed rangers, when we encounter armed poachers or threats of big magnitude, we call for backup from the Kenya Wildlife Service [KWS] rangers stationed nearby.

Despite these challenges, our efforts have made a substantial impact on the national conservancy campaign confirmed the sharp decline in poaching cases.

Last year, the KWS released statistics illustrating the number of poached elephants dropped to 38 in 2019 from 384 in 2012, while the number of rhinos killed during this timeframe dropped to four from 30.

This gave me the motivation to step out and protect our wildlife.

We hear of underaged marriages in the Maasai community daily. Most girls in my community did not attend school. Instead, they stayed home and married young.

Not even our parents could believe that we would become rangers. Women are viewed as weak, capable only of managing a house, attending to chores, and caring for the family. Men, they could be rangers.

As the saying goes, “Anything a man can do, a woman can do better.” So, we stepped out to prove ourselves knowing that, one day, we will be an example for other young girls who dream of something more.

We fight for the rights of women in our community with everything we have. We are tired of underage marriages and female genital mutilations. Now, we are helping to remove the taboo surrounding women in the workforce and have earned the respect of our people.

Our work is a testament to the success of the all-female model that could be replicated to empower many other women in Kenya.

Women are often less involved than men in the global conservation and management of protected areas, but the narrative is changing. Women must continue to step out.

The ongoing Covid-19 pandemic has shut down Kenya’s tourism that provides income to the Maasai community near our park.

With no source of income, some community members have turned to poaching for bushmeat to support their families. Meanwhile, the pandemic has left rangers jobless due to the extreme economic impact forcing us to work overtime to ensure the safety of our conservancy.

This poses a new challenge for all of us who work on the vast ranch on foot and unarmed. We rely on armed government park rangers as a backup. Our hope is that a solution to the pandemic will be found soon because this does not only affect us humans but also our wildlife.

We need to put aside business as usual and embrace business unusual. There should be a drastic reduction and eventual eradication of charcoal burning and livestock encroachment in protected areas as these human-induced activities pose a serious threat to our wildlife.

Our suggestion is that the people visit the parks more and nurture a passion for wildlife conservation. Ultimately, community-driven conservation is the most effective and sustainable option.

If we all follow suit, the economic benefits accrued from our wildlife will ultimately multiply as we endeavor to attain the vision and the agendas of our government.

We will always fight for the environment, our wildlife, our community. We are Team Lioness.

Maasai women in Kenya are deeply connected to their communities and land, making them key proponents of local conservation efforts. They have insider knowledge and unique perspectives to offer male ranger units, but lack opportunities to get involved on a professional level.

The International Fund for Animal Welfare (IFAW) is one of the largest animal welfare and conservation charities in the world. The organization works to rescue individual animals, safeguard populations, preserve habitat, and advocate for greater protection. Brian Davies founded IFAW. IFAW was instrumental in ending the commercial seal hunt in Canada. In 1983 Europe banned all whitecoat harp seals products. This ban helped save over 1 million seals. IFAW operates in over 40 countries.

formerly Maasai Amboseli Game Reserve, is a national park in Kajiado South Constituency in Kajiado County, Kenya. The park is 39,206 hectares (392 km2; 151 sq mi) in size at the core of an 8,000 km2 (3,100 sq mi) ecosystem that spreads across the Kenya-Tanzania border. The local people are mainly Maasai, but people from other parts of the country have settled there attracted by the successful tourist-driven economy and intensive agriculture along with the system of swamps that makes this low-rainfall area, average 350 mm (14 in), one of the best wildlife-viewing experiences in the world with 400 species of birds including water birds like pelicans, kingfishers, crakes, hamerkop and 47 raptor species.