My first dog rescue occurred in 2018. I saw a dog lying on a hill in Ecatepec, starving to death. No one wanted to help him. Although the dog was not aggressive toward people, he ran away from us, terrified. When I picked him up, knowing this act would save his life, it filled me with pride. From that moment, I realized I have a special connection with dogs. 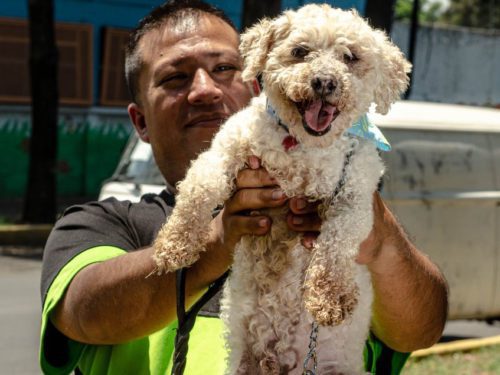 interview subject
Luis Roberto González López, 37, lives in Mexico City and five years ago he began to carry out his work as a rescuer and created a boarding house where he currently houses 20 dogs.

He gained a following on social media under the name Taxi Animalista. During the pandemic, he recorded videos with his dogs, offering his services as a taxi driver for animal transfers.

From what he earns from transfers, he allocates a percentage to help the dogs of his boarding house and to feed those who live on the streets.

According to his own accounts, throughout his life he has helped more than a thousand dogs by feeding them, rescuing them, transporting them, training them, and giving them up for adoption.
background information
In Mexico City, there are about 210,000 street dogs and cats, according to the Ministry of the Environment. According to the Animal Care Agency of Mexico City (AGATAN), about 30,000 dogs are euthanized annually, of which 52 percent are delivered by the families that owned those pets.

The Mexican Association of Veterinary Doctors Specialists in Small Species (AMMVEPE) estimates that there are around 28 million dogs in Mexico, of which 70% are on the street. These numbers place Mexico as the country with the largest number of stray dogs in all of Latin America.

In February 2022, the Law for the Protection of Animals of Mexico City came into force, which aims to “protect life and guarantee the welfare of animals.” This law stipulates animal abuse as a serious crime and establishes penalties of six months to two years in prison, as well as financial fines, for anyone found guilty of carrying out these actions.

MEXICO CITY, Mexico – I rescue dogs on the streets of Mexico City from my taxi. I have cared about dogs my entire life. My grandmother’s love for animals affected me greatly as a young boy. Today, helping unprotected animals fills my soul with joy.

Rescuing dogs, especially those near death, creates an incredible feeling. I help them find safe families. I also board dogs at my home. My volunteer work proves a special gift as I see how stray dogs in Mexico gain new, happy lives again.

Taxi driver develops bonds with rescue dogs, even aggressive ones

Animal rescue work goes beyond the material rewards of life. Deep down, I feel a sense of peace contributing to the world by saving dogs.

[Official estimates show Mexico has the highest number of stray dogs in all of Latin America, with more than 15 million countrywide.]

My first dog rescue occurred in 2018. I saw a dog lying on a hill in Ecatepec, starving to death. No one wanted to help him. Although the dog was not aggressive toward people, he ran away from us, terrified.

When I picked him up, knowing this act would save his life, it filled me with pride. From that moment, I realized I have a special connection with dogs.

Rescuing these animals from my taxi, I realized they can sense when a person is there to help them, and they gladly accept it. The moment you save a dog, a strong trust grows between you.

This remains true even for pit bulls and other breeds thought to be dangerous. While some appear aggressive and even attack people, they often change their hostile attitude when I approach. They become docile and affectionate because they know I am trying to help.

I find joy helping the most forgotten dogs: those with cancer or the very old ones. People tend to abandon dogs as they age, thinking nothing can be done for them anymore. These dogs have the same chance we do to live, and I honor them.

Rescue work allows me to ponder the value of a dog’s life. They radiate lots of love to everyone around them. Over the years, one rescue case shocked me the most. A car hit a dog causing such severe injuries, the dog’s intestines came out. Close to death, I sent him to the vet. With time, he fully recovered from the accident.

Another shocking case came when I found a dog tied to the train tracks. He had been run over. The train smashed his front legs, but we got him to the animal hospital in time and he survived.

I once witnessed a puppy being devoured by worms to the point where the skin across his neck began to die. With six months in treatment, the puppy survived.

The saddest moments in rescue work happen when dogs in critical condition prove too ill to be saved. We do everything possible to help, hoping to watch them recover and find a new family. Still, not all cases have happy endings.

Yet, some critical rescues surprise us! I once rescued a puppy with severe skin cancer and a significant tumor in his head. I had not worn protective gear that day and the dog bit my arm during the rescue. It took three months of treatment, but the puppy fully recovered from cancer.

In Mexico, some people distrust our work. They think we want to profit from the sufferings of animals. This could not be further from the truth. Getting financial support from society or individual people remains one of our most difficult challenges.

Society in Mexico does not support dog rescue

People in Mexico City can be hostile toward dog rescue. They claim dog rescuers make things worse; they say by feeding dogs on the streets we spread disease. I try not to judge them and to understand they have a social bias.

People often think human beings own the world, but in reality, we remain one of many species and should learn to respect all living things.

Dogs are extraordinary beings we should care for and protect. I urge dog owners in Mexico not to abandon their pets or take the easy, cruel way out.

My work as a dog rescuer includes many personal sacrifices. I invest most of my time caring for animals. In some ways, I have gave up my personal life to rescue dogs. I cannot go on vacation or for a walk because I have so many dogs to care for.

I understand they need me and thanks to this work, I realize dogs are my best friends. They never betray us, and they always make the best company.

My dogs fully trust me and remain loyal. I know not everyone believes it, but dogs always love us unconditionally, even when they suffer from abuse and abandonment at the hands of humans.

In another story brought to you by Orato World Media, a veterinarian fights to give Ecuadorian wildlife a second chance through the Sacha Project.