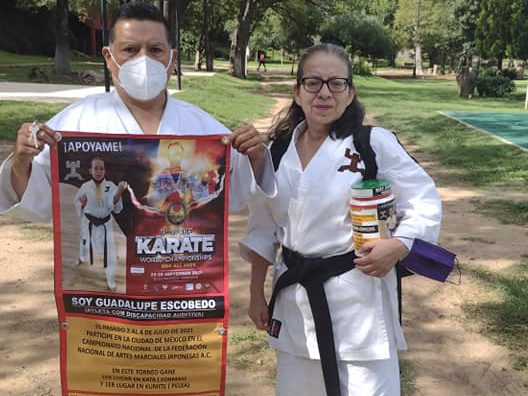 Since I cannot hear, I only saw that the judge came over and put the medal on me. I didn't know what place it was; I almost didn’t want to see it. When I finally realized it was the gold medal, it was incredible to me. I didn’t believe it—I was afraid that I was somehow not understanding. Finally, I was sure that I had won; at that instant, I was overwhelmed by an emotion that I still cannot explain. 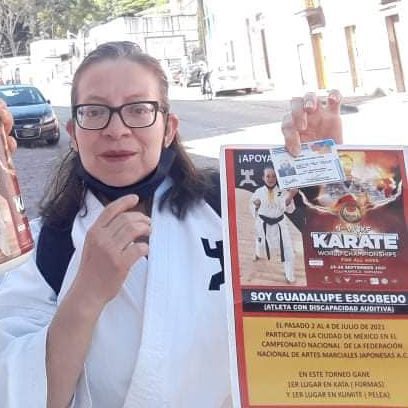 Interview Subject
Guadalupe Escobedo Gómez, 54, is a karate world champion in the adapted kata category. Her team believe she is the only karate fighter in the world with a hearing disability who has achieved this distinction.

Gómez teaches karate at the Deportivo Arnulfo Vázquez Nieto and work for the Secretary of Finance and Investment of the state of Guanajuato, the city where she lives. Her dream is to get a degree in special education to help more people with disabilities.
Background Information
The 9th World Karate Championship organized by the World Union of Karate-Do Federations (WUFK) was held from Sept. 23-26, 2021, in the city of Cluj-Napoca, Romania.

According to the National Institute of Statistics and Geography (INEGI), roughly 2.4 million deaf people live in Mexico.

In total, there are 20.8 million people with disabilities or with some limitation to carrying out activities of daily living (walking, seeing, hearing, self-care, speaking or communicating, remembering, or concentrating).

Of these, 5.1 million have hearing impairments and 2.2 million are limited in their ability to speak or communicate with others, according to figures from the INEGI 2020 Population and Housing Census.

GUANAJUATO, Mexico—I lost my hearing when I was just a year old. I don’t know what listening is; I only perceive the vibrations generated by the sounds. Despite this, nothing has limited my desire to learn and fulfill my dreams.

I am currently the karate world champion in the adapted kata category. No other person in the world has achieved what I have with the same disability.

The accident that changed my life

I was born on a small ranch in the town of Colombia, near the municipality of Acapetahua, in the state of Chiapas in southern Mexico.

I don’t remember anything about the accident that caused my hearing loss; after all, I was only 18 months old. But my older sister, Rubí, who was 13 at the time, told me that I fell headfirst into a pit about 50 centimeters (about 20 inches) deep, which caused my eardrums to rupture.

She picked me up from my feet, and my face was completely purple. I was about to die. She told me that she grabbed an onion and placed it in my face so I could smell it. Then she poured alcohol on me to help me regain consciousness.

I owe my life to my sister. I love her and am so grateful. I can’t imagine what she suffered when she saw me like that; for that reason, I consider her as my mother.

Despite my situation, I remember my childhood as a very happy one. I led a very calm and carefree life.

Thanks to my brothers, I learned to read and write. They also taught me to pronounce the letters, articulate words, and speak; something that I was not supposed to be able to do due to the lack of hearing. I don’t know how they did it.

Discovering my love for karate

Though karate had caught my attention from a young age, I didn’t start practicing it until I was 44. I had been taking my two daughters to train, and one day I asked the sensei if I could come in. He said yes, and that’s where it all started.

My only goal was to improve the balance issues caused by my hearing impairment. I was not interested in anything else. I never thought about a black belt or competing, especially since the first feeling I had when I started training was helplessness.

Karate in general and learning the techniques to correctly execute the katas (detailed patterns of movements) was so difficult for me. The beginning was so complicated. Any kick or movement, no matter how simple, caused me challenges with my balance. However, with a lot of effort and training, I made progress.

In 2019, I acquired my black belt. That moment felt very special because to get there I had to invest a lot of effort, both physical and financial.

I began competing, and in 2021 I became national champion in kata and combat. This gave me the ability to participate in the world championships that took place at the end of September in Cluj-Napoca, Romania.

Raising the money to fund my karate dreams

When my teacher told me that I was going to go to the World Cup, I couldn’t believe it. It was like a dream and also a reward for all the hand work I put in back at the beginning I was a white belt.

But the problem of money immediately came up: how was I to raise the funds to get to Romania? My teacher told me that we were going to design a plan.

We printed a banner with my photos and information about what I was doing. We also wrapped some buckets so people could easily deposit money, and then we went out to the streets of the city of Guanajuato to “bounce.”

For several weeks I went out every day from 10 in the morning until 8 at night asking people for money. My colleagues helped me; together, we collected about 1,500 or 2,000 pesos (between $75-100 USD) each day.

Most of the people supported me in the streets. Even the older adults gave me money, which filled my heart with tenderness. It is very nice to see people contribute with coins or even bills to help others.

Some did reject me, which hurt. Though it wasn’t pleasant, I had already prepared myself that this situation could happen, so I was ready for it. I just concentrated on my dream and continued to raise money.

I also did a raffle for a cell phone, and other people helped me with donations of money. That’s how I collected for my flight and my travel expenses.

I finally arrived in Romania to compete; it was my first time traveling abroad, and my first surprise was the length of the flight. I never thought it would be so many hours.

The first sensation upon arrival in Romania was that of freezing cold—I had not worn adequate clothing for those temperatures. We were there for almost a week, and it sticks out in my mind that that every single day was cloudy—we never saw the sun.

When it was my turn to compete, I concentrated too much. However, I surprised myself because the movements came out perfectly anyways. That gave me a lot of confidence.

During the award ceremony, I felt so nervous and apprehensive. Since I cannot hear, I only saw that the judge came over and put the medal on me. I didn’t know what place it was; I almost didn’t want to see it.

When I finally realized it was the gold medal, it was incredible to me. I didn’t believe it—I was afraid that I was somehow not understanding, that I was looking at the wrong medal color and that it was not actually signifying first place.

Finally, I was sure that I had won; at that instant, I was overwhelmed by an emotion that I still cannot explain. I started to cry. I hugged my teacher and missed my daughters fiercely.

I reflected on everything I did to get the money to go to Romania, and on all the struggles I faced when I started training. I looked at the medal again to convince myself one more time that it was the gold on, proof that I had not disappointed the people who had supported me and trusted me along my journey to this moment.

A life worth living

With everything that has happened to me, I feel proud of what I have lived and where I come from. My achievements remind me of all the decisions I have made throughout my life.

That is why I do not regret anything. Perhaps I have been wrong at times and right at others, but it has all been a time of learning.

I had to learn the importance of being happy and enjoying the beautiful things in life. I have no wealth, but I have my passions, my two daughters and a grandson on the way. Those are the most valuable things to me.