I wanted to spread the word about what we had found on our tandem bicycle. I wanted to share our newfound connection, my son's confidence, this inclusive sport that welcomed all, regardless of disability. Thus, Empujando Límites (Pushing Limits) was born. 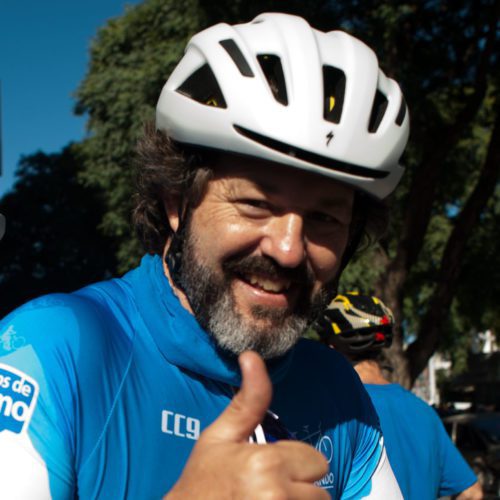 Interview Subject
Juan Zemborian, architect and father of two, founded the non-profit Empujando Límites after realizing the benefits of using a tandem bicycle with his son, who has autism and other disabilities.
Background Information
Empujando Límites: The organization’s goal is to “promote the use of tandem bicycles and provide communities with this tool to improve the quality of life of people with disabilities.”

Empujando Límites hopes that through tandem cycling, “many people can be brought closer to leading a better life by doing sports, enjoying nature and using it as a connecting element to achieve inclusion, starting with the family and continuing with the rest of society.”

Empujando Límites held a community bike ride that brought together people with autism, pervasive developmental disorders (PDD), and autism spectrum disorder (ASD), their families, and members of the community in general to raise awareness, comraderie, and support.


Autism: Learn more about autism and autism spectrum disorder at the following resources:
The Autism Society
Center for Disease Control and Prevention

BUENOS AIRES, Argentina—Becoming a father changes all your priorities. When my daughter Anita was born, I felt a happiness beyond anything I could have imagined; then Santiago arrived and ended up revolutionizing everything I thought I knew.

An autism diagnosis begins a new phase of life

We did not notice much of a difference between Santi and his sister at first, but when he was 10 months old, my psychologist sister alerted us that he was behaving differently than others his age. Diagnoses of developmental delay and hypothyroidism came next, followed by muscular hypotonia and finally, autism spectrum disorder (ASD).

Being told that my son had ASD marked a distinct before and after. It was no longer a matter of treating Santi’s various condition with medication and/or therapies; we had to transform our attitude as a family to generate positive changes in his life and how he experiences the world.

My first priority was to connect to Santi’s world. I first tried to do this through “floor time,” a therapy where I would lay on the floor and look into his eyes for hours at a time. Then, my thoughts moved to exercise, hoping to find ways to connect and strengthen his body.

Discovering cycling as a link and method of improvement

Almost by chance, we found what unites us to this day and helps us push limits.

We played tennis at first—in our unique way, but we played. However, I noticed that he liked pedaling a bike much more. It generated a tremendous joy in him. I realized that I could spend much more time with him doing that activity, and that stoked a desire to do it in the best possible way.

He first started with a tricycle, with me running after him. However, time passed, Santi grew, and eventually the wheels exploded from his weight.

We taught him to ride a bicycle alone, a challenging task. I didn’t know what to do or say to trigger his enthusiasm and desire to do it, until one day, when he was about 7 years old, I told him without really thinking, “Santi, you have to learn to ride a bicycle alone because when you turn 15 we are going to cross the Andes mountain range and reach the Pacific Ocean.”

I don’t know if he understood the magnitude of the challenge—in fact, I don’t even think I really understood—but it motivated us both.

The final piece to the puzzle: a tandem bicycle

At 12, Santi had largely mastered riding a bike. However, one small detail made riding and training difficult: he was not interested in using the brakes. He loved the feeling of the wind in his face and discovering the new places that awaited him ahead—his interests did not include braking and bringing all that to an end.

We adapted though, and I fashioned a sort of hand brake attached to the back of his bike that I could operate. Although I was never very sporty, I accompanied him on rides daily to be able to bring him to a stop if needed.

One day, I met a local tour guide at a gathering of parents at my daughter’s school. I told him about my idea of ​​crossing the Andes with Santi and expressed my doubts that we could ever make it happen. He replied that he had crossed the Andes with a blind person.

I felt astonished—understanding that such a trip was possible for others with disabilities opened up a whole new world of expectations for me. That’s how I learned of tandem or double bicycles, which allow two riders to cycle together on the same bike.

Excited about our new discovery, we hit another barrier; in Argentina, tandem bikes were difficult to find, as well as expensive and heavy.

However, the coastal area of ​​Miramar is known for unique bikes. We went there and rented a tandem whenever we could, pedaling that heavy and unfriendly bike up and down the coast.

I realized how good it was for him. Yes, it helped his muscular development, but much more importantly it finally connected with his inner world.

We fundraised and finally managed to buy a double bike, adapting it for our future journey. With much effort and training—logging 80 kilometers (50 miles) every weekend—we eventually met our goal and achieved our challenge.

While an amazing physical accomplishment, seeing my son gain confidence during our miles of pedaling meant much more to me. The experience taught me something crucial: fears do not go away, but we can learn to tolerate and challenge them.

I knew I couldn’t keep this discovery to myself—I wanted to spread the word about what we had found on our tandem bicycle. I wanted to share our newfound connection, my son’s confidence, this inclusive sport that welcomed all, regardless of disability. Thus, Empujando Límites (Pushing Limits Civil Association) was born, for the inclusion in cycling of people with disabilities and their families.

All photos by Jaime Andrés Olivos 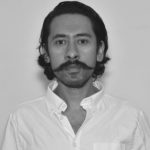 In Chile (his native country), he obtained a degree in Socio-Economic Sciences. He currently lives in Buenos Aires (Argentina), where he specializes in photojournalism. As a freelance, he publishes in different national media and collaborates for some international press agencies.