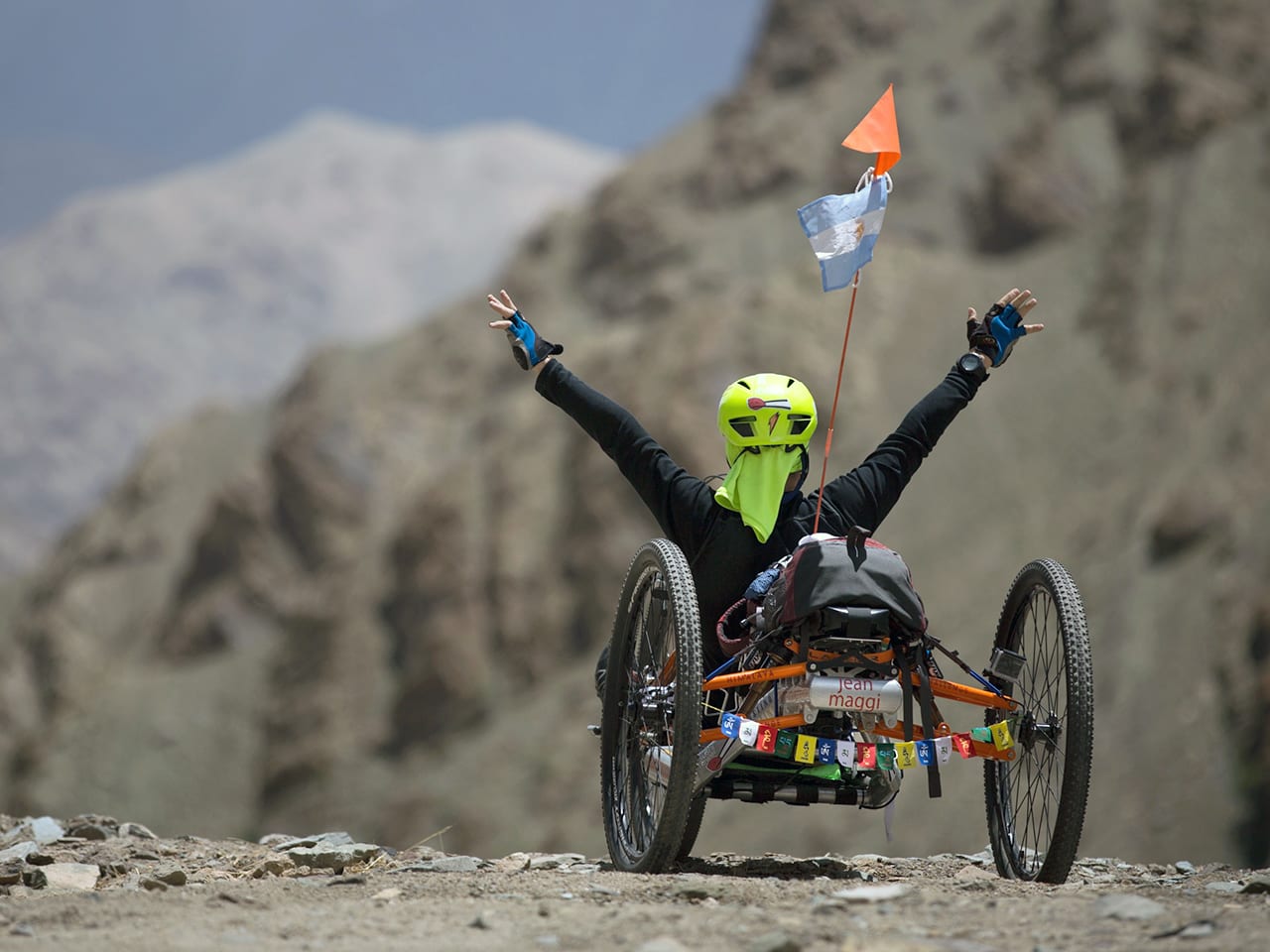 Disability is a big limit, but what sometimes seems to be a dream or a madness, are simple words: the difficult is done, the impossible is tried.

I started to imagine what I was going to do when I arrived. I wanted to wear the Argentine flag, get off my bike, and try to stand with my poles up. 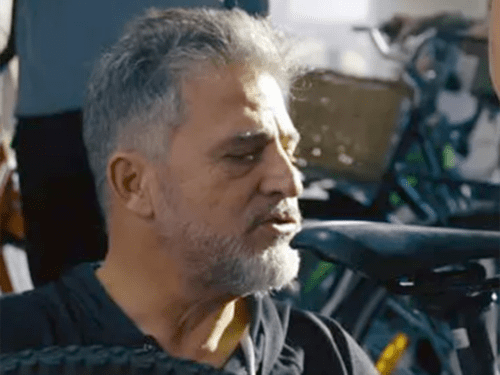 First-person source
Juan Maggi is a 57-year-old from the Province of Córdoba, Argentina, who, despite having polio, climbed the Himalayas.

KHARDUNG LA, Ladakh — Polio took away my ability to walk without crutches when I was just a year old. But it didn’t stop me from doing something that would have seemed impossible to me decades ago: climbing the Himalayas.

That’s exactly what I did in 2015, with the help of my adaptive bike. I am Juan Maggi, from the Province of Córdoba, Argentina. My friends call me Jean, and I call myself a dreamer.

And now I have even bigger plans: going much higher than the peak of the highest mountain.

My life is divided into two parts: The first one I classify as “non-acceptance” and the second started after a frightening medical event in my late 30s changed me forever and led me to break any self-imposed limits.

I contracted polio at the age of one when doctors gave me my first vaccine. About one in 2 million doses fail, and I got that one.

When I was a boy, I saw that society was not prepared to contemplate the needs of people with disabilities. It was as if the disabled had to live in a small circle, with only their immediate environment, their family, and very few friends.

People used to pass by and stroke my head. They called me a ‘poor thing’. Hearing so many times about my limitations made me believe in them.

I lived through fierce adolescence, where I preferred to take the world ahead of me with anger and violence. When I had autonomy and I left home, I began to self-destruct, assuming that my disability was a disease. I ate unhealthy things, smoked, drank and had unhealthy behaviors. This led to a heart attack at age 37.

I found myself in an ambulance, fighting for my life. That’s when I realized I actually had everything: my children, my wife, my family, my friends, my job – and I was about to lose it all.

After that trauma, I decided to make some changes in my life. Doctors recommended I participate in sports as part of my rehab. I ran into a friend who had seen hand bikes at a marathon in New York and suggested I buy one. I had no idea then that a year after buying my bike, I would be using it to run that same race.

My bike is my superhero cape

The first time I got on my bike, I felt indescribable freedom, autonomy, and happiness that I had not experienced to that point in my life. I was a happy man, unaware of everything that would happen next.

This is how I started training. I was very scared at the beginning. I needed a lot of passion, a lot of patience. I left behind the body that had imprisoned me for so many years.

I started to challenge myself: I crossed the finish line of the Central Park Marathon, completed the Iron Man in Miami, and skied in Canada at the Paralympic Games. Race by race, I was pushing my limits. I felt stronger than ever.

When I pedal, I feel like a superhero and the bike is my cape.

I began to dream of going to the roof of the planet.

The roof of the world

Willpower and self-improvement are my greatest incentives. Disability feels like just a circumstance that can be overcome. My life is living proof of that. Climbing the Himalayas was more than a challenge – it was a dream.

My preparation included many months of conscientious training, accompanied by a healthy diet and a lot of commitment, not only physical but mental.  After so much sacrifice, the moment came: In the summer of 2015 I packed my things and headed to the roof of the world. I started on July 16 and arrived on Aug. 3.

It was an incredible effort. It bent me several times as it was supremely challenging and intense. I had it rough physically and mentally. I was trained — I had prepared myself — but the mountain imposed its immensity and put me in my place.

At times, I didn’t want to continue. I wanted to get off and go home. The wind, the cold, the lack of oxygen, and the loneliness all hit hard. But when I thought about everything that has happened to me and how I overcome each obstacle, my head cleared, and I kept pedaling. I could never give up. Everything in my life indicated that I was not going to be an athlete. But there I was reaching the highest pass in the world with a hand bike.

When I saw the last corner, I knew I was about to reach my goal. I started to imagine what I was going to do when I arrived. I wanted to wear the Argentine flag, get off my bike, and try to stand with my poles up. I rounded the last turn and arrived at the roof of the world. I felt that the bicycle transformed me into a dream catcher.

My eyes clouded over with the vastness of the cold solitude on the roof of the world. Peace and self-love warmed my body. The world was below me; above there was nothing else.

For me, pushing my limits is about self-improvement. It is to see disability from another side. It is willpower, passion, freedom. It is the fight against discrimination from others and from my own.

I started the Jean Maggi Foundation with my wife and children after the climb. It occurred to us to take advantage of the minute of fame the Himalayas had given me.

Companies called asking me to share my story, and I came up with the idea of trading my talks for adaptive bicycles, then donating them.

Some time passed and the donated bicycles from the speaking engagements were not enough, so I thought about manufacturing more to reach those who needed them. That’s when we created Superadaptados, where we manufacture and assemble bikes and employ people with disabilities.

We have delivered more than 450 bikes. Every time I hand over one of these bikes, I feel happy. In each user, I visualize my own journey. It gives me great satisfaction to hear about those who had to exchange their bike for a bigger one.

My crusade is to put disability at another level. My ultimate dream is to erase the ties between inclusion and disability. I would like to replace the term with coexistence. If we talk about inclusion, it is because something is excluded. I think that what is really necessary is to change our concept and live together, to coexist.

I think that donating bikes build coexistence. We all have different and extraordinary abilities, dreams, and unique lives.

Looking to the future

I’m now working on an incredible new project I can’t yet fully divulge, but it is another great dream, a beautiful adventure from another world, that makes me explode with happiness. I am training a lot, pushing my body to the limit. This adventure will be like “touching the sky” with my hands. I am going to go much higher than the peak of the highest mountain.

Always using dreams as a destination, I know what I am: A serial dreamer.

According to the World Health Organization, Polio affects mainly people under five years of age.

One in every 200 infections produces irreversible paralysis (usually of the legs), and five to 10 per cent of these cases die from paralysis of the respiratory muscles.

More than 16 million cases of paralysis have been prevented as a result of global efforts to eradicate the disease.

If poliomyelitis is not eradicated in these last remaining strongholds, there could be up to 200,000 new cases per year in ten years worldwide.

In most countries, global efforts have expanded the capacity to deal with other infectious diseases through the creation of effective surveillance and immunization systems.