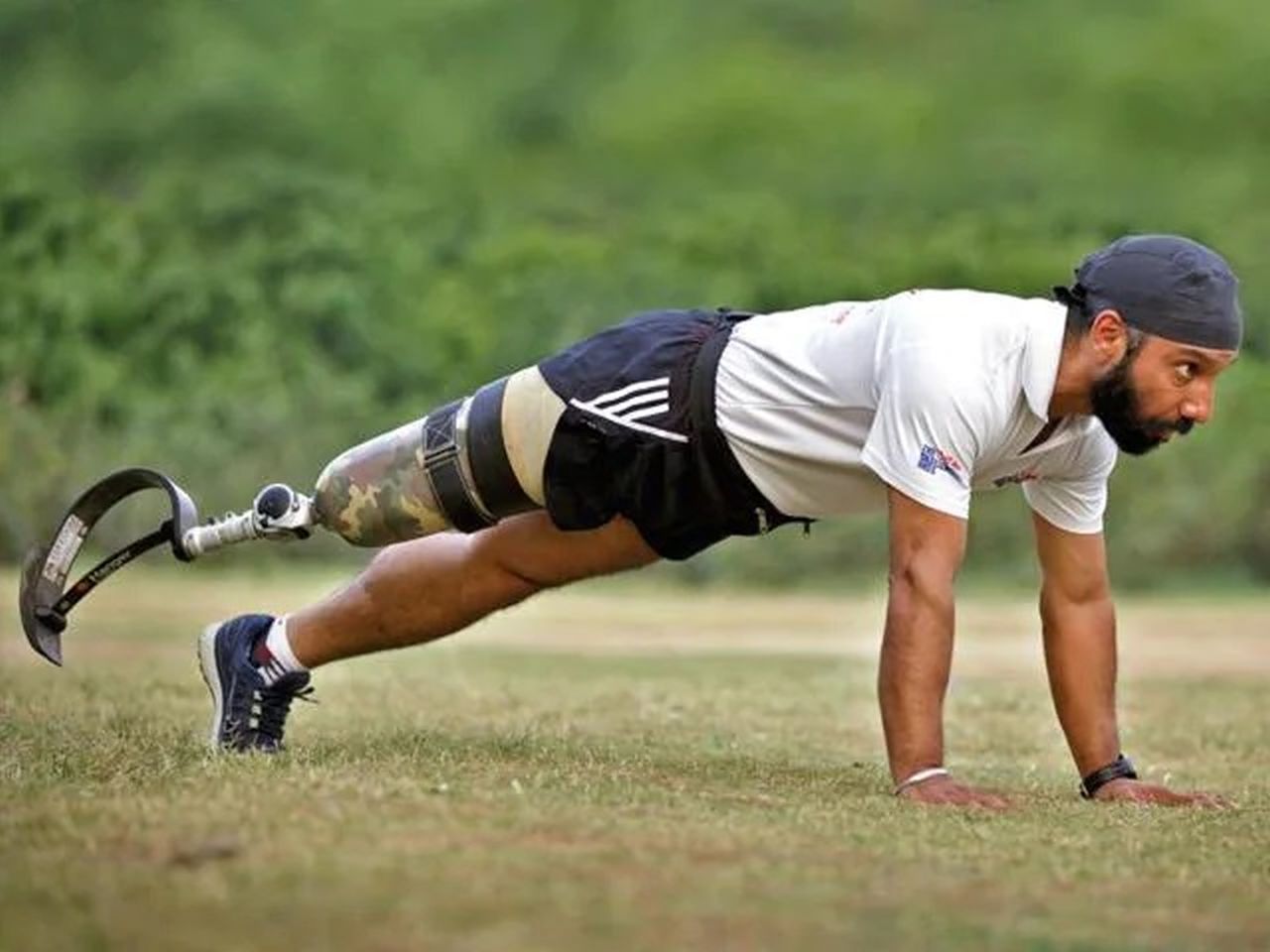 Since his amputation, Major DP Singh has completed 26 half marathons and one full marathon and skydived eight times | Photo courtesy of Major DP Singh

Grievously injured, I suffered heavy blood loss and cardiac arrest during transport. Doctors declared me dead on arrival, but I survived. 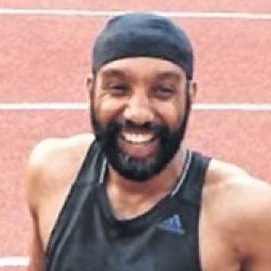 Interview Subject
Major Devendra P Singh is India’s first blade runner. On July 15, 2021, he celebrated 22 years of what he calls his “Rebirth Day.” On that day in 1999, he was nearly killed in a mortar blast at the Line of Control between India and Pakistan, during the Kargil War. He was pronounced dead but survived. In 2018, the Indian government granted him the national award for persons with disabilities under the role model category.

After recovering from a leg amputation and dozens of injuries, Singh learned about the Airtel Delhi Half Marathon, an annual 13-mile foot race. He trained significantly and in 2009, became the first Indian amputee to run a marathon on an artificial leg. Two years later, in 2011, he became the first Indian to complete a marathon on a blade prosthesis. In 2019, he carried the flame to Drass War Memorial during the 20th anniversary of the Kargil War. The same year, he wrote another chapter in history when he became the first solo skydiver among persons with disabilities in all of Asia.

Major Singh is a freelance motivational speaker and runs an organization called The Challenging One, in which he enables amputees from various walks of life to lead an active life. Despite being 100% disabled, he has pledged his body parts for donation.

The eldest of his siblings, Singh’s family was also affected by his injuries. He says that his father suffered mentally from his attack and the aftermath. Singh himself went through a divorce and ultimately quit the Army in 2007. He says that his religion, Sikhism, helped him to survive and thrive again. He explained that in Sikhism, great gurus and martyrs self-sacrifice, without shedding a tear, for their nation, their families, and to serve others. Singh says if he had not remained emotionally strong and overcame his loss, it would have demeaned his history and culture.

Most recently, Singh was diagnosed with Parkinson’s Disease.
Background Information
The Kargil War was an armed conflict fought between India and Pakistan from May to July 1999 along the Line of Control (LoC). The LoC is a military control line between the Indian and Pakistani controlled parts of Jammu and Kashmir. It does not constitute a legally recognized international boundary but serves as the de facto border.

Since Pakistan and India each had weapons of mass destruction, many in the international community were concerned that if the Kargil conflict intensified, it could lead to nuclear war. It is estimated that as many as 527 Indian soldiers died in the war, while more than 1,300 were injured.

The Indian Army declared the year 2018 the “Year of Disabled Soldiers in Line of Duty” to celebrate the undying spirit of soldiering.

After his service, Singh was entitled to a war injury pension. When a soldier, at that time, served in the Armed Forces, they did so for the entire country; but once you leave active duty, you are categorized by state. Singh was not officially assigned to any state. His father approached the Delhi government to release the benefits but was sent to Uttar Pradesh and then to Uttarakhand. No state would take responsibility. Singh finally received his benefits seven years later after a lengthy court battle.

NEW DELHI, India – I commanded a protective post on the Line of Control during the peak of war between India and Pakistan.

My 30 soldiers and I lived year-round in the second-coldest inhabited location on earth, in a rugged landscape 8,000 feet high.

Nestled in mountaintop posts in freezing conditions, we faced the Pakistan Army less than a football field away. When they launched their attack, thousands of shells, bombs, and rocket warheads wreaked havoc. Both sides suffered heavy casualties.

One day, a sense of foreboding consumed me. For 48 hours, not a single bullet had been fired. Something was brewing, and I knew tragedy would follow. I was right.

Soldier loses limb but not his will

On July 15, 1999, the Pakistan Army fired two mortar bombs. They targeted me personally as I stood outside a bunker.

The first bomb flew by, landing somewhere far away. Before I could react, the second bomb exploded right next to me. The killing area of a bomb is 8 meters in diameter. I was a meter and a half from where the bomb landed.

When the bomb exploded, I went numb and lost consciousness. Risking their own lives, my battalion mates rushed me to the hospital.

Grievously injured, I suffered heavy blood loss and cardiac arrest during transport. Doctors declared me dead on arrival, but they revived me, and I survived.

After all the surgeries and procedures, I was discharged but reeled under acute Post Traumatic Stress Disorder. I faced extensive physical disabilities.

Gangrene led to the amputation of my right leg. My left leg shattered, requiring knee surgery and the removal of large chunks of muscle from my calf and thigh. I lost parts of my intestines, suffered hearing loss, and was riddled with over 70 pieces of shrapnel, some of which cut straight through my body.

My metabolism and digestive system slowed down during my 40-day stay at the Military Command Hospital. My weight dropped from 143 pounds to just 61.

The emotional toll of being a disabled soldier

At the Military Command Hospital’s Artificial Limb Centre in Pune, injured troops surrounded me. Some had no legs; others had no eyes.

In the unit, we supported one another, maintaining our morale through a shared emotional high of having survived. I focused on learning to walk again.

However, outside of the hospital, reality hit hard and my physical limitations jolted me. Once a highly active and energetic man, I found basic chores and household tasks nearly impossible. I could not walk or drive, and I lost my independence. Where I once sprinted up a flight of stairs, now I dragged myself, a step at a time.

I hid my agony from my loved ones, cracking jokes and laughing, but I needed extra care. I was physically and emotionally drained. Inside, I wanted a hug or a shoulder to lean on. Irritability, agitation, and anger set in.

Despite my best efforts, I could not acclimate to the sympathetic glances. People pitied me. They said it was my Karma. I longed for someone to hold my hand, but people either called me a warrior or they looked down on my disabilities. When I sought support, people often backed out.

The soldier in me rose up, and I decided to take action.

In my new life, I have become a runner and a skydiver. The crippling roadblocks I faced as an amputee did not stop me; I was intent on improving my quality and standard of my life.

When I run, I feel the jarring impact of my feet on the ground from my hips to my head. I become bruised all over my body. Yet, I enjoy running. It tames the side effects of shrapnel injuries and focuses my attention on eating and sleeping well.

Skydiving, like running, helps me transcend my injuries. My first jump was indeed the most out-of-this-world experience of my life.

An Advance Landing Helicopter lifted me to an altitude of 9,000 feet. After leaping out, I free fell for 25 seconds. In the air, I felt like a bird. The Earth looked like a beautiful map, spread out underneath me.

When my parachute opened, I experienced the deepest silence of my life. You could hear a pin drop. The silence was spiritual.

Since my amputation, I have completed 26 half marathons, a full marathon, and skydived eight times.

People call me physically challenged. I call myself the challenger. I seek to change nothing; my life inspires people, and I feel I am serving a bigger purpose.