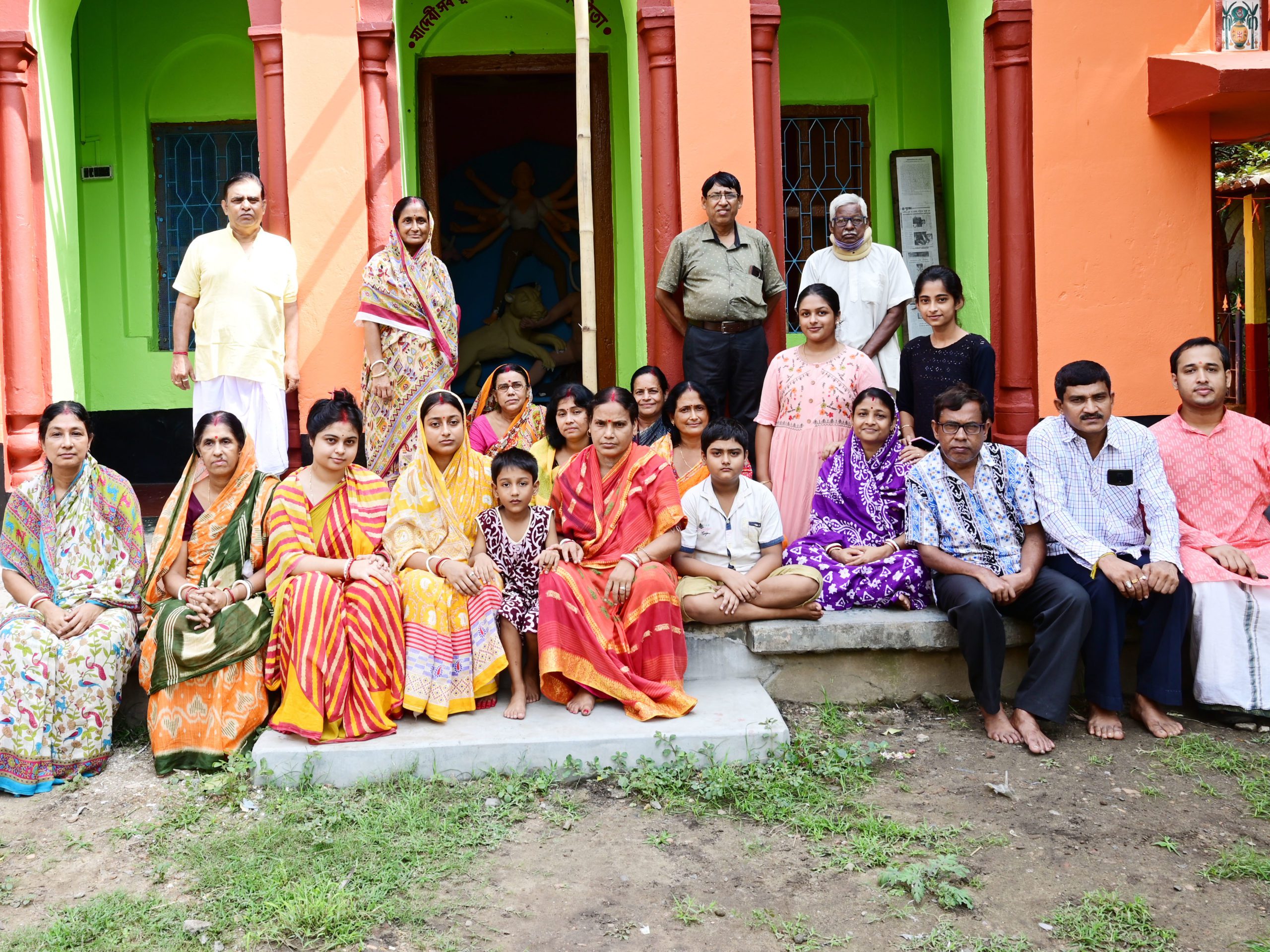 As the flames of the pyre climbed to their highest point, Gosainmani once again circled it three times. Afterwards, she jumped into the flames, giving up her life. The crowd began vigorously pounding the double headed drum. They shouted the name of God loudly to drown out her cries as she burned, but they say she never howled. 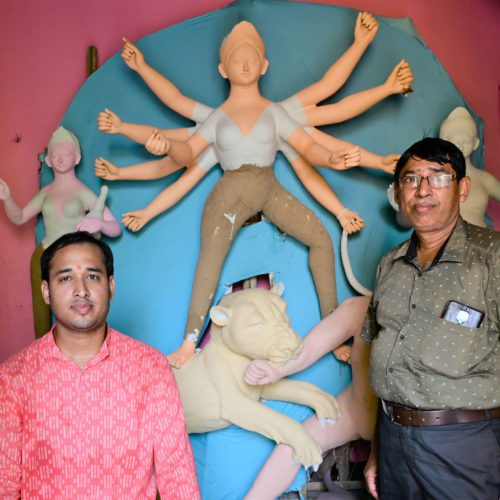 Interview Subject
Sailen Ghosal, 60, the story subject, is one of the senior members of the Ghosal family. He works in the Hatbasantapur Post Office as a Branch Post Master. On March 9, 2022, the North Hooghly Division of the Office of the Superintendent of Post Offices awarded him with a prize in honor of his outstanding accomplishment. Sailen admires Mahatma Gandhi writes on Gandhi in Bengali. He assists in planning Durga Puja’s logistical needs. Sailen lives with his wife and one of his two daughters (the other is married).

Also pictured is Arnab Ghosal, 31, a professor of Sanskrit. He teaches at Bhairab Ganguly College in Belgharia, North 24 Parganas District of West Bengal. He reads Vedic literature. He has been performing Durga Puja rituals as a priest at Ghosal Bari for the last 19 years. He studies the history of his family in his free time. His research of the 200-year-old Ghosal Bari temple’s architecture found that the temple had a canopy made of palm leaves and hay, under which the Durga Puja event was held. He wed his wife Mouli in 2021.
Background Information
Hatbasantapur is a little hamlet of the Arambagh subdivision in West Bengal’s Hooghly District, situated at 22.8665 degrees north and 87.8423 degrees east. The state capital of Kolkata is around 86 kilometres away. The River Dwarakeswar separates it from Bankura in the west, which has highland and rocky terrain, and Hooghly in the east, which is a flat alluvial plain region.

According to a 2011 census, there are 2,878 people there. While 94.77 percent of people live in rural regions, just 5.23 percent do so in urban areas. This agricultural region is widely used for the cultivation of rice, mustard, and other vegetables. Notable for its Durga Puja, the Ghosal Bari is a well-known landmark in Hatbasantapur. Hatbasantapur may be reached by railways or by bus.

KOLKATA, India – As a young child, I observed my grandfather and father doing the Durga Puja celebration in our house. According to heavenly directive, we perform our puja every year. We adorn the clay idol with a gold nose ring and a silver bracelet called “Agnikhaki Natnoya” which means “devoured by fire.”

This remains essential to completing the puja for my family. The jewelry represents that worn by our own ancestor Gosainmani when she transitioned into the Sati. [The ancient tradition of Sati in which a widow throws herself onto her husband’s funeral pyre has long been banned in India.]

In 2022 in India, the Durga Puja celebration at Ghosal Bari marks the 600th year of the festival. It remains a time when we recall our family’s history.

The practice of Sati remained prevalent in Bengal in 1422. During that period, our family [the Ghosal family] experienced a tragic occurrence. Our forefather Ramananda Gosain and his wife Gosainmani enjoyed a happy life. He served as a spiritual seeker, and she cared for their home. They lived as a childless couple.

When Ramananda died at the young age of 45 the entire family and the neighbors wept for his passing. Gosainmani, only 30 years old at the time, did not cry. She confined herself to her room while her family and the community readied Ramananda’s corpse for cremation.

According to Hindu tradition, a widow cannot wear anything other than white, and she must put vermillion in the part of her hair. When Gosainmani opened the door to the room, her family and the others gathered there, were startled to see how she looked.

With dry eyes, she exuded a sense of calm and serenity. She wore a stunning, thick, red-lined, white saree. She wore vermillion on her forehead and alta, a crimson dye, on her feet. With her accessories, she looked like a newlywed wife, including conch bangles, a silver bangle, and a gold nose ring.

She led the procession of mourners while holding an earthen pot filled with water from the Ganges River on her shoulder. In her hands she carried amrapallav, or mango tree leaves. She issued a warning to everyone in attendance: “Do not touch me.”

They transported the body to Bamanpukur for cremation, 300 meters away from their home. Wooden planks were arranged around the pyre. In this case, she had the right to burn her husband’s funeral pyre because they bore no children. Before lighting the fire, she made three laps around the pyre.

Forefather practiced tantra, wife comes back in a dream

As the flames of the pyre climbed to their highest point, Gosainmani once again circled it three times. Afterwards, she jumped into the flames, giving up her life. The minute she leapt into the flames, the crowd began vigorously pounding the dhak – a double headed drum. They shouted the name of God loudly to drown out her cries as she burned, but they say she never howled. Gosainmani attained sainthood.

The history of my family traces back one thousand years. We came from a place called Ariadaha, close to Kolkata. Our forefathers belonged to the Kalikula lineage – followers of Shakti. They came to Kolkata 650 years ago. One of the individuals in the group included Ramananda – a single man.

He searched for a wife in the form of Shakti [a divine, feminine force personified by the goddess Devi]. As a sadhak, Ramananda practiced tantra. Given preference for his alliance, he exchanged vows with Gosainmani and they enjoyed a happy marriage.

Two years after she burned herself on her husband’s funeral pyre, life seemed to return to normal for their relatives, until Ramananda’s younger brother Ramtanu saw the woman in his dream. Gosainmani said, “I married into the family, but you could not recognize me. I return to the family, seemingly as a deity.”

She continued, “You will discover a nose ring and bracelet if you search the ashes of our funeral pyre. Worship with total devotion.”

After that, she vanished.

Family discovers jewelry at the funeral pyre, the ceremony begins

The next morning, Ramtuna told his family and the locals about his dream. They went to Bamanpukur, the site of the couple’s immolation, to search for the nose ring and bracelet with tears in their eyes. At the location Gosainmani disclosed, they found the items. The Durga Puja started there, at the Ghosal Bari.

Since seventh grade, the priest Arnab has performed the puja ceremonies for our current generation. We follow the Kalika Puran procedure. We take an oath before the performance referred to as Sankalp. The rite starts with the chant of the mantra. What makes our ceremony special is the reciting of the names of our forefathers. We conduct a sacrificial rite using ginger, bananas, sugarcane, and ash gourds.

During the ceremony, the clay idol evolves into something beyond expression; it appears charismatic. We often complain about the proportions of the idol, but once the jewelry adorns her, all of our complaints become unfounded.

Thousands of nearby villages swarm to the area. They worship the two pots (Ganesh and Devi) and the family’s copper and eight-metaled Durga “Griha-Devi” (meaning goddess of the house). Since the Ghosal family does not include landowners, our puja is not flashy. We have a budget of 50,000 rupees which come from followers’ contributions.

The idol makers charge between 5,000 and 7,000 rupees, while the dhakis (the drummers) receive no compensation. Instead, a portion of the land is allocated to them for farming. Ten years ago, the potter Bharat Mistry agreed to make an idol for us for 1,000 rupees but then said the price was too cheap. We became angered. That same night, while in a trance, he received a divine message. The following morning, he arrived teary-eyed and announced he would create the deity for us.

My grandfather often told me of the extreme poverty our ancestors faced. They had no idea how to carry out the puja. With the little they had, they made a way, year after year. Sometimes they had no idea what they would eat, yet the puja went on as planned. Miracles happened which cannot be expressed in words.

I remember, as a child, our family debated holding the puja due to finances. We paid a visit to a wealthy man who practiced medicine in the neighborhood. He donated 50 rupees, and we could buy a kilo of naibiddo – the necessary ingredients for worshipping. Now, today, we experience opulence.

For that, we honor the goddess with holy food such as hotchpotch, rice pulao, fish, curry, fried potatoes, and fried eggplant. We make dry cabbage curry, payesh (rice pudding), chutney, and papad. On Ashtami, we welcome the entire community to join us for lunch. On Navami, however, only the family consumes the sacred dish.

Our six-foot-tall idol displayed on Ek Chala features a single backdrop featuring the goddess and her progeny. Our traditional potters created the clay god. The idol takes nearly a month to complete. We embellish the goddess with Sholar Saaj (made of shola pith). In addition to the silver bracelet and gold nose ring, we cover all ten of her arms with conch bangles.

Women play a special role in the festivities

The married ladies of the household execute the welcoming ceremony known as Devi Bodhon on Saptami. As Brahmin, we do not engage a priest. Instead, our family members conduct the Durga Puja ritual. We even play the Dhak, a huge drum. Every day includes exciting activities.

The Ghosal family includes 71 members, young and old. The wife of Arnab, Mouli Ghosal, remains the newest addition to our family. She joined us last year. When the work begins, all of the women of the family gather at durga dalan (the foyer), dressed in brand new attire. Each woman receives an assignment. To prepare the Bhog (holy food) they peel and slice veggies.

Every aspect of the puja rites gets organized by the women members. They chop fruit and string 108 lotus and bilva leaf garlands. Dressed in red-trimmed sarees, they carry the pot for Devi Bodhon (the deity’s prayer for the unveiling of her face).

For years, the practices remain the same. Everyone assembles in the courtyard wearing traditional saris, carrying plates of conch, betel leaf, areca nuts, sweets,, and vermillion. Before offering sweets to Devi, we rub vermillion with betel leaf on the idol’s feet and face. Any vermillion still on the palm is spread over each other’s foreheads, face, and three bangles.

My sister-in-law Sujata Ghosal feels grief and sorrow when Dashami marks the end of our pleasures, and the Goddess mother departs for her residence in heaven.

This year’s Durga Puja celebrations at Ghosal Bari mark the 600th year of the festival. The preparations for the festival are nearly complete at the residence of the extended Ghosal clan in Hatbasantapur, Arambagh, in West Bengal’s Hooghly District.

Because we have a family member who turned Sati, who worshiped in the image of Devi Durga, we maintain and exceptional and noteworthy puja. 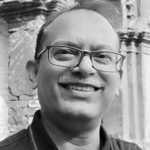