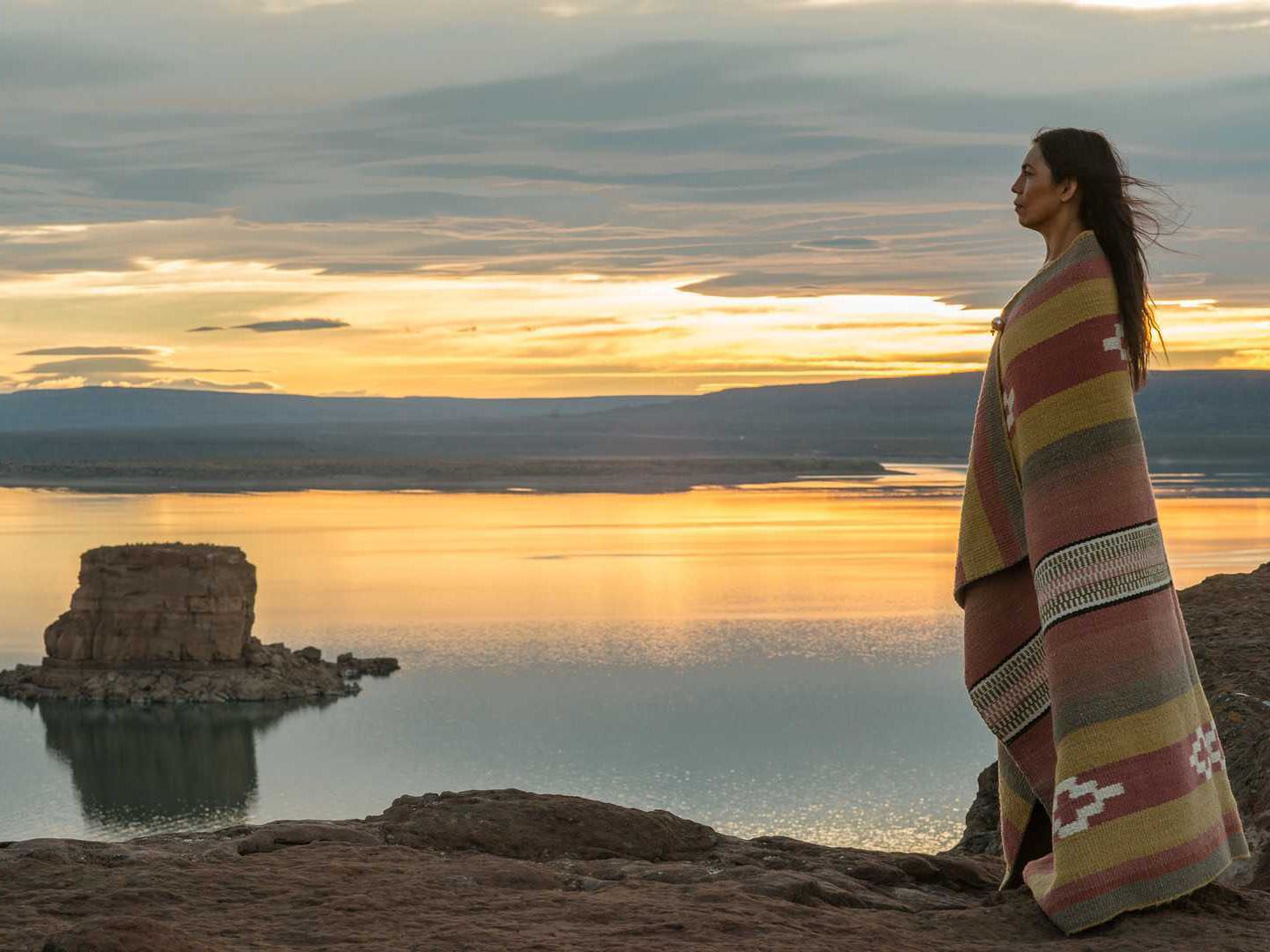 When I watched the leading actress personify Painé on stage for the first time, it felt exceptional. As she began to sing, goosebumps covered my skin, and a thrill ran through my body. Members of Painé’s family sat among the audience, crying. 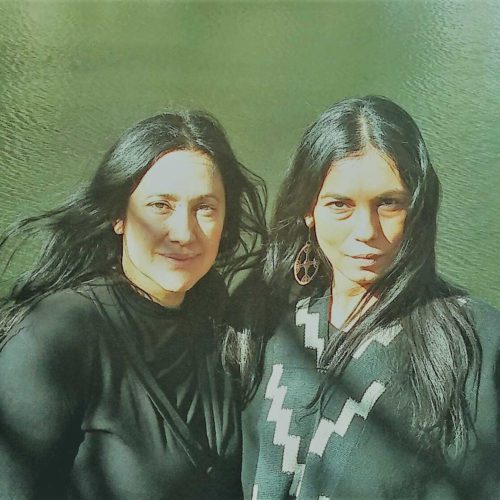 Interview Subject
Aymara Rovera is pictured above (left) with actress Charo Bogarín during film shooting. Rovera is an actress, film director, producer, acting teacher, and cultural manager. She lives in Neuquén after spending 23 years in Buenos Aires and Europe. She works in film, television, and theater. She directed of the film Soy Aimé.
Background Information
The film Soy Aimé is based on the life of Mapuche activist and singer Aimé Painé. The film addresses the story of Aimé Painé, who, proud of her origins, was an active militant of indigenous groups. She also became the vindicating voice in the 70s and 80s, since she was the first to sing and represent her language, Mapudungun, on stage.

The film is inspired by a true story with parts that are fictional and others that are bibliographical. Through this feature film, Rovera wants to transmit the legacy of “a cultural heroine.” At the same time, she seeks to make known the wisdom that Painé possessed. Aimé was a social activist who did a thorough job in all the communities of Argentina.

Aimé’s production, which was shot entirely in Neuquén, has a cast of figures led by Charo Bogarín, Juan Palomino, Rosario Valenzuela, and Loren Acuña.

NEUQUÉN, Argentina ꟷ In 2012, as I slowly turned the pages of the newspaper, I stumbled across an article about Mapuche activist Aimé Painé. I closely identified with Painé, who, like me, was born in the southern part of the country. I remember rushing home and reading everything I could about her on the internet.

Aimé Painé is one of the most outstanding women in Argentinian history. She dedicated her life to Mapuche indigenous culture. As a child, she became isolated from her native community, and spent a lifetime searching out her roots.

It was through her voice she found her calling. She met her biological family and began fighting to preserve the traditions and rights of the Mapuche people in Argentina. As I learned about Painé, I said to myself, “We have to make a movie about this.” I decided to bring Painé’s story to life.

In that moment, I began the journey of directing my first film Soy Aimé, shot entirely in Neuquén – the capitol city of Argentina.

The filmmaking process proved strenuous, with only a few days to shoot scenes. On the first day, I felt so excited. I had spent a great deal of time building, imagining, and admiring the character. I worked to get as close to Painé as I possibly could.

When I watched the leading actress personify her on stage for the first time, it felt exceptional. As she began to sing, goosebumps covered my skin, and a thrill ran through my body. Members of Painé’s family sat among the audience, crying. A strong breeze surrounded us, blowing away the roofing sheets. It seemed supernatural.

Painé, who spent a lifetime reconnecting with her indigenous roots, always said the wind was her ally. When the wind would blow during her shows, she would speak to it in a sweet, poetic way. “You feel so strong today, kürüf,” she would say, “What are you trying to tell me?” In the Mapudungun language of the Mapuche, kürüf means wind.

I wondered what she was saying to me in the wind’s voice as we began production that day. I felt such a strong connection to her. It seemed like years of research led me down a path straight to this moment.

Film brings meaning to many lives

The film begins with Painé – whose name as a young girl was Olga Elisa – being uprooted from her land in Patagonia in 1943. She was sent to grow up amongst a group of nuns who discriminated her because of her indigenous origins. She then went from orphanages to boarding schools. Years later, as an adult, she searched out her family.

Amid the Argentine military dictatorship, Painé became a singer and changed her name to Aimé. She was the first Mapuche woman who built a legacy through her voice.

One of the most remarkable moments while shooting the film took place during a scene about young Painé and her close childhood friend. The two developed a deep bond at the orphanage until they had to separate. The actresses conveyed such strong feelings, the scene exceeded my direction, flowing seamlessly. We could feel their bond through expression and motion.

On the last day of shooting, melancholy overtook us, knowing this was the beginning of the end of the production. The adventure had been a gift. We worked among the beautiful araucaria trees, the sun, the rushing river, pastures, sheep, and mountains. The film revealed the molding of woman from childhood to adulthood.

In the final scene, we recorded in Aluminé, a small town within Neuquén. In the scene, Painé encounters a Mupache woman in a sacred place. During the shot, snow and sun danced around us.. It felt as if nature guided every moment and action. As we listened to the two women speak, they showed us the path to take moving forward.

For me, directing this story has been an incredible honor.