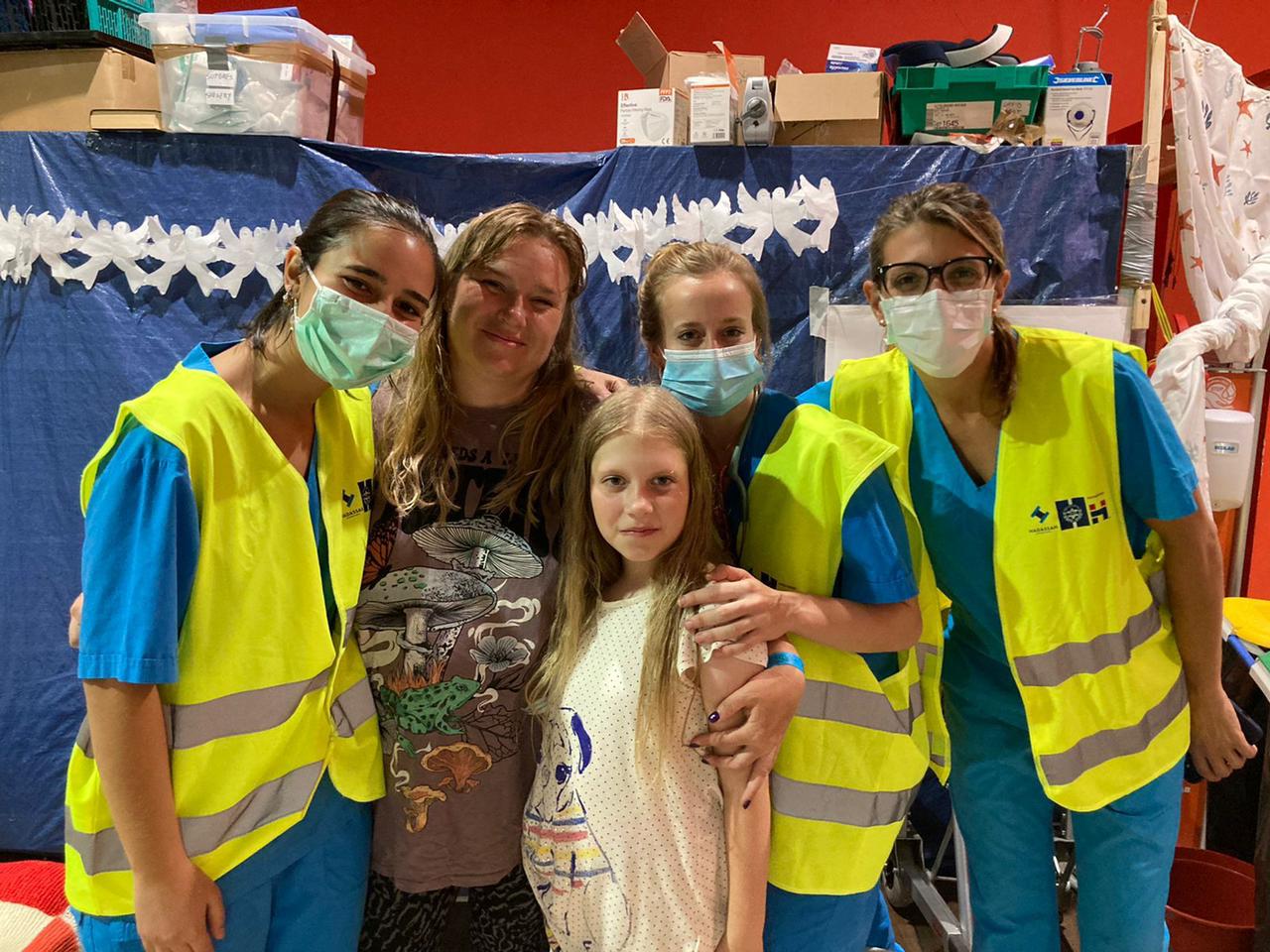 While treatment and containment formed a major part of my daily work, sometimes it would just involve talking to the person. Considering the distress they have been through, some people just need to talk, narrating to us what happened to them or what worries them. 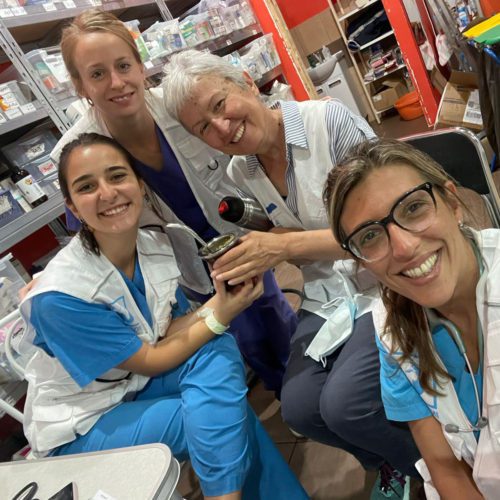 Interview Subject
Antonella Ríos, 33, front-right, is an intensivist at the Austral University Hospital. She, along with colleagues from the hospital, left for a three-week project at a refugee center in Przemyst, Poland near the Ukraine border.
Background Information
Agustina Zavattieri and Antonella Ríos, both 33, and doctors from the ICU at the Hospital Universitario Austral, as well as Clara Pérez Grassi, a 23-year-old nurse, left on June 14, 2022 on a KLM flight to Przemyst, Poland, nine kilometers from the border with Ukraine.

There they worked voluntarily for three weeks to assist refugees from the war. They were part of the humanitarian mission of the Hadassah Hospital in Jerusalem, which manages a primary care clinic and which, through its foundation, summoned the Austral University Hospital to participate by sending its professionals.

INTERSOS aid workers are in Ukraine, Poland, and Moldova to provide primary health care, protection, and psychological support to refugees from Ukraine, with special attention to the most vulnerable people, such as women and children. According to the United Nations, more than 5.5 million people are fleeing the country, bound for neighboring Poland, Hungary, Romania, Slovakia, and Moldova. According to OCHA, there are 7.1 million internally displaced persons and 15.7 million people in need of humanitarian aid.

BUENOS AIRES, Argentina—When Pablo Pratesi invited a group of us on a humanitarian mission to help Ukrainian refugees in Poland, we did not know how profoundly the trip would impact our lives.

Pablo served as head of the Intensive Care Unit at the Austral University Hospital. He reached out to me and two other colleagues inviting us to go on a three-week trip to assist a refugee center in Przemyst, Poland. Funded by the Adassa Adumori Foundation, out travels took us to city just nine kilometers from the Ukraine border.

A day at the center helping refugees from war-torn Ukraine

Prepared to help people suffering due to the Russia-Ukraine war, we set out from Ezeiza. The situation we encountered in seemed unimaginable.

We worked in a shopping mall converted to a field hospital. New refugees arrived daily. My colleagues and I served about 150 patients per day, and another 40 to 50 at night. Though the center remains almost fully occupied and difficult to manage, it feels calmer since our arrival.

We took on 12-hour rotating shifts, day and night. Typically, I awoke and went to the center to work or to serve as a guard, if needed. If I had a night shift, I rested during the day.

The repurposed mall included offices representing each country in the European Union. For instance, the office space next to ours represented Germany. The next one represented Italy. When a refugee arrived at the center, they registered at an office corresponding to a particular country.

After collecting their data, the refugee received a place to sleep and medical attention. Eventually, over the following days, the center provided transporting to the country they registered with.

Organizations like UNICEF and foundations dealing specifically with children caught up in the war remain on site. As part of the Hadassah Foundation, along with INTERSOS, we setup a clinic. My colleagues and I attended to people who fled their homes, those with chronic pathologies, and people not receiving treatment of any kind. Most of the refugees we encountered came seeking chronic medication or primary health care.

Stories of horror and heartwarming moments

While treatment and containment formed a major part of my daily work, sometimes I simply talked to the person. Having experienced extreme distress, some individuals just need to talk and to narrate what happened to them. They shared their worries. After all, these are people who lost everything. They left their homes with their belongings to enter a strange, new land hoping for safety.

Over my three weeks at the center, I witnessed heartbreak and heard stories about the horrors people went through. One family spoke about spending two full months in a cellar, locked up with Russian soldiers.

I encountered men from Latin American countries who worked contracts in Ukraine but somehow escaped the country. Many suffered bombing, arriving at the hospital with burns, pain in their ears, or other traumas. It did not take me long to understand they are survivors in the truest sense of the word.

Not everything felt dark and dismal. Though few and far in between, I enjoyed lighter moments at the center. One day, while attending to a mother and her small daughter, we learned it was the child’s birthday. We found a candle and organized a celebration for her, despite the chaos all around.

Amidst the terrifying stories and simple moments of joy, we experienced clear portraits of utter despair. I met a 32-year-old man. He did not speak Russian, Ukrainian, or English very well. We struggled to understand him. It took some time to deduce he had probably been on dialysis in Ukraine.

He had not received treatment in weeks. We wanted to send him to a hospital, but he refused to budge because he would soon be taken to Germany. My colleagues and I tried to explain the risk to his life. However, his desperation to leave overpowered him. He refused to leave the premises for life-saving treatment.

Working towards a better future

While language represents a barrier, interpreters support the center. Still, with so many dialects, difficulty arises. Refugees arrived full of fear, desperation to flee, and the serious impact of their individual cases. Often their lives remained at risk, even at the center.

The center serves as a response project of the European Union, paving the way for many donations. The effectiveness of the work brings people closer, then relocates them to other countries. I even encountered Russians who do not support the war. They came forward to help translating and other activities.

In times like these, every link in the chain remains significant. People donated so I could travel as a volunteer. As a result, I offered help. Each person can play a role to support refugees impacted by the horror of war. Lending a hand can change at least a tiny part of this unjust world.

In the future, I hope to set up a foundation in Argentina, connecting the public system with private ones. This can ensure no lack of resources in health services. It can create equal access to quality healthcare. While it may sound like a utopian idea, I believe I can make it happen.