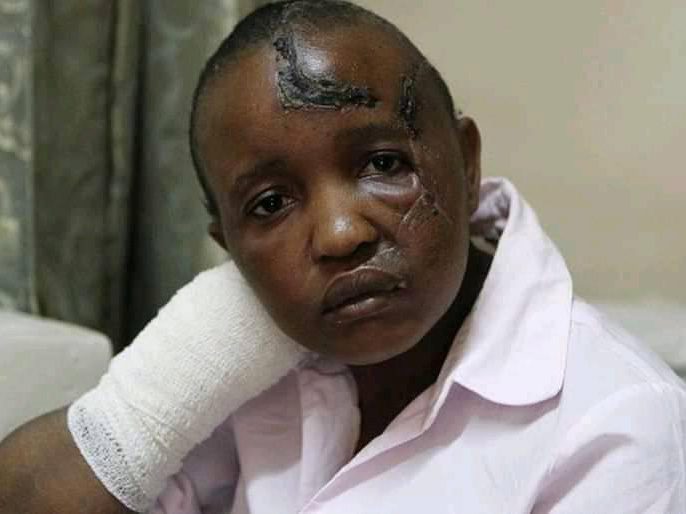 Nearly five years after the vicious attack, in February 2021, Jackline's former husband was sentenced to 30 years behind bars for attempted murder. | Photo courtesy of Jackline Mwende

My neighbors heard me screaming and called the police. They found me in a pool of blood with a severed hand on the floor. My other hand was almost detached and could not be saved. 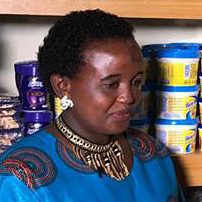 Interview Subject
Jackline Mwende, 30, survived a vicious attack by her estranged husband Stephen Ngila in 2016. It left her with both of her hands hacked off and severe cuts on her face and head.

In February of this year, he was sentenced to 30 years in prison for the attempted murder.

The attack sparked publicity and outrage amongst the public, government officials and women’s rights and gender-based violence activists.

In addition to building her a permanent resident, the Merck Foundation, through its More Than a Mother program, also started a business for Mwende so she can support herself.
Background Information
Gender-based violence: According to the Gender Violence Recovery Center at Nairobi Women’s Hospital, roughly 33% of Kenyan females has experienced an episode of sexual violence before attaining age 18, and between 39%-47% of Kenyan women experience gender-based violence in their lifetime– among the highest rates in the world.

The World Health Organization (WHO) estimates that 30% of women worldwide have experienced physical and/or sexual intimate partner violence.

MACHAKOS, Kenya—When I married Stephen Ngila in 2009, I never imagined that my new, hope-filled union would someday make me the face of domestic violence in Kenya.

The early years were peaceful

Just like many other newly wedded women, I anxiously waited to have a child of my own flesh and blood. Unfortunately, five years down the line, we had not realized that dream.

During our early years of marriage, my husband was a very good man. He was a church goer. We were living together happily as husband and wife in a three-room house in the town of Masii.

My husband, who then worked as a tailor, even started a small business for me, in which I used to sell small items like milk, sugar, salt, tea leaves, and maize flour. It was all in an effort to get a few extra shillings so that we could make sure we give our children a decent life when they came.

But after five years, my in-laws started piling on pressure and judgement; they blamed me for either deliberately refusing or being unable to give them grandchildren. My husband’s family would say their son married a fellow man who is only capable of eating and going to the toilet. They started pushing him to marry another woman who would be able to give him children.

The beginning of the end

In 2014, I felt enough is enough. We decided to seek medical advice at Nairobi Hospital on our inability to conceive, only to find out that my husband was the reason for our childlessness. He was impotent. But it was not all gloom and doom; the doctor advised him to attend the clinic so that they could start trying to solve the issue.

That was the genesis of our domestic wars. When I reminded him about attending the clinic, he would dismiss it and demand we change the subject. Other times he would promise to go but later change his mind. He never attended even once.

This issue was like a bomb that had been lodged into our marriage, ready to explode. The situation worsened, to the point where he went on drinking sprees just to forget the challenge that was hanging on his shoulder. My husband became irresponsible. All the money he earned, he channeled to drinking. He became brutal, and on some occasions, our arguments turned violent. Several times, I called our parents to try and bring peace to our marriage.

My parents advised me to pack all my belongings and leave him, but their advice landed on deaf ears. I was not willing to come back home to be a burden to them, especially considering the fact that I was the one supporting them. I sought intervention from my pastor, who lectured me to stand my ground and do my best to save my marriage.

I always wanted to safeguard my marriage at all costs, so I decided to stay with him. I always hoped things would become better, but each passing day the situation only worsened. He didn’t heed anyone’s advice.

A decision that changed everything

At this point, I wanted a child by any means; it was the only way I could salvage my marriage. My desperation and that overpowering yearning made me stray. But I did it purposely to save my marriage.

I reached an agreement with a long- time friend; he agreed to have a one-night stand with the goal of impregnating me. I met up with my friend, and we sought accommodations in Machakos town because I did not want to bring him into my matrimonial bed.

After spending the night with him, I returned to my home in Masii the following morning, July 23, 2016. I had been living alone there, as my husband had taken off three months earlier.

Less than an hour after my arrival, my husband stormed in carrying a machete. I remember him telling me, “today is your last day” before he started slashing me with the weapon. He chopped off both my hands, and left serious wounds on my face as well. The pain was unimaginable.

Luckily, my neighbors heard me screaming and called the police, who came too late. They found me in a pool of blood with a severed hand on the floor. My other hand was almost detached and could not be saved. They managed to rush me to PCEA Kikuyu Hospital.

After the attack, I learned that my husband had asked my neighbors to spy on me. They were the ones who told him of my trip to Machakos with the baby’s father on the day I conceived my then unborn child.

Recovering from a savage attack

The government gave me a monthly stipend for a year and free transport to the hospital. Activists, non-profit foundations and members of parliament also showed up for me; some helped me access prosthetic limbs, others provided transportation to therapy and still others built a house for me.

At first, pain and anger filled my heart seeing him roaming around freely, since the court had granted him a $2,000 bond. However, I am happy now that at least justice was served. I don’t think I can ever forgive him what he’s done; I now depend on others for literally everything.

I know many will say it was wrong to go outside my marital bed. I know people will judge me harshly for it, but I was desperate. The fact I am alive today and that I am a mother now is the silver lining in the middle of all the heartache and gloom. 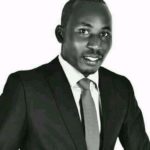