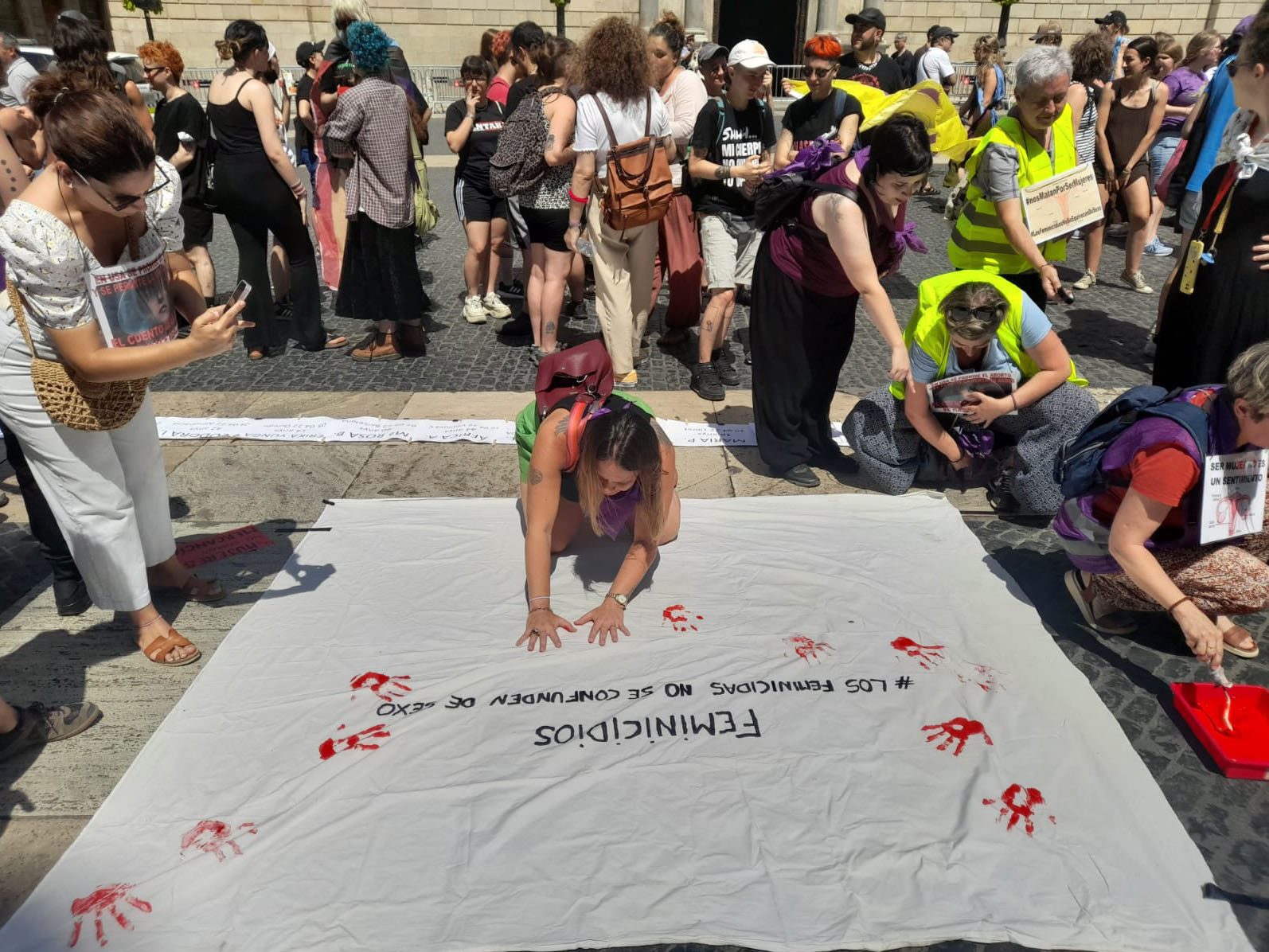 I arrived in place called Sheik - a nightclub in Tierra del Fuego. A dark place with dim lighting, many men entered the Sheik and drank alcohol. The women sat very neatly, and the owner brought me beers. After a while, I could barely move and felt immense pain. 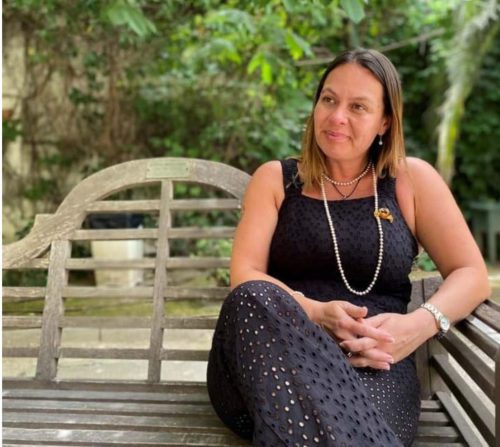 interview subject
ALIKA KINAN is a women’s rights activist, a survivor of human trafficking and sexual exploitation, and an advocate of prostitution abolitionism.

She leads the Alika Kinan Foundation and directs a program at the National University of San Martín de Buenos Aires that studies, conducts research, and trains on human trafficking.
background information
Human trafficking is a modern form of slavery that affects every country in the world and whose victims are, for the most part, women and girls. It is a crime within organized crime, prohibited by an international Convention – the Palermo Protocol – and a violation of human rights.

According to Law 26,842 on the Prevention and Punishment of Trafficking in Persons and Assistance to its Victims (amending Law 26,364) trafficking in persons is defined as the process that involves an action (the offer, recruitment, transfer, and reception of people) for exploitation purposes, both within Argentina and to other countries. It is not necessary for such exploitation to occur in order to face a case of trafficking, but it is enough that there is such a “purpose” for exploitation.

Trigger Warning: This story includes graphic and sensitive content about the subject’s experiences being sexually trafficked.

BUENOS AIRES, Argentina – I am a woman, a survivor of human trafficking, a mother, and a partner. Human traffickers held me captive for 16 years because I was vulnerable and destitute. My experience could happen to anyone.

Many complex factors contributed to my victimization including poverty. Argentina’s socio-economic environment proved disastrous in the early 2000’s. On top of that, my parents just separated, putting me in a highly fragile situation.

Deceived into entering a brothel in South Argentina

At 20 years old in 1995, I left school and found myself homeless. A girl in similar circumstances approached me and said, “You are so pretty. You could make a lot of money and get out of your situation. Come with me to the opening of a bowling alley in the south.”

Struggling with a terrible state of desperation, nothing interested me at the time. I said, “If I go, what do I have to do?” I asked nothing else. The girl told me, “You’re going to stay for three months and collect all the money you need.”

They girl lied. Instead of taking me to a bowling alley opening, they took me to a brothel.

From there, every few months they paid me then sent me to a new location.

I arrived in place called Sheik – a nightclub in Tierra del Fuego. A dark place with dim lighting, many men entered the Sheik and drank alcohol. The women sat very neatly, and the owner brought me beers. I rarely drank alcohol before then.

After a while, I could barely move and felt immense pain because of the volume of men I was forced to be with. They would not let me close my legs. I learned this place ranked as a high-level brothel. They required us to exercise complete discretion.

The owner brought me ice from a supermarket bag and brutally instructed me to sit still.

I want to clarify that sexual experiences we found ourselves in should not be confused with desire, and that victims of trafficking may not be fully deprived of their freedom.

My handlers did not physically hold me captive. If they had, my case would include the aggravating circumstance of kidnapping on top of trafficking.

I fell victim to trafficking because I neither had a home nor a place to go. The traffickers told me nothing. We had no bond, but I did have a group of women in the brothel with me who shared similar stories. They became my support.

Although people generally think trafficking must include kidnapping, a more complex crime exists with little to do with physical abduction. Recruiting, transferring, and providing shelter for the girls creates a system we struggle to escape.

Rescued by the military, she refuses to be a victim of trafficking

The pimps prove very cunning in recruiting and sexually exploiting women. They understand our complexities, needs, and shortcomings.

For example, I feel love for those who exploited me for many years. I identified them as family. They occupied a place left empty by my own family. The pimp sees you, protects you, and takes care of you, but only as a commodity. When you begin to realize how the pimps manipulate women, it becomes terrifying.

In October 2012, the military forcefully entered the Sheik. I believed they intended to send me to jail. I felt confused when they separated the person in charge from the women. Later, we discovered the raid targeted the brothel owner.

That day, the military rescued me. I met a prosecutor who deeply understood human trafficking and victims’ profiles. She interviewed me and asked many questions. For 16 years, I never stopped to think about or analyze my situation. She made me do that.

The prosecutor asked questions like, “If you are not a victim, and do not want to admit you are victim of trafficking, then tell me, what do you know about Tierra del Fuego?” I realized, despite living in Tierra del Fuego for many years, I knew nothing about it. I only ever went into the supermarket and the underwear stores.

The prosecutor asked me other questions about my family history. I told her my mother and aunt engaged in prostitution. She said, “If you have all female daughters and you prostitute yourself, what will your daughters do if their mother is a prostitute?” I felt ridiculed and offended, but it made me see.

I began to explore my own past and consider the future. For 16 years, traffickers held me captive. They sexually exploited me in the same brothel in the south of Argentina and Spain for eight years as a sex slave.

Prostitution exists everywhere in Argentina. Some girls prostitute themselves just to pay for their studies and to live, eat, and sleep. I began wondering why we feel grateful exploiting our bodies when we have no financial support or employment opportunities.

My answer felt radical: Prostitution is not a choice. It picks its victims.

Suppose we set up various campaigns to discourage the consumption of prostitution throughout Latin America. We could reduce the number of victims of trafficking. Women should be able to decide how to use their own bodies, but the traffickers decide for us.

Today, I take action to make change. For years, I have led the Alika Kinan Foundation against pimping. Now, I am the Director of a program at the National University of San Martín de Buenos Aires that studies, conducts research, and trains on human trafficking. My studies and my daughters motivated me to get out of sexual exploitation and do something.

My case became the first ever to achieve a conviction against my pimp and the State. It marked the first occasion a victim won. Very few victims can win these kinds of lawsuits because they find themselves alone, and their families blame them for their exploitation. Also, by leaving the work, they no longer have the economic resources to support themselves and their families. I won because I had significant support.

We must provide victims with economic resources, emotional support, and protection. Trafficking serves as an economic crime while also harming human dignity. However, victims fear filing a complaint because we might lose our lives trying. We believe our pimps will kill us. We become frozen and cannot move forward.

I was the first victim to make an economic claim for the years of exploitation and torture I suffered. This is unique in Argentina, Latin America, and even throughout the world. From that moment, I started thinking about judges compensating victims who suffered from trafficking.

My work today, along with others, proves a historical moment. We are mapping a reparation system for prostitution, human trafficking, and sexual exploitation.

In another story brought to you by Orato World Media, a Venezuelan woman escapes sex trafficking in the Bahamas.