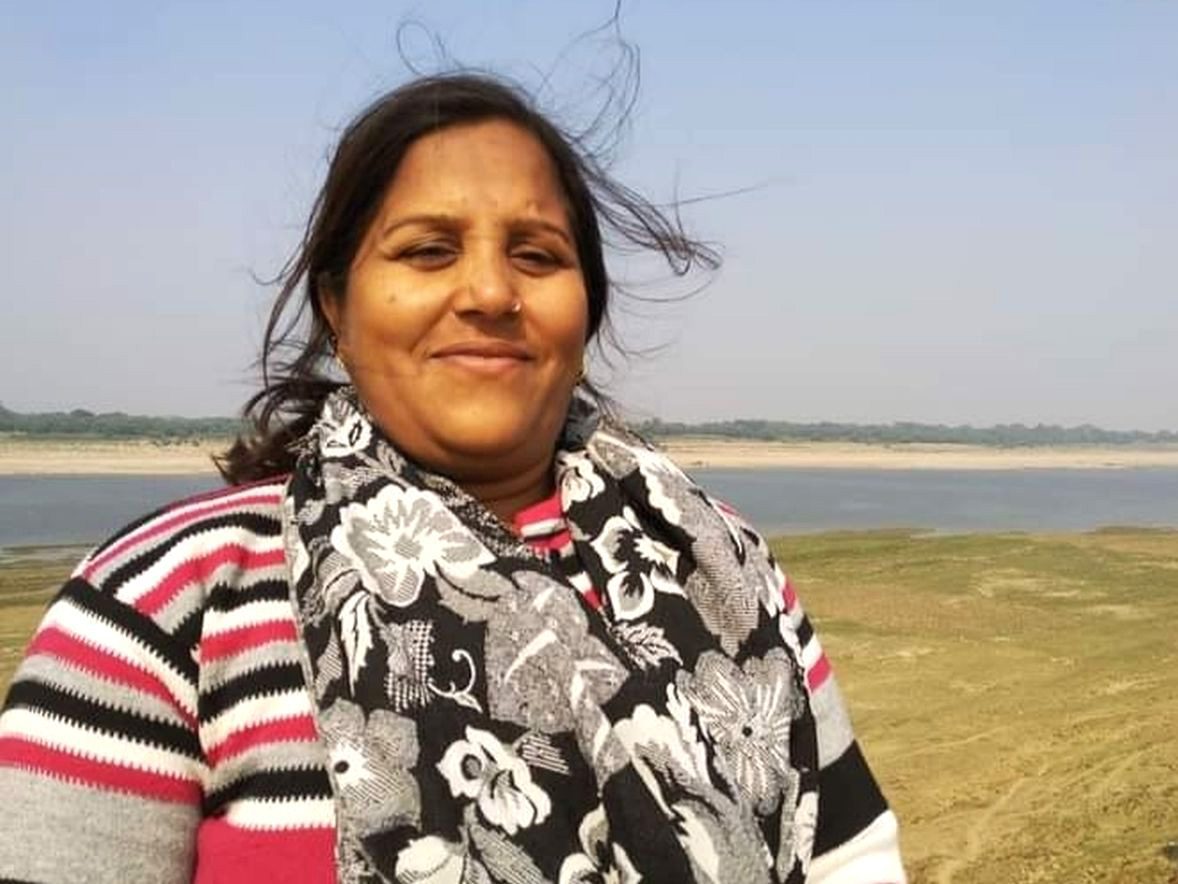 A survivor of child marriage, domestic violence and marital rape, Geeta is now independent and works as chief reporter for Khabar Lahariya | Photo courtesy of Geeta

My husband, 10 years my senior, shouted at me for no reason. He would often beat me with his belt and throw me out of the house. Other times, he would grab me by the hair, throw me on the floor, get on top of me and choke me. 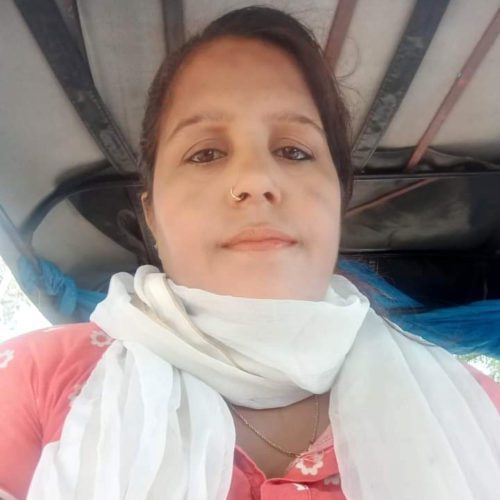 Interview Subject
Geeta, 33, was married off when she was 15 years old to a man 10 years her senior. She suffered domestic violence for seven years before finding the strength to divorce her husband.

Today, Geeta works with Khabar Lahariya, a woman-run Indian newspaper and digital news outlet, as a chief reporter. She has fought patriarchy and gender stereotypes while raising three children on her own.
Background Information
In 2018, India was named as the most dangerous place in the world to be a woman by a Thomson Reuters Foundation poll. A 2020 study found that one in three women in India has been subject to domestic abuse in her lifetime. As few as 1 in 10 women report the violence, and when they do, police are often unsympathetic and unhelpful.

When dealing with these conditions, verifying a subject’s account through courts or law enforcement records becomes challenging. However, many witnessed the crimes outlined by Geeta including village elders, neighbors, and family members. As part of the verification process, the author obtained the identities of the witnesses. To protect them and Geeta, whose last name is not revealed here, those witness names will not be published.


Khabar Lahariya is a collective of rural, often lower caste women journalists who run an independent weekly newspaper and robust digital news platform, focusing largely on local news and rural issues. Everything on Khabar Lahariya is written, edited, produced, distributed and marketed by women throughout India’s small towns and villages.

UNICEF estimates South Asia has the highest rates of child marriage in the world. Almost half (45%) of all women aged 20-24 years reported being married before 18. Nearly one in five girls (17%) are married before the age of 15. The National Crime Records Bureau of India reported 6,966 dowry deaths in 2020. In other words, about 19 women lost their lives every day for dowry.

The Committee on the Elimination of Discrimination Against Women (CEDAW) recommends removing the marital rape exception from IPC 375. The section of the Indian Penal Code that defines rape considers forced sex in marriages as a crime only when the wife is below age 15. Therefore, it’s still legal for Indian men to rape their wives as long as they are older than 15.

New Delhi, INDIA – I was 15 and had just passed my eighth-grade exams when my father ordered me to marry the man he selected for me.

A mere child, I was unable to make my own decisions. I was not ready to have a husband; I did not know what marriage, sex, or childbirth entailed. Yet, I endured all these things. I was robbed of a chance to learn and grow.

Years of physical and sexual violence

When I moved into my in-laws’ house after the wedding, they subjected me to excruciating physical and mental torture because they said I hadn’t paid an adequate dowry.

It was clear to me that they didn’t need a daughter-in-law. They simply needed money.

My husband, 10 years my senior, shouted at me for no reason. He would often beat me with his belt and throw me out of the house. Other times, he would grab me by the hair, throw me on the floor, get on top of me and choke me.

Whenever I talked of separation, he threatened to kill me as well as my only brother, and hit me even harder.

I began to question my self-worth and thought of committing suicide many times. Overwhelming feelings of embarrassment and shame kept me from sharing what I was going through.

My sobs each night went unheard. I covered the bruises on my body, but my face also bore the marks of the violence, so I was not allowed to go outside.

I was essentially a slave—I had no choice but to tolerate the abuse every day. So I suffered in silence.

I now have three sons. But they were born out of marital rape, not love.

All feelings of affection were absent between me and my husband. He would often force himself on me for sex. He treated me as his property. My consent, or lack of it, meant nothing to him.

My world was full of darkness, agony, anxiety, fear, and helplessness. All I could do was pray.

A first attempt to flee

Despite the case of abuse, I found no support or sympathy in my own family.

Whenever my husband brutally beat me, I would share my pain with my parents.  Instead of giving me a shoulder to lean on, they told me to endure, to continue living with him and tolerating the abuse. They said that this happens in every household and that it was my duty to work at the marriage.

I couldn’t bear this existence anymore. It was killing me. But I had nowhere to go. Who would feed a woman with three children?

One day, when my husband threw me against the wall, I decided to leave for good.

He asked me to get money from my father as an additional dowry. When I didn’t come back with it, he appeared at my parents’ home the next day. I refused to go with him, saying my father didn’t have the means to pay and that I would return when he could send the money.

For about five months, I stayed at my parents’ home. During that time, the village chiefs intervened to help us reach a compromise. Finally, my husband promised to behave; he said all the right things to get me back in his possession. I agreed to give him another chance.

Back-breaking labor to support my family

However, my husband turned into the same old monster in less than a month. He also quit working and pushed me to take on work to run the house.

I can never forget those days. I worked as a construction laborer doing back-breaking, manual tasks I never imagined I could or would do. My duties included removing concrete debris, loading heavy building material on my head, and helping move heavy equipment. Painful blisters bloomed along my palms and feet. That didn’t stop the abuse at home.

One day, my infant son passed a stool in his pants. My husband called me from the construction site to clean him. I rushed home immediately to care for my baby, but I didn’t have time to change his clothes. As a punishment, my husband held my hair and slapped me until I blacked out. I tried to retaliate, but he was too strong. I returned to work with bruises on my face.

My family eventually heard about me working on the construction site. One day, my cousin visited us and called me a blot on the family name for working a low-grade job. He asked me to go with him, but I refused as they were only concerned about their family image and not what I was going through.

They didn’t want to help a domestic violence victim, but would support me in leaving the job as it brought them shame in society.

When my cousin saw I was adamant, he promised to give me the respect I deserved. I warned him: either take me home never to return or don’t take me at all. He agreed. And I left my husband forever.

One last fight for freedom

My father arrived the next day. We went to the police station to file a formal complaint. When my husband was summoned, he asked for a compromise again. I refused. I was at my limit—I had no strength left to endure the abuse.

To my horror, the lady constable slapped me twice on my face for not agreeing to my husband’s offer. She told me I must submit to his demands and that “it was just a domestic violence case.”

They forced me to sign the compromise papers. But the moment I was out of the police station, I ran towards my home. My husband stopped me mid-way and tried to grab my hair. This time, thankfully, my cousins, neighbors, and my father rushed to save my life.

He found himself facing the crowd alone and let me go. That was the last day I or my children lived with him. We separated for good in February 2009.

Once abused, now I am unstoppable

I was at a crossroads; a divorced woman is taboo in Indian society. Though I wanted to be independent, my lack of education crippled my prospects. By chance, a relative suggested I join Khabar Lahariya, a collective of rural women journalists.

At times of desperation, all you need is a little hope. My life took a turn for the better after Khabar Lahariya welcomed me with open arms.

Initially, I covered crime stories and women-related issues. I faced all kinds of threats and harassment. Many tried to bribe me from exposing their evil acts. But I didn’t stop—I had nothing to lose.

I started working as a journalist to prove my self-worth. If I earned my own money, I knew I could empower myself and live a happy life. In India, women like me, living with their parents and without in-laws to support them, are considered a burden.

Now, it’s been 12 years of freedom and empowerment. Though I ended my traumatic marriage, I still battle society’s expectations and outdated thinking.

When I go out in the village, I get comments like “poor woman” and “how bad, she is walking alone.” They ask about my marital status. Some pity me when I say I have divorced; others get offended at me for leaving my husband. They judge me, my character, and the way I dress.

I cherish one victory, however: I have changed the way my family thought of me, women in general, and their perception of a married, working woman.

My father was annoyed when I joined Khabar Lahariya— he said it wasn’t necessary because he could provide for me. He clashed with my mother for “spoiling me” and didn’t speak to me for days. But when he first read my name in the newspaper, he changed his mind.

It is difficult to break the chains of patriarchy in India, whether your own parents or parents-in-law. But I prove every day that it’s possible.