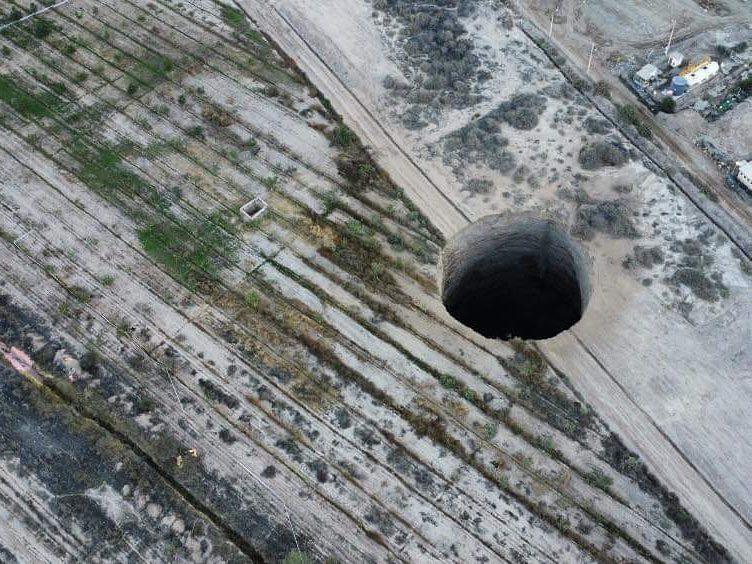 Those of us who live close to the hole met with workers from Candelaria. They assured us we faced no danger, but I do not believe them. Years ago their multi-million dollar contract gave them access to all the silver in the ground and left nothing for the people. 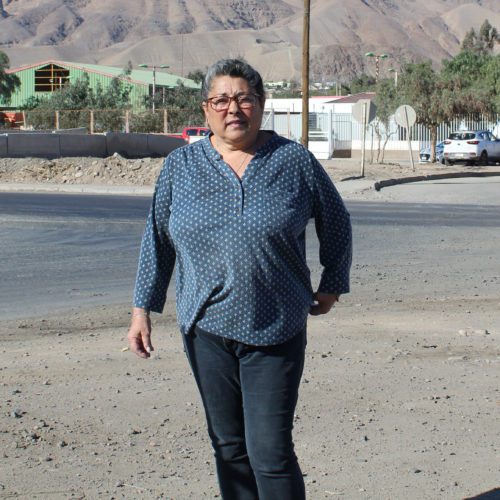 Interview Subject
Delfina Marcoleta has lived her entire life in Tierra Amarilla, Chile. She is a housewife who now fears her house will collapse and struggles to sleep at night, after a huge sinkhole appeared near her home in July.

She says the hole has grown since it first appeared. She lives with her family in the same house she lived in as a child. She worries she may have to change her entire life and leave all her memories behind, in order to feel safe again.
Background Information
This is the sixth sinkhole in Tierra Amarilla. The first appeared in 1993 in a mining sector located 800 meters from the city, after a mining site collapsed and was closed. In 2013, several more sink holes appeared – one of them in the patio of a house, another at the entrance to the urban area, and the largest just 500 meters from the city limit. This caused great alarm amongst the population.

At the time, authorities and the large transnational mining company ordered a study and claimed there was no mining work below the urban area. With the appearance of the new hole, national and international experts asserted a new study should be carried out due to previous impartiality.

It appears authorities are investigating the mining company, stopped its work, and pointed to over-exploitation in certain areas. In the last week of August, Sernageomin declared a new alert in the face of additional cracks just 60 paces away from the subject’s home.

TIERRA AMARILLA, Chile ꟷ On July 30, 2022 an enormous sinkhole appeared in the ground 600 meters (less than a half mile) from my home. The hole, which is 36 meters in diameter and 60 meters deep, distresses me from the moment I wake up until I go to bed. If something happens during the day, I can act but I fear sleeping at night.

An announcement appeared in the newspaper declaring a major emergency with a nearby mine, which is suspected to be the cause of this and other sinkholes. The article instructed citizens not to enter the mine due to the danger of collapse. My community and I feel stressed and afraid.

I spent my entire life of 57 years in Tierra Amarilla. Thirty years ago, the mining company arrived. Before they came, our people lived in the valley, full of pure air and a sense of calm. When the mines came, we did not know how to organize ourselves. They brought wealth to our very poor region and citizens believed the illusion that the big mining company would give work to our husbands and neighbors.

Since that day, more miners came and exploited our town. First they settled in Tierra Amarilla, then Alcaparrosa. Soon they moved into Santos, Ojos del Salado, Carola, Pucobre, and Atacama Kozan. Everywhere we looked, mining exploitation surrounded us.

Soon we found ourselves living in a polluted place, constantly suspended in dust, plagued by unbearable blasting which feels like a grade six tremor. Though we became somewhat used to it, when relatives visit from Santiago, we see their fear. When the blasts go off at 3:30 in the afternoon or at 7:00 or 8:00 in the morning, we tell our guests not to be scared.

Children become startled at first, when they hear the sounds and feel the ground shaking. Peace no longer exists here.

The first sinkhole appeared in 2013 at the Santos mine. No one understood what happened. The people who lived there were forced to leave and redistribute to a newly created village called Los Aromos. Sernageomin (The National Geology and Mining Service) delivered no data at that time. As a result, the people do not trust the studies being done by them and by Candelaria (the Canadian mining complex under the parent organization Lundin). We want independent studies.

Those of us who live close to the hole met with workers from Candelaria. They assured us we faced no danger, but I do not believe them. Years ago, their multi-million-dollar contract gave them access to all the silver in the ground and left nothing for the people. I question the presence of water in the sink hole. Leaked videos appear to show a frightening amount of water, after we heard assumptions that the ground was dry.

Chilean President Gabriel Boric promised to invest resources into further study of the sinkhole. We want to know if there are tunnels under the city. If a worker enters the mine in Alcaparrosa and exits at Santos, it seems like they would have to pass right underneath us. If the tunnels exist and water floods them, it has to come out somewhere. Now, new cracks appeared in the ground in a circle. It looks like another sinkhole forming.

Jessica Acuña Neira, journalist, and writer, lives in Copiapó, in northern Chile, in a valley in the middle of the Atacama desert. She specialized in narrative journalism. Also, she is the author of the books of chronicles "Waves of clay," "They live in our memory," "Ancestral knowledge of the Colla people," and co-author of "Historias del Río Copiapó." Jessica has her own blog and studied Journalism and human rights at the Inter-American Court of Human Rights, Investigative Journalism at the Unesco GMDF program against impunity for attacks on journalists, and Narrative Journalism in Argentina. She has worked in several media from her country; She recently was editor of the Diario Atacama, where she wrote local and national impact news.
Start typing to see results or hit ESC to close
Latin America Argentina Africa Asia Women's Rights
See all results