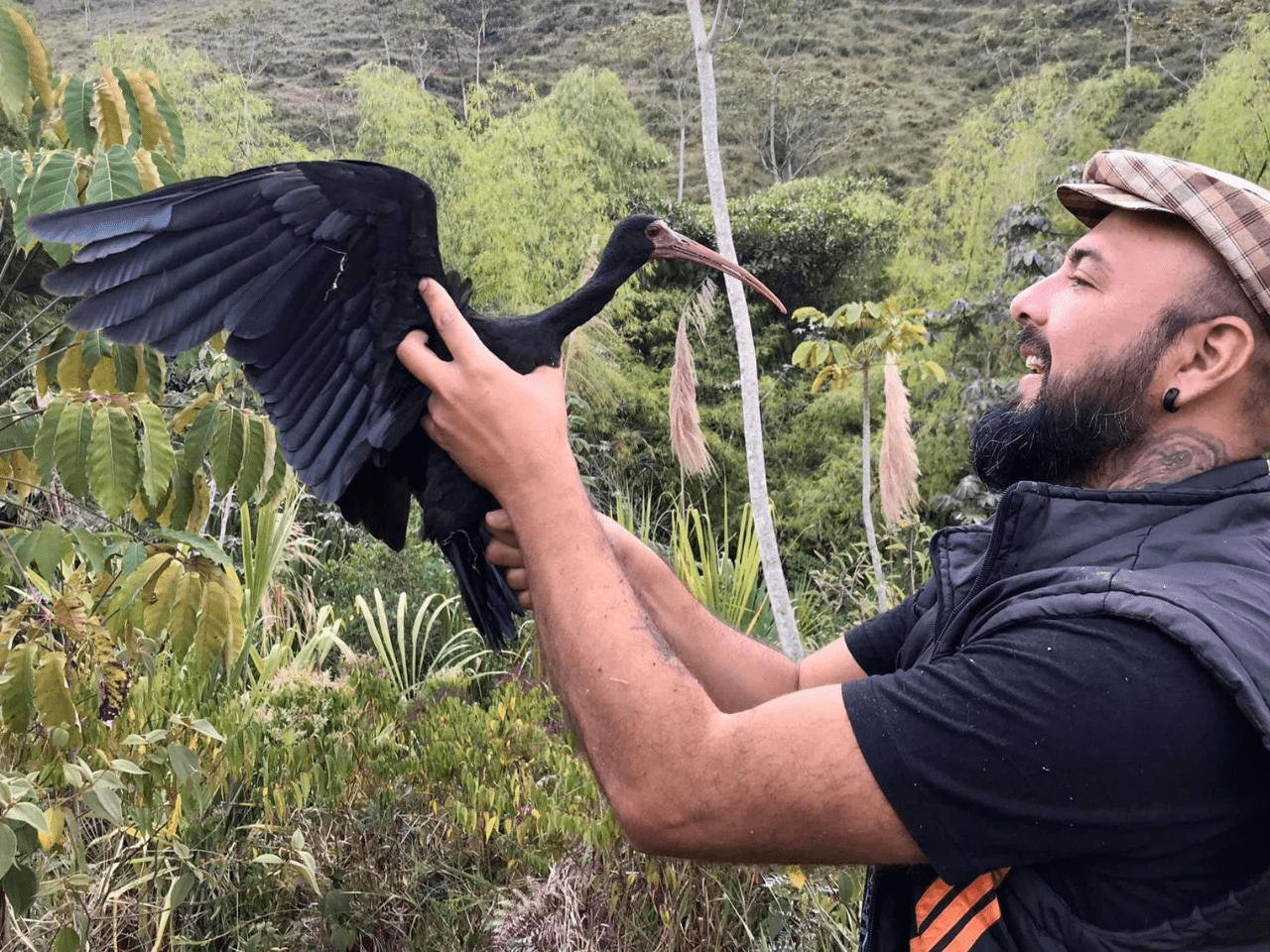 When I look around and see the animals that accompany me on this mountain I call home, they fill me with satisfaction. I see blind, disabled, and elderly animals enjoying a second chance; enjoying their freedom. We live surrounded by greenery, fruit trees, vegetation, and fellow creatures. 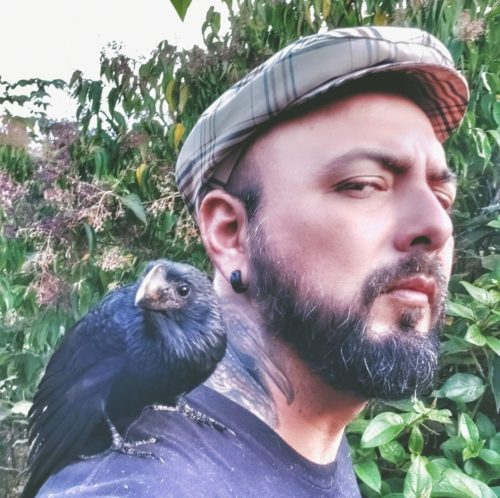 Interview Subject
Davis Beltrán started the project Casita del Bosque to protect the fauna and wildlife in Colombia, especially stigmatized animals. He is passionate about the environment and educating society on the welfare and care of wildlife. He is pictured above with Elvis, the bird that inspired his work.
background Information
Wildlife trafficking is a prominent criminal market in Colombia, one of the most biodiverse countries in the world. This illicit business destroys ecosystems and puts species at direct risk. The lack of social strategies to deal with this problem makes it difficult to recognize this phenomenon and limits the fight against it. In addition to this, the stigmatization of certain species prevents and affects the survival of local species that play fundamental roles in their environment.

DAGUA, Colombia ꟷ I started a wildlife rehabilitation project in Colombia to focus on the protection of animals and to offer education promoting respect of our sister species. At the age of five, I watched as my mother took a chick in her hands and ensure his survival. I felt like I witnessed a miracle. Soon, I started bringing her all the chicks I could find in my rural neighborhood of Terron, Colorado.

Each time it rained, or a storm hit, the chicks were injured. Together with my mother, we helped them survive. At that moment, I discovered my passion.

In Colombia, few projects exist to protect the welfare of wildlife. Most programs focus on rescuing cats and dogs. I started La Casita del Bosque to denounce the practice of purchasing wildlife like parrots for pets, and to educate the community. For every parrot that arrives in a home, hundreds die in the trucks that traffic them. It endangers the survival of the species.

We focus on preventing wildlife from ending up in the hands of children and as family pets, so they can live freely and avoid human dependency.

As farmers, my parents taught me to rescue orphaned birds that appeared on the road. An eagerness to protect wildlife emerged in me at a young age. At 19 years old, I worked in a zoo and a government program. I slowly began to realize the irregularities and bad practices carried out by officials in animal rescue. Serious mistakes interrupted the care plans for these animals.

Too often, officials focused on saving the beautiful and colorful animals, those which society marveled at. Meanwhile, opossums, frogs, buzzards, and mice were discarded. I began my work rescuing stigmatized animals – the ones considered ugly, scary, dirty, or worse. Some stigmatized animals bare the burden of being viewed as devils in Colombia.

When my work began, I found no organizations dedicated to helping opossums. No veterinarians, rescuers, biologists, or non-profits helped these creatures. They became systematically violated, with no one to turn to. I finally reached out to a foundation in the United States dedicated to protecting the species. They sent me a wealth of information on how to rehabilitate opossums and what procedures to follow.

Once I began rehabilitating the animals, I spread a message of love and respect for them. When I walked around my neighborhood with an opossum on my shoulder, people looked shocked. They assumed opossums should be killed and compared them to giant rats. I took the opportunity to educate, explaining the opossums’ role in the balance of our ecosystem. Opossums, for example, help control the population of African black snails. Unregulated, the snail could wreak havoc on our ecosystem.

A bird named Elvis inspires the people, but falls victim to stigma

In my area, the scourge of crime and drug addiction sweeps our streets. As I walked through the neighborhood with an opossum I rescued, people stood back consuming their drugs. As we talked, they promised not to kill the animal anymore. Soon, they began observing the wildlife and even leaving fruits nearby.

A local change took hold and today, we now have national programs for the conservation of opossums. They recognize our program as the first of its kind, playing a key role in removing the contempt people had for these marvels of nature.

Likewise, we began working on education around other animals. For example, many in our country associated witchcraft and curses with the turkey vulture. [By cleaning up dead animals, turkey vultures remove carcasses that would slowly deteriorate creating longer and worse smells in the environment.]

Similarly, I can never forget an inspirational bird named Elvis. Elvis changed my life and the trajectory of La Casita del Bosque. Many locals consider this black bird a bad omen. Crows do not exist in Colombia. Elvis was a Crotophaga [a genus of the Cuckoo family]. Birds like Elvis move in flocks through the forest and often control other species of birds. They hunt lizards and insects.

Elvis lived in our community and became friendly with the people who highly regarded him. Neighbors enjoyed him so much; they started a group and shared moments when they encountered him. Often, when he found himself in dangerous situations, I ran to his aid and freed him.

Sadly, Elvis did not survive. He fell victim to stigma and lost his life, but he continues to inspire our work every day. For Elvis, I continue to carry my message forward to teach as many people as possible to prevent violence against wildlife.

Building an animal sanctuary on a mountainside in Colombia

I want to erase the legacy – which often came from church teachings – to believe we humans are superior beings. Sadly, many humans dedicate their lives to hunting, mistreating, and exploiting nature. I believe we must respect other species; that we all have the same rights and are equal in nature. Without wildlife, we could not live. Animals deserve respect, regardless of appearance.

From a systemic standpoint, policies and structures must change. In our country, political levers often lead to the appointment of cruel people over the entities vital for the protection of animals. While some elected and public officials care, mediocre ones often end up in control. They chose mechanisms like euthanasia and irresponsible releases because it’s easier.

Staff need to be responsible for more than just end results; they must ensure the welfare of the fauna and ethical and responsible rehabilitation. Veterinarians and technicians from public and state entities and institutions do not use good and effective care strategies. They put the animals under unnecessary stress and handle crates irresponsibly, as if they were mailed packages.

The mere fact that a wild animal finds itself in human hands puts it under immediate stress. We owe them fair treatment and not further traumatization.

When I look around me and see the animals that accompany me on this mountain I call home, they fill me with satisfaction. I see blind, disabled, and elderly animals enjoying a second chance; enjoying their freedom. Together with them, we live surrounded by greenery, fruit trees, vegetation, and fellow creatures.

We have our mountain, and we continue our work. This place has become our home and the 100 animals here are my family. We look forward to the day when this mountain will flourish with children and families eager for education. This is a piece of land worth living on.

Lieth Daelyn Carrillo Sánchez is a Colombian anthropologist and researcher who studies the dynamics of violence, conflict, and criminology in Latin American countries. She writes because she believes that words allow us to build and rebuild the world.