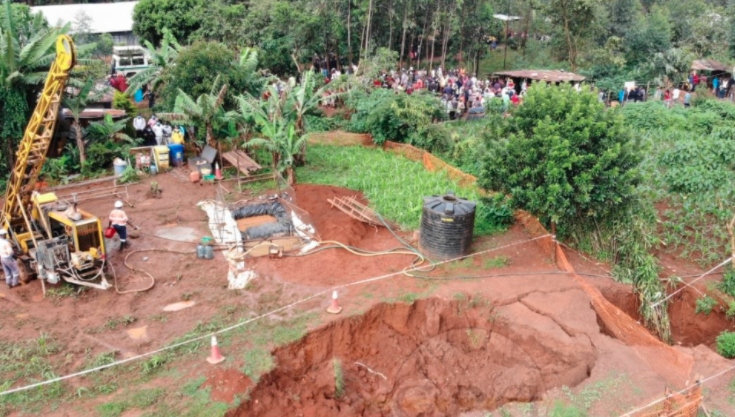 Fallout from the collapsed gold mine in Kakamega. | Kelly Ogome

We mine pure gold and we are dying, not because we love mining, but because it is our only source of income here. 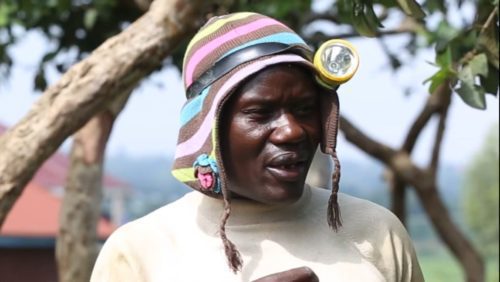 Interview subject
Andrew Ngaira is one of five children who were raised in the illegal gold mining business by their late father Stephen Ngaira.

Andrew lost his two brothers to a gold mine collapse.
Background
Kenya records at least two dangerous mine collapses on average every year, usually during the rainy season. It’s estimated that the country has 80,000 artisanal miners with a large percentage hailing from Kakamega and Migori Counties on the shores of Lake Victoria.

The numbers vary per year, for example, from January to July 2021 at least seven people have died in collapsed mines according to local authorities. The numbers could be higher as some cases go unreported because the majority of miners are illegal immigrants from neighboring Tanzania. On February 6, 2021, four miners were killed in the Migori region.

The government’s primary role has been in retrieving bodies from collapsed mines. The Ministry of Mining is somewhat quiet on the subject. The National Environment Management Authority (NEMA) is the only government body that has taken some action to close illegal mines, make arrests, and address environmental issues.

According to the Kenyan National Bureau of Statistics, GDP from mining in Kenya increased to 15,023 million Kenyan shillings ($138 million USD) in the third quarter of 2020. Soda Ash mining, titanium mining, Fluorspar, and limestone are among the top minerals mined in Kenya, while gold accounts for a very small portion of explored minerals.

The surrounding communities depend on farming Sugarcane and Maize for daily survival.

KAKAMEGA, Kenya — On May 6, 2021, five people died in a gold mine collapse; two of them were my brothers.

That morning, Daudi and Abraham went to the Kakamega mine to look for gold, as usual. Our lives revolve around gold mines. Our late father joined the venture, and we grew up knowing nothing else.

We don’t keep cattle. We don’t grow crops. We risk our lives to go deep in the mines to look for the most precious mineral on earth.

When lunchtime came and my brothers did not return home, my mother set their meals aside. By five in the evening, we became worried, so I left for the mine where they were working.

When I arrived, all I could see was their tools on the surface – their spades and hoes and t-shirts. The whole place was muddy from heavy rains the night before. I suddenly realized the mine had caved in. I went into shock.

After a series of calls, the county rescue team arrived, but we knew this was not a rescue mission. It was a search for bodies.

The operation took longer than it should have, and the villagers came with a bulldozer to remove the heavy soil covering the miners.

After 18 hours of difficult digging in heavy rains, five bodies were retrieved.

According to accounts, there were only two people inside the mine.  When the supporting pillars failed to hold back the loose soil, three others rushed in to save their colleagues. All five men became trapped.

The business of gold

What my brothers were doing is considered illegal mining. Not long ago, officers from the National Environment Management Authority (NEMA), came to warn residents against illegal mining, but unfortunately, for many, it is the only economic activity available to them.

My brothers died working to put food on the table. I believe these deaths are preventable. The same government that warns us against mining, mines for huge money from brokers.

We sell the gold at a throw-away price. For example, we may spend an entire day without collecting even a gram of gold, which we would sell for 3,500-4,000 shillings ($32-37 USD). The brokers, on the other hand, sell the gold to Indians in Nairobi at double the price.

We mine pure gold and we are dying, not because we love mining, but because it is our only source of income here.

I’ve heard of people dying in the gold mines since I was a little boy. I have attended burials, but at no point did I think the mines would cave in on the people I love the most.

This year I lost my brothers, despite all of their training. Nothing could save them. 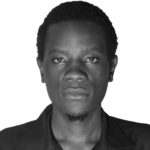