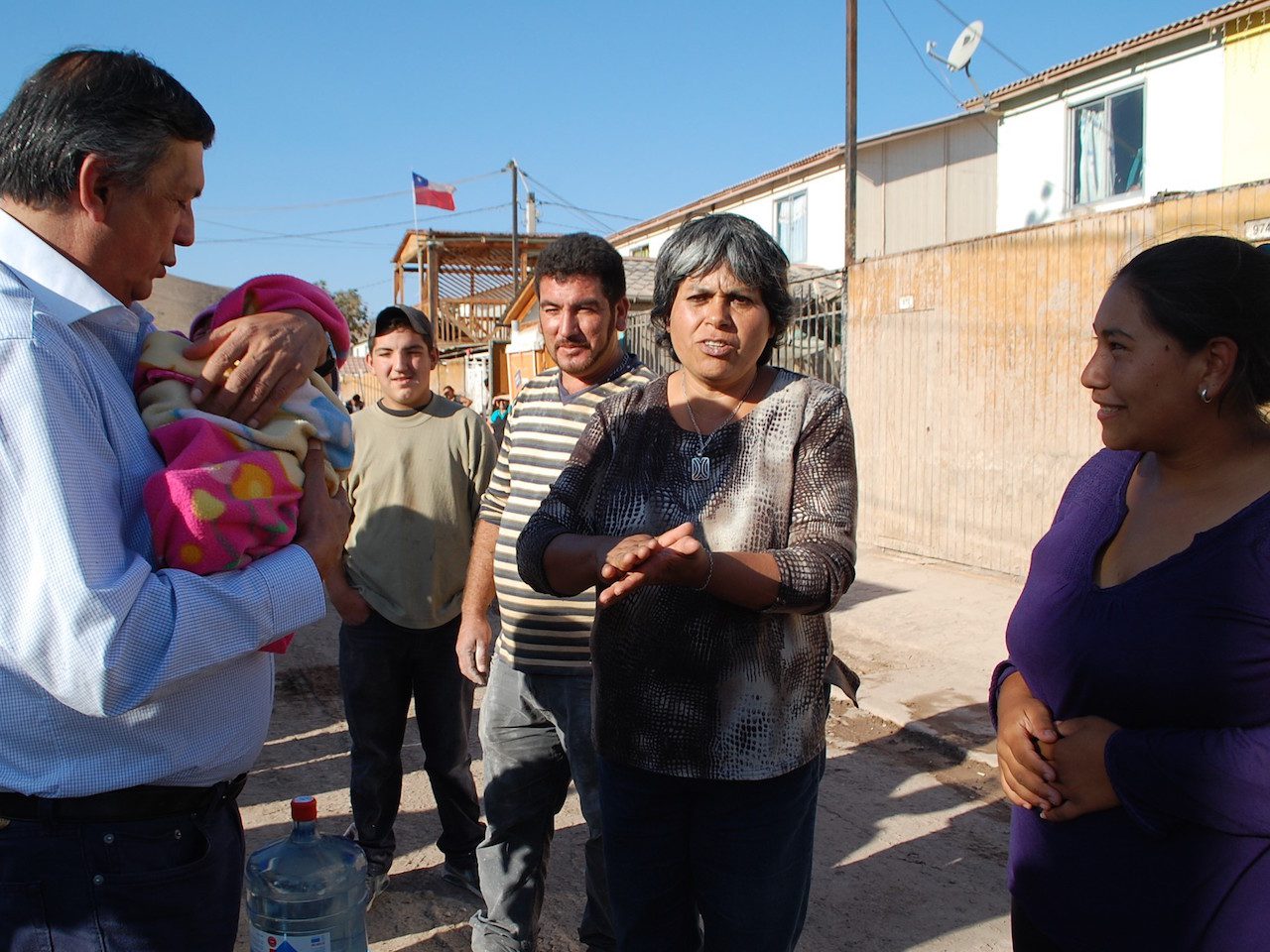 On the left, Camila received water from cistern trucks, with Yovhanela in the arms of a local deputy, in 2015. | Jessica Acuña Neira

Camila Abarca went to bed in March 2015 not knowing her town would get flooded and that she would have to run up a hill to give birth. 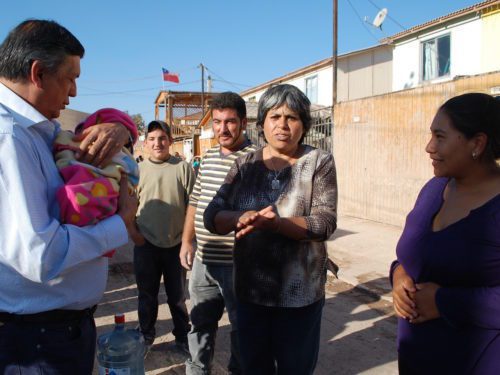 Interview Subject
Camila Abarca Ubilla, now 24 years old, is a young wife and mother of two who lives in Chile. During the catastrophic floods in northern Chile in 2015, she gave birth to her daughter in the midst of the crisis.
Background
The floods that occurred in Chile in March of 2015 took place in the Atacama desert and several of its cities and towns. Rains are an exception there and people live in valleys in the middle of the desert.

The warm rains with high humidity were very intense and snow had not precipitated in the mountain range as usual. As a result, the water ran heavily through various streams and overwhelmed the area. The floods affected 16,000 people, of whom 31 died and 16 went missing. Tremendous destruction led to a long recovery and reconstruction period.

COPIAPÓ, Chile — On March 25, 2015, a raging rain unleashed on northern Chile. As the minutes passed, the mud in the streams transformed into rivers, swollen with water.

I never imagined I would give birth to my daughter in those conditions.

I had a beautiful pregnancy and waited a long time for Yovhanela, my sweet little girl, to be born. Not even in my worst nightmare could I have anticipated this.

A paramedic, guided by a midwife on the telephone, delivered my baby in a makeshift shelter on a hillside.

A daring escape leads to labor and delivery in a flood

The night the rains began, I went to sleep in anguish. I understood that [due to the storm], not everyone would be safe in their homes, but I had to focus on my pregnancy. I went to sleep.

It was not long before my father woke me up. The water was entering our house. It had flooded so fast nothing could be done. I looked towards the couch and saw my little son completely surrounded by water.

Together with my sister, we grabbed him and ran to the second floor. Despair washed over me. After years of work, our home was destroyed in a matter of minutes. We spent the whole night upstairs.

At dawn, it was still raining. By dusk, my in-laws picked us up to take us to a shelter for flood victims. The flooding water had lowered but the streets were still canals, even to the base of the hill. It was there, the government built a makeshift shelter.

When I arrived, plunging back pain prevented me from falling asleep. I thought it was from my nerves and all the movement. The pain became more intense, so I asked to call one of my neighbors who is a paramedic.

He examined me as soon as he arrived and indicated I was in labor. My daughter would be born that night. I did not want to deliver my baby on the hill. It was a worst-case scenario, but when the contractions came, there were no more doubts.

There were about 50 people in the shelter. Someone called the hospital emergency room. I thought they would send a helicopter to look for me, but no one came.

I kept thinking about the complications that could occur, and I began to cry. At 4:30 a.m., with hot water and clean rags nearby, I went into labor.

Brunilda González, my midwife, was on the phone. She talked the paramedic through the delivery. After almost an hour, Yovhanela was born.

I felt the joy of all the flood victims that night. The shouts of applause when my daughter was born could be heard across the hillside. People hugged each other out of happiness.

After she was born, I held tight to Yovhanela and could only sleep when she was with me. At 2 p.m., a helicopter arrived and transferred us to the hospital. I was still muddy and unrecognizable outside.

We touched down and followed the road in an army truck the rest of the way. You could see the catastrophe everywhere.

The hospital entrance was flooded with thick mud and the elevators stopped working. They carried me up the stairs in a wheelchair to the second floor, where they cleaned us.

The next day, we were discharged. We could not go home; the house we left behind was uninhabitable. Our only option was to wait at the shelter.

Improvements made but climate change could lead to catastrophe again

Six years have passed since the floods. There were thousands of victims, many people died, and 2,000 homes were destroyed.

We spent months without a supply of drinking water. The sewage system collapsed and electricity was down for weeks. We were on the brink of a health crisis.

Since then, the government has increased infrastructure capacity, but it continues to be insufficient.

We survived, but we do not live safely. With climate change disrupting weather patterns, heavy rainfall could produce catastrophe for my people again.

+ posts
Jessica Acuña Neira, journalist, and writer, lives in Copiapó, in northern Chile, in a valley in the middle of the Atacama desert. She specialized in narrative journalism. Also, she is the author of the books of chronicles "Waves of clay," "They live in our memory," "Ancestral knowledge of the Colla people," and co-author of "Historias del Río Copiapó." Jessica has her own blog and studied Journalism and human rights at the Inter-American Court of Human Rights, Investigative Journalism at the Unesco GMDF program against impunity for attacks on journalists, and Narrative Journalism in Argentina. She has worked in several media from her country; She recently was editor of the Diario Atacama, where she wrote local and national impact news.