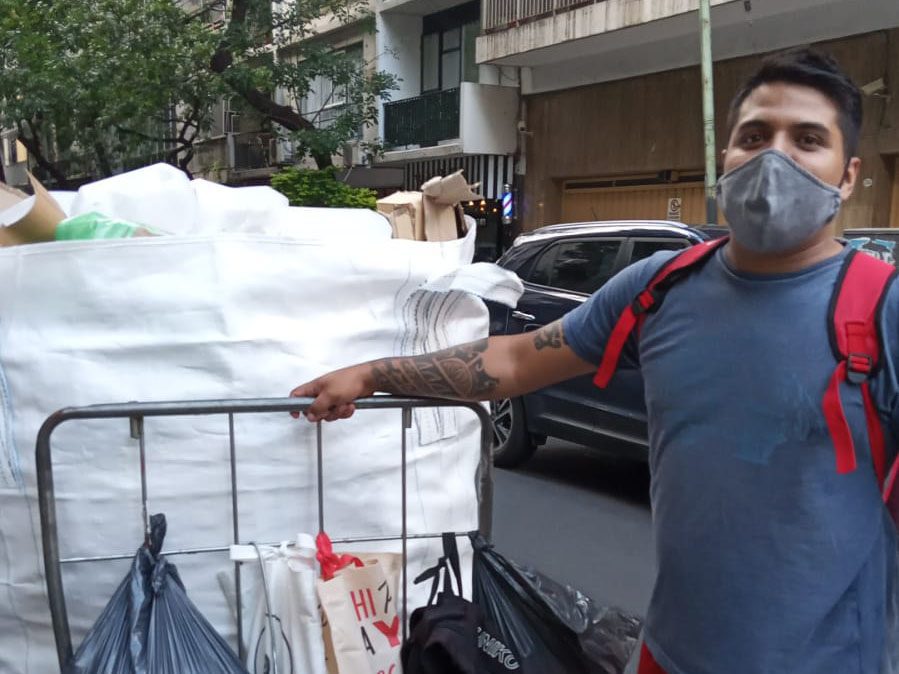 While some people throw garbage right on top of us, others leave quickly when they see us in the dumpster. They prefer not to speak with us or experience an uncomfortable contact; embarrassed to ask permission to drop the garbage in. 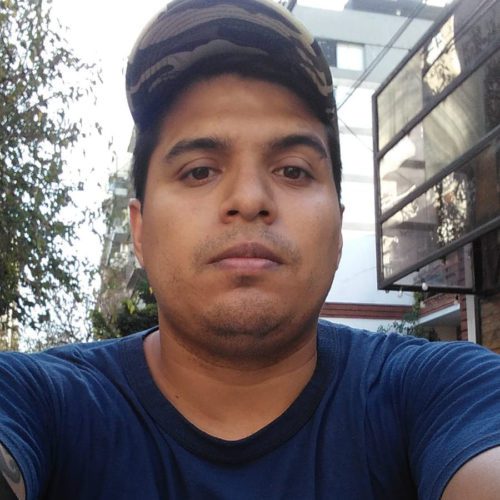 Interview Subject
Alejandro Sabater, 29, lives in José C. Paz, Buenos Aires Argentina. After losing his factory job he became a cartonero, or a salvager who collects cardboard and other recyclable material out of garbage bags and dumpsters and sells it. The flexibility has allowed him to begin working toward a college degree.

He began posting videos on TIKTOK about recycling cardboard and gained over 11,000 followers and over 110,000 likes early on.
Background Information
Movimiento de Trabajadores Excluidos or The Movement Excluded Workers is a social organization in Argentina where thousands of people, discarded from the formal labor market as a result of neoliberal models, come together.

BUENOS AIRES, Argentina ꟷ After losing my factory job, I became a salvager in Argentina, digging through garbage bags to find cardboard.

Salvagers work hard every day, climbing into garbage bins and opening bags. Sometimes people throw garbage right on top of us. The public looks at recyclers with discomfort, assuming we have no homes. People yell from their cars, honk their horns, and throw insults, but we work hard to prevent confrontation. Luckily, among the community of salvagers, we have immense solidarity. We are respectful and fair, helping one another so no one starves.

What people do not know is that I have over 11,000 followers on Tik Tok. I study programming and web development toward a degree in information technology. My video diary of salvaging in Argentina received over 110,000 likes so far. Around the world, people are curious about my life.

A day in the life of a salvager: digging through garbage

A typical day of salvaging starts at 2:00 p.m. We meet in Chacharita – a neighborhood in Buenos Aires which serves as the central location of our cooperative. I leave home at Noon to make the two-hour trek. At Chacharita, we receive our two-wheeled pull cart.

In the province where I live, very little cardboard can be found, so I search around Chacharita, Palermo, and Paternal. I typically travel eight kilometers (about five miles) and explore 80 dumpsters per day. This includes about two garbage bins per block.

I climb in the dumpster and begin checking, bag by bag – opening it to see what I find inside. Sometimes people leave the cardboard to the side or in a special green bin; but often, the cardboard mixes up with everything else.

While some people throw garbage right on top of us, others leave quickly when they see us in the dumpster. They prefer not to speak with us or experience an uncomfortable contact; embarrassed to ask permission to drop the garbage in.

We gather bags and flat material and must arrange it all on the cart carefully. We carry an immense amount of weight, which can be impossible to transport in a two-wheel pull car if not balanced properly.

When the cart is nearly full, I can pull as much as 150 kilograms (330 pounds) of material. By halfway through the route, I find myself exerting intense physical effort. Back at the cooperative, they help us unload and take the carts back.

My work as a salvager in Argentina began when I lost my job at a metallurgical factory. I had a decision to make. Exhausted and sore from working 12-hour days, I began searching for part-time work.

My brother had already begun working as a salvager, collecting recyclable material from garbage bins. He informed me I could work as much or as little as I wanted and get paid for it. Being self-employed would allow me to achieve my other goals as well, so I leapt in. The income covers my needs, and I went back to school right away.

We collect more than cardboard. As salvagers, we pile plastic, cables, and PVC onto our two-wheeled carts. Back at the cooperative, we separate out the materials and they buy it from us.

Salvagers like me replaced the old junkyards, which remained disorganized and offered no fixed pricing. The cooperative ensures fair, fixed payment and deposits the money biweekly into our bank accounts.

Once my work as a salvager began, I created a TikTok account. I wanted to share all the curious things I saw while working. My first shifts as a salvager surprised me. Climbing into garbage bins opening bags seemed very strange.

At first I made an anonymous account, uncertain I wanted people to know about my work. I uploaded content and educated people about the life of a “cartonero.” I shared what I earned, what I carried on my cart, and the tools I used. My work as a salvager helped me in my study of programming and web development.

When I find keyboards, mice, speakers, and other computer parts, I take them home and put them back together. All my equipment, including a pair of headphones, came from the garbage.

I feel surprised by what people throw away, including items in perfect working condition. Perhaps people feel those items are not modern enough. Once, I found a perfectly functional freezer. These are items I can sell or keep for myself.

People also throw away dangerous items like bags of glass or needles with no labels. We must remain extremely cautious.

As I continue to salvage and work toward my degree, I know I made the best choice. At home, I cook and spend time with my son. I’ve created and sold a few websites. I no longer work in a dead-end factory job that leaves me broke.

In the past, I felt exploited, disrespected, and paid the bare minimum.

Today I do something good for the community and feel part of something positive at the collective. Hope and happiness fill me today – for my future, and for my family.