On the tour, I came across sights that captivated me. Lake Atitlán in Guatemala presented a mirror of water guarded by three volcanoes. I crossed the trampoline of death in Colombia, an 80-kilometer precipice with room for only one car. 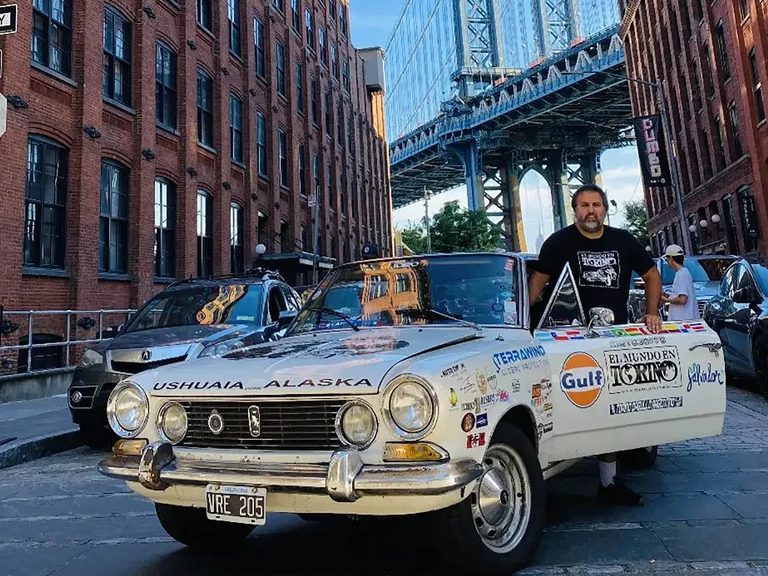 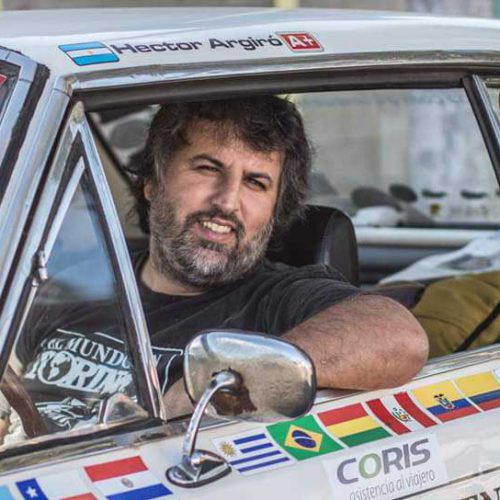 Interview Subject
Héctor Argiró, 46, is an Argentine born citizen who lives Tucumán and was raised in Buenos Aires. At the age of 25, he decided to study cartography. He worked with databases and at Navteq and TGS as a cartographer. He has already successfully traveled to fifteen countries and is continuing the journey into Europe.
Background Information
Cartography is the branch of geography that deals with the graphic representation of a geographic area, usually in two-dimensional and conventional terms. In other words, cartography is the art and science of making, analyzing, studying, and understanding all kinds of maps. Cartography is an old but current science. It tries to satisfy the desire of the human being to visually represent the surface of the planet Earth, something relatively difficult, given that it is a geoid.

CHICAGO, Illinois — I visited fifteen countries so far on my world trip in a 1969 Torino 380. I bought the car in 2006 and spent three years restoring it. The journey began from Buenos Aires to Córdoba to Ushuaia. Led by a dream, I soon traveled to Chile, Paraguay, Uruguay, Brazil, Bolivia, Peru, Ecuador, Colombia, Panama, Costa Rica, Nicaragua, Mexico, the United States, Canada, and Alaska.

Throughout my adventure, I had to abandon my car once in Canada. When the COVID-19 Pandemic ended, I reunited with it and continued my travels. I will soon head south from Chicago to Mexico.

My uncle Carlos drove a Torino and one day, when I was eight years old, he took me on a ride. As we moved down the street, he accelerated, and I felt the force of the car in my body. I thought, “When I grow up, I want one of these!”

At 10 years old, I watched car races on tv with my father. In our small apartment in the Munro province of Buenos Aires, I asked, “What road do the rally cars take to get to Cordoba?” He answered, “The Pan-American.” I pressed on. “And how far does the Pan-American go?

My father informed me it went all the way to Alaska. That little piece of information stuck with me throughout my life. I loved routes and maps, and an idea began to take shape in my mind. One day, I would arrive in Alaska in my Torino.

For years, the dream lay dormant in my mind as I dedicated myself studying and working. I once covered all of Argentina in seven trips on a small motorcycle. Then, in 2006, I bought my car. I restored it with the trip in mind, knowing it would need to be in excellent condition.

I dreamed of continuing my adventure without a time limit. So, in 2014, I set a date – as simple as that. Although it felt like a long time away, I traveled to Alaska in November 2016.

In preparation, I spent time getting the Torino ready, planning for my needs, and finding the best routes. I really learned what it is to travel. I picked my date to leave for Alaska because November 24, 2016, marked the 50th Anniversary of the Model 380. It presented the opportunity I always waited for. I would hit the road escorted by a caravan of Torinos!

With the journey planned, I separated from my girlfriend, quit my job, and began collecting money from my settlement. I left my house in Los Polvorines with just $3,000 and drove for Córdoba to the first motoring event, where cars from all over the country gathered. I learned quickly to carry the fewest number of items possible because I gave almost everything away along that first trip.

I traversed Route 40 and hundreds of other arteries, moving through my country from end to end. When I crossed Misiones, Corrientes, and Entre Ríos off my list (my last domestic destinations) I began my tour of Latin America with my ultimate sights set on Alaska.

Read interesting sports stories from around the world at Orato World Media.

I wanted to visit all the places I saw on the maps as a little boy. My route took me through Chile, Paraguay, Uruguay, and the Brazilian coast to Rio de Janeiro. After that I went to Bolivia, Peru, and Ecuador. I continued north towards the mountains, the jungle, the Panama Canal, and the topics of Central America.

On the tour, I came across sights that captivated me. Lake Atitlán in Guatemala presented a mirror of water guarded by three volcanoes. I crossed the trampoline of death in Colombia, an 80-kilometer precipice with room for only one car. In El Salvador, I felt like a rockstar when people greeted me on the street and asked for newspaper and television interviews.

Throughout the trip, my itinerary allowed me to lodge with friends, visit interesting destinations, and meet celebrities. In Culiacán, Mexico, I parked in front of Dorados Stadium to meet my idol Diego Maradona. As the soccer icon left the stadium his assistant said, “Diego, a Torino came from Argentina.” He walked to his truck, opened the door, and looked over at me. He closed the door and walked over to where I stood. I felt incredible, trembling with emotion and unable to contain my tears.

On my website – El Mundo en Torino – and on my social networks, I documented my adventures so people could learn about it and follow me. Subsequently, I met people who invited me into their homes for a meal or who offered mechanical services.

The adventure continues from Mexico to Europe

To finance my world trip in the Torino, I use donations, rest at family homes, and sell merchandise. Seventy percent of the time, people host me and give me food, which helps immensely and requires trust. Supporters from all over the world give me donations of gasoline because they identify with what I am doing.

During the trip, I fulfilled several things I wanted to do in my life including making t-shirts. A friend helped with the designs, and we made t-shirts and hats. This helps me survive day by day.

After two years, nine months, and 18 countries, I landed in Alaska to record glacial landscapes and marvel at the transition of the colors in autumn. It was breathtaking. I could scarcely believe I made it, or what my eyes saw. I felt a warm satisfaction in my chest. It marked the end of one tour, but not my last destination.

I went on to Montreal and then to the West Coast to enjoy some sun. However, the COVID-19 Pandemic interrupted my plans. When the virus hit, I returned to Argentina, leaving the car in Toronto at the house of a family who offered to store it.

When the borders began to reopen, I returned to Canada. In November 2021, I resumed my travels and began planning my new roadmap: from Mexico to Europe. I learned to travel light and make new memories each step of the way. My motto today is “Follow the journey!”