I wed my husband on Sunday, September 4, 2022, in the Jesús de la Buena Esperanza parish, the only one that welcomed us without judgment. Great joy filled me that day as a big smile spread across my face. We no longer hide. Instead, we celebrate our love as a family of two – a couple growing and walking through life together. 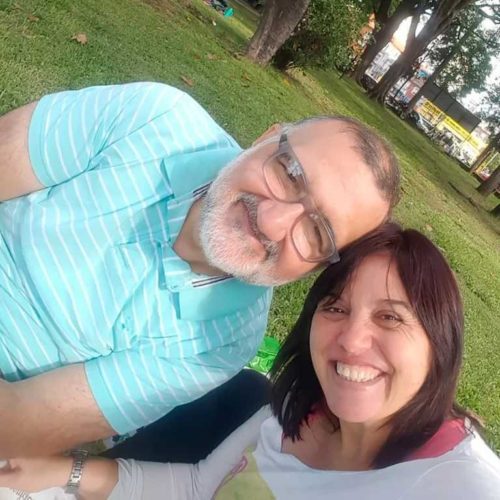 Interview Subject
Mariana Julieta Dias, 49, of Buenos Aires, was born in Los Polvorines, Argentina. She serves as a law student at the University of Buenos Aires, a professor of religious sciences and catechist, and is employed in social work. Hugo Marcelo Pisana, 55, was born in Rosario, a province of Santa Fe, Argentina, and was a priest for 30 years.
Background Information
A survey from Georgetown University shows that between 1965 and 2009, the number of nuns and priests in the U.S. fell from 180,000 to 60,000. Making certain rules more flexible, several congregations of nuns left the traditional habit to dress in everyday clothes, but little has changed in convents and seminaries according to the study. Sex education, according to some members of the Church itself, continues to be a complicated issue to address when instructing seminarians and novices.

BUENOS AIRES, Argentina — After 17 years as a nun and 30 years as a priest, my husband Hugo and I never imagined we would leave our commitments to pursue a forbidden love. We could not predict we would overcome the scandal our relationship represented in the eyes of others.

I met Hugo at 22 years old. He later confessed he felt an immediate attraction toward me. “She is a beautiful woman,” he thought, as he smiled at me. I recognized this magnetism between us and brushed it away because we both took vows of chastity.

From law student to nun, woman defies parents to join the order

I always cared about social issues and wanted to help those in need. While I considered being a nun, it scared the hell out of me. I did not fear living in a controlled environment or facing sexual abstinence for the rest of my life. Rather, I feared taking on the wrong identity, worried my calling might be a mad idea. So, I trained to be a lawyer instead. On the weekends, I served the poor through my neighborhood parish.

Read about another nun who left the parish to adopt a special needs boy.

The dream never left me and while I remained uneasy, I walked away from my law degree and gave up everything to pursue my teenage dream. My parents disliked the idea so when they went on vacation, I wrote them a letter and snuck into the novitiate. By the time they returned from Mar del Plata, it was too late to stop me.

Hugo, on the other hand, never pursued anything but being a priest. Since elementary school, he knew what he wanted. His family in Rosario supported him wholeheartedly.

Up until I joined the novitiate, I never met a nun up close. My heart soared as I left my life behind to join the nuns at Jesús María in Bella Vista. For the next 17 years, I served, studied, assisted the poor, and worked as a school tutor.

Former priest grapples with guilt for leaving the order

Jesuit priests like Hugo lived nearby at Colegio Máximo de San Miguel. The nuns often picked up the priests and brought them back to celebrate mass. Hugo and I spoke frequently. I didn’t look at Hugo any differently at the time, even though I fell head over heels in love. In the order, nuns say they have married God. I never identified with that.

If you fell in love with a person, you had to discuss it with your superior and “sublimate” the feelings by investing your love elsewhere. I threw myself into work. While I enjoyed serving the poor on the streets, the order assigned me to be the legal representative for a school. I felt like I became a civil servant and could no longer share my views on controversial issues like homosexuality. As time passed, I lost my joy and the smile disappeared from my face. I could no longer carry on the life I accepted so many years ago.

I joined the order at 21 years old and left at 37, ending my commitment to vows of chastity, poverty, and obedience. With no other life experiences, I had to learn everything from scratch. Hugo had a much harder time.

He no longer felt happy being a priest, even before he fell in love with me, but he feared leaving the church. When we met again, he had just returned home from Italy, plagued by great sorrow and many questions. Eventually, he made the decision to resign.

While the first two years of our relationship were not secret, we did not maintain a public relationship either. Hugo felt wrought with guilt – his heart split in two. It did no good to see him suffer. For lay people, the act of love is common, but in the community of the church it can be scandalous.

Shunned by the church, couple finds new careers, maintain their faith in God

As people found out Hugo and I entered a relationship, they turned their backs on us. We lived through the judgmental looks and harsh words which caused great pain. While I have many flaws, I do not judge people. I always try to remain calm and at peace.

Some criticized us because they felt betrayed and disappointed. This truth saddened us, and Hugo felt regretful for those lost relationships, but we are different people today. I returned to study law at the university, and I do social work today. Despite being an experienced Bible professor, the church forbade Hugo from teaching at Catholic universities.

He makes ends meet by teaching Latin, literature, and philosophy while also teaching at a Catholic school which dared to hire him. We left the congregation but continue to put our faith in God who is good and loves us unconditionally.

I wed my husband on Sunday, September 4, 2022, in the Jesús de la Buena Esperanza parish, the only one that welcomed us without judgment. Great joy filled me that day as a big smile spread across my face. We no longer hide. Instead, we celebrate our love as a family of two – a couple growing and walking through life together.