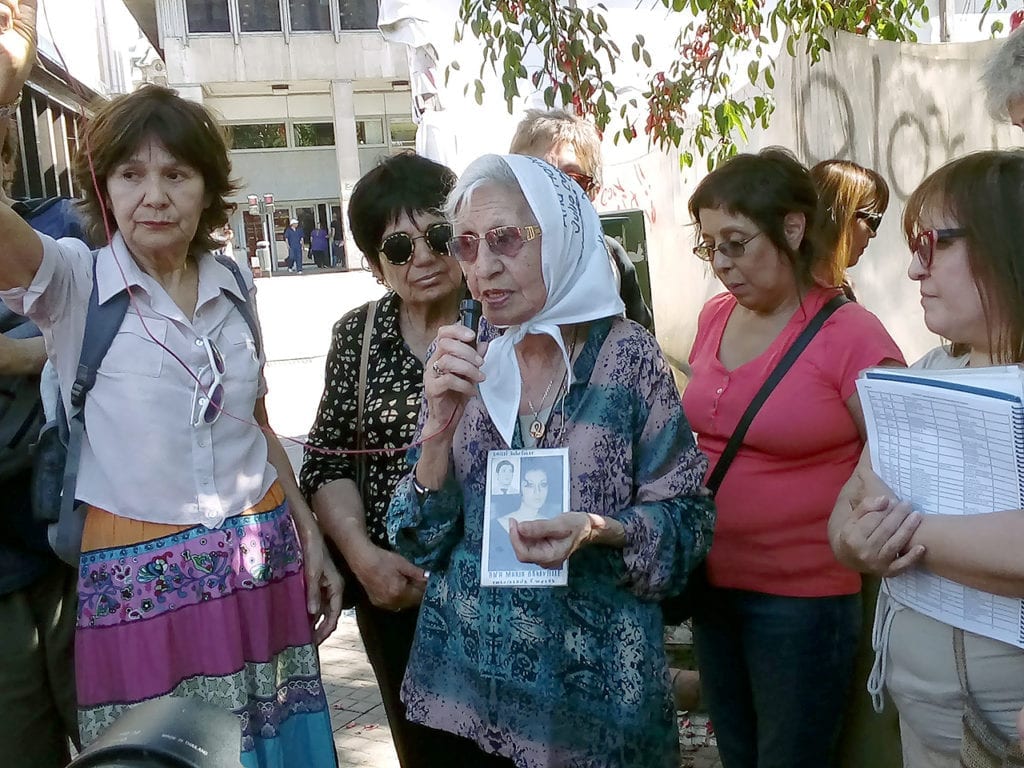 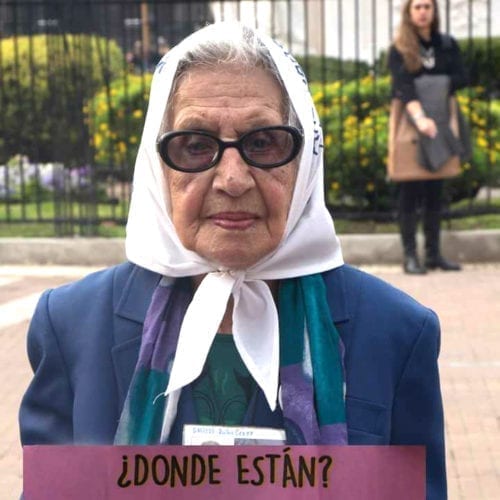 More than 40 years have passed since the day my daughter, pregnant with her first child, was stolen from me.

Four decades of searching for my daughter, my grandson or granddaughter, and their father, and nothing has turned up.

We’ve helped locate and recover more than 130 grandchildren, but not my own. I still believe, I still hope, that she is out there.

My name is Mirta Acuña de Baravalle. I am 96-years-old and a founder of the Abuelas de Plaza de Mayo.

I was a member of the association from the very beginning. We fought peacefully against the Argentine dictatorship that kidnapped and killed thousands of young people after assuming power on March 24, 1976.

My daughter, Ana María, was 28-years-old and five-months-pregnant, although she did not look it. The military kidnapped her along with her 24-year-old partner, Julio César Galizzi.

She was taken from her home in San Martín by force at dawn on Aug. 27, 1976. Soldiers stormed the house and violently dragged her into a vehicle without explanation.

I was desperate. My heart was coming out of my chest. They took her, my oldest child, away from me.

The police had no information about where she was or who took her. The prisons, detention centers, and churches knew nothing of her whereabouts.

To them, my daughter was just another victim.

Memories of my daughter

Some kids can play without a care in the world, but not my Ana. She felt a deep connection to those around her and the world in which she lived.

Before her kidnapping, she was about to graduate from university as a sociologist following a career working at the Ministry of Finance.

Her boyfriend’s family was eliminated during the dictatorship. His two brothers and their wives were also taken.

My husband couldn’t handle the anguish. Nearly two years after our daughter’s disappearance, he died of a heart attack at age 57.

I was alone. So I did the only thing I could: I went back to work.

But I never stopped searching for my eldest child.

Some time had passed before a family friend risked his life to share the news: Ana, Julio, and their baby, my grandchild, were safe in a cell.

I feared to ask anymore lest he became compromised. He risked so much just by telling me that they were alive. His trusted advisor gave him that information. He disappeared not long after.

My body was filled with hope. For the first time in a long time, I felt that I had come back to life.

I dreamed of Ana showing me her son. Before I could pick him up, I always awoke.

But her baby’s face stuck with me.

One day, after an interview regarding my missing daughter, a group of women invited me to join them to call on the government for information about their missing children and grandchildren.

Before we could talk, two soldiers approached us, machine guns in hand, and shouted, “Walk, ladies. Walk.”

We left filled with anger.

We, the Abuelas de Plaza de Mayo, organized, not in groups but pairs, around the monument of the Plaza de Mayo before the national government house every Thursday at 3:30 p.m.

Before long, we gained notoriety with our protests.

From mothers to grandmothers

Azucena Villaflor, one of our members, informed us that the Secretary of State of the United States, Cyrus Vance, was coming to visit.

That day, the Abuelas Plaza de Mayo was born.

But meeting in protest of the dictatorship was not without its challenges.

We sought refuge in confectioneries because we knew that the military wouldn’t look for us there.

We drank tea and gave each other gifts to pretend we were nothing more than housewives getting together as friends.

No dictator would stand in the way of us and our children.

A colleague and I told our stories at churches during the rule of the dictatorship. We knew the dangers involved, but we were determined to find our children, our grandchildren.

We met on street corners. But, one day, she didn’t come.

The following Saturday, many members missed our meeting. The tension was palpable. Our colleagues’ fates were understood.

Alfredo Astiz, a commander known as The Blond Angel of Death, had infiltrated into our meetings. He pretended to be the brother of a disappeared person and insisted on knowing who our relatives or friends were.

Women who participated in those meetings are all still missing today.

From research to the grandparent index

With the return of Argentine democracy in 1983, Abuelas de Plaza de Mayo had its first headquarters thanks to Amnesty International.

There, people who questioned their origins were examined to find out if they were one of the babies that we sought. We carried out thousands of DNA analyses.

The judges could no longer deny that, scientifically, a person belonged to a certain biological family.

The dictatorship has ended, democracy has returned, but my child remains missing.

I’m nearly 100 now, but I will continue to live my life for this cause.

I’m an old woman now, and I know that life is worth living.

All I want is to give him or her a hug.

Abuelas de Plaza de Mayo is an Argentine human rights organization that aims to locate and restore to their legitimate families all babies and children appropriated by the last military dictatorship (1976-1983) and create the conditions to prevent the commission of this crime against humanity and obtain the corresponding punishment for all those responsible.

It is chaired by Estela de Carlotto and has its headquarters in the city of Buenos Aires with subsidiaries in Mar del Plata, La Plata, Rosario, and Córdoba.

As of June 2019, the organization had restored the identity of 130 people.

They have been nominated five times for the Nobel Peace Prize. On Sept. 14, 2011, they received the Félix Houphouët-Boigny Prize, awarded by Unesco.

Gabriela Figueroa is a freelance journalist, lawyer, and feminist. She has collaborated with media organizations such as Vice, Socompa, Tucumán Zeta, Crisis Magazine, Tiempo Argentino, among others. She is a 2019 fellow of the Oxfam and Gabo Foundations on Journalism and Gender Inequalities.

Gabriela Figueroa is a freelance journalist, lawyer, and feminist. She has collaborated with media organizations such as Vice, Socompa, Tucumán Zeta, Crisis Magazine, Tiempo Argentino, among others. She is a 2019 fellow of the Oxfam and Gabo Foundations on Journalism and Gender Inequalities.