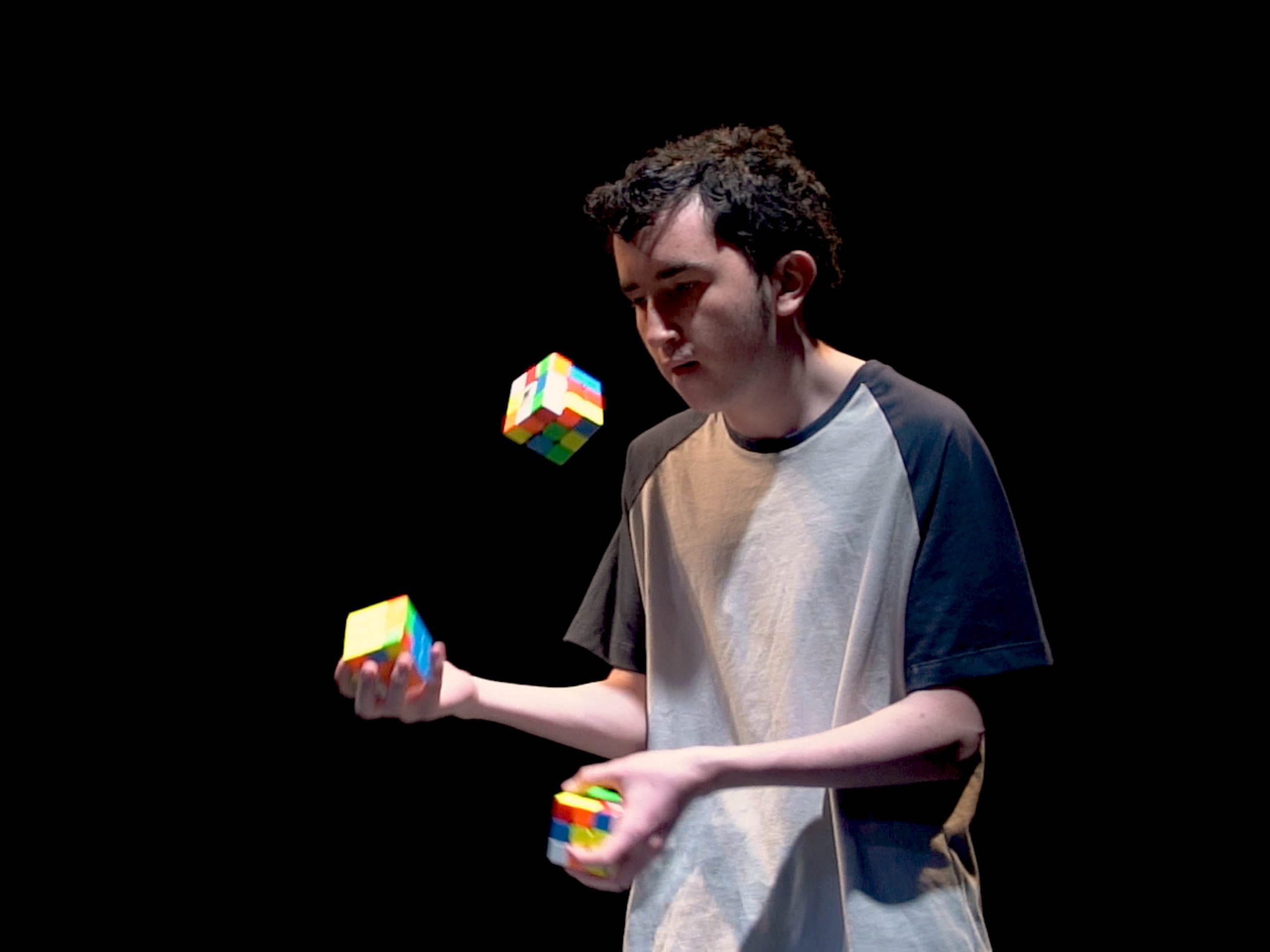 Those moments, assembling the three cubes while juggling, seemed like a dream. I felt like I was floating, and all my energy went into these fast and precise movements. I wanted my fingers and my mind to respond with maximum output. I do not think I even breathed. 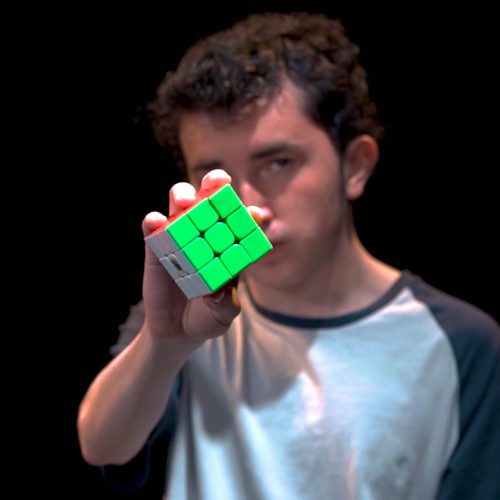 Interview Subject
Ángel Alvarado is a 19-year-old student of Pure Biology at La Salle University. He is from Bogota, Colombia. With the Rubik’s cube, he says he found a form of distraction and self-improvement. Every day he challenges himself to improve his practice. In 2022 he beat the Guinness World Record for speed of solving three Rubik’s cubes while juggling. His next goal is to set a new record for the same task but while riding a unicycle.
Background Information
Only one other person has held the record for solving three Rubik’s cubes while juggling. That was the Chinese 13-year-old Que Jianyu. Angel took the record and is now registered in the Guinness Book of World Records for assembling three Rubik’s cubes with juggling in 4 minutes and 31 seconds.

The Guiness World Records is the global authority on all things record-breaking, according to their web site. The site thoroughly explains how to set or break a record and provides step-by-step instructions to those interested in becoming part of the GWR world.

BOGOTÁ, Colombia — While I knew about the Rubik’s cube for several years, it attracted my attention when I saw an acquaintance putting one together.

On April 1, 2022 I broke the Guinness World Record for solving three Rubik’s cube while juggling in four minutes and 31.01 seconds.

After seeing an acquaintance assemble a Rubik’s cube, I began researching them. I found videos on how the cube works and how to solve one. Using tutorial videos on YouTube, I began practicing.

In two days, I put my first Rubik’s cube together – motivating me to move forward. Using beginner instructions, I started by solving a cross of any color, followed by the corners. Once I mastered the technique, I worked on solving the cube faster.

With continued research and practice, I became stronger and stronger. Then, I found out about competitions being held in Colombia. I quickly became more involved in the community.

With the goal to improve, I investigated advanced methods and dedicated myself to learning the 70 algorithms required to solve all possible combinations. Assembling the cube requires one to know, by heart, all the options that exist.

Depending on the figures that appear, the movements follow. In the first layer, there are 50 cases. In the second layer, there are 20 more. When you learn all the cases, you practice speed, moving as fast as possible.

In 2020, like everyone else, I found myself in quarantine due to the COVID-19 Pandemic. I started practicing more often and the results became noticeable. I split my time between working on the Rubik’s cube and studying biology at the Universidad de la Salle.

One day in 2021, I saw a video of Que Jianyu who held the Guinness Record for assembling three Rubik’s cubes while juggling, and it caught my attention. I decided to follow his footsteps. I learned to juggle and, in that moment, I thought, “If Jianyu could do it at 13 years old, I can do it too.” It became a matter of practice.

Submitting his first video to the Guinness World Records

I began juggling with balls, which feels peculiar. If you manage to juggle for more than 30 seconds straight, you can advance because you have mastered the technique. I integrated one Rubik’s cube with two other balls.

Once I could solve one cube, I began juggling two cubes and solved them at the same time. Finally, I juggled all three cubes. It took me 11 minutes to solve them while juggling and just five months had passed.

Sometimes, I only solved the cubes once in a two-hour practice. It would have been easy to lose motivation, but I focused on the small advances I made, even when I did not achieve the ultimate goal. It pushed me to continue. I knew if I went step-by-step, I could achieve what I set out to do, even if it proved very difficult.

Once I assembled all three cubes while juggling, I began working on my times. To beat the Guinness Record, I dedicated all my practice to this effort. I started at 11 minutes and eight seconds, but after a few days, went down to seven minutes. Almost immediately, I solved the cubes in five minutes. With my goal so close, I became more enthusiastic about practicing.

In one practice, I put together three cubes in less than five minutes while juggling, and I knew I could beat Jianyu. I decided to start recording my rehearsals. When I made a good time again, I took the video and registered it on the page for the Guinness World Records.

Sometime later, they accepted my request, but first I had to send a new video using the conditions they required. I had to have an audience and use specific camera positions. A friend who organizes Rubik’s cube contests jumped in to help me.

We got space in a shopping center, surrounded by people, complying with all the requirements of the Guinness World Records organization. I sent the video we recorded and felt full of excitement.

Frustration set in as it took them nine months to respond. I became nervous and discouraged. Sometimes I believed the good news would come at any moment; and other times I thought I must be harboring false hope. Then, one day, the mail arrived. I opened it to see a note validating my video.

Since it took so long for the Guinness World Records to respond, I already improved my own time. In practice, I broke my own record, so I contacted them again and reported my new speed. This time, I did not have to jump through so many hoops to prove it. I could focus on practice.

Guinness World Records hired a company in Colombia to make the recording. On April 1, 2022, I broke the record with a time of 4 minutes and 31.01 seconds. The video they created has become the official, registered version, and remains on the company’s web site.

The clock stops, he breaks the record

April 1st proved to be the most exciting day for me. On one hand, I beat my record, but on the other, I showed people that with dedication, you can accomplish what you set out to do. I arrived at the location and Guinness World Records assigned me a space.

I focused on the idea that everything would go well. Many more people came to the event than I anticipated. It made me nervous at first, but I reassured myself. As I waited for the moment to begin, I saw people watching with anticipation. I felt moved and all the hours of work I put in became worth it.

When the time came to make my presentation, I took a deep breath and focused completely on what I needed to do. I forgot that the people were watching me and that I was surrounded by cameras. I let go of the knowledge that the world was waiting to see me break the record and I focused on my time.

Those moments, assembling three cubes while juggling, seemed like a dream. I felt like I was floating, and all my energy went into the fast and precise movements. Wanting my fingers and mind to respond with maximum output, I do not think I even breathed.

When I finished, the clock stopped but my body remained full of tension. I looked at the stopwatch which read four minutes and 31 seconds; and I saw the smiling faces of everyone around me. Not only did I surpass the record, but I also surpassed my own expectations.

I knew in that moment, the five hours of daily practice paid off. I felt so proud to achieve my goal. People applauded and excitement filled the venue, especially amongst other young people like me who feel passionate about the Rubik’s cube.

Just a month after making the video, Guinness World Records validated it and I remain the record holder for the best time in the world. Next, I want to set a new record: juggling the cubes while mounted on a unicycle. I taught myself how to ride the bike and am just starting to combine all three skills. I anticipate it will take me a year to solve the cubes this way. It excites me to know no one else in the world has done this.

I also want to participate in professional competitions around the world, while continually improving my times. I know I face competitors. There are about 17 people in the world capable of juggling and assembling cubes. Any of them, with work, could beat my record. At the same time, I could also beat my record, because I practice daily.

Since winning the world record in Colombia, three times as many people show up to the Rubik’s cube events. The competitors continually outperform one another. It seems cool to me to watch the community grow. You don’t need to be brilliant to solve a Rubik’s cube. You just need to be persistent.

Read about more visionaries doing amazing things around the globe. 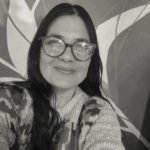 Ruby Hernández is a social communicator and journalist, interested in stories that move readers' senses and in characters that leave their mark on society. She has extensive experience in the written press, mainly on Judicial Order issues.