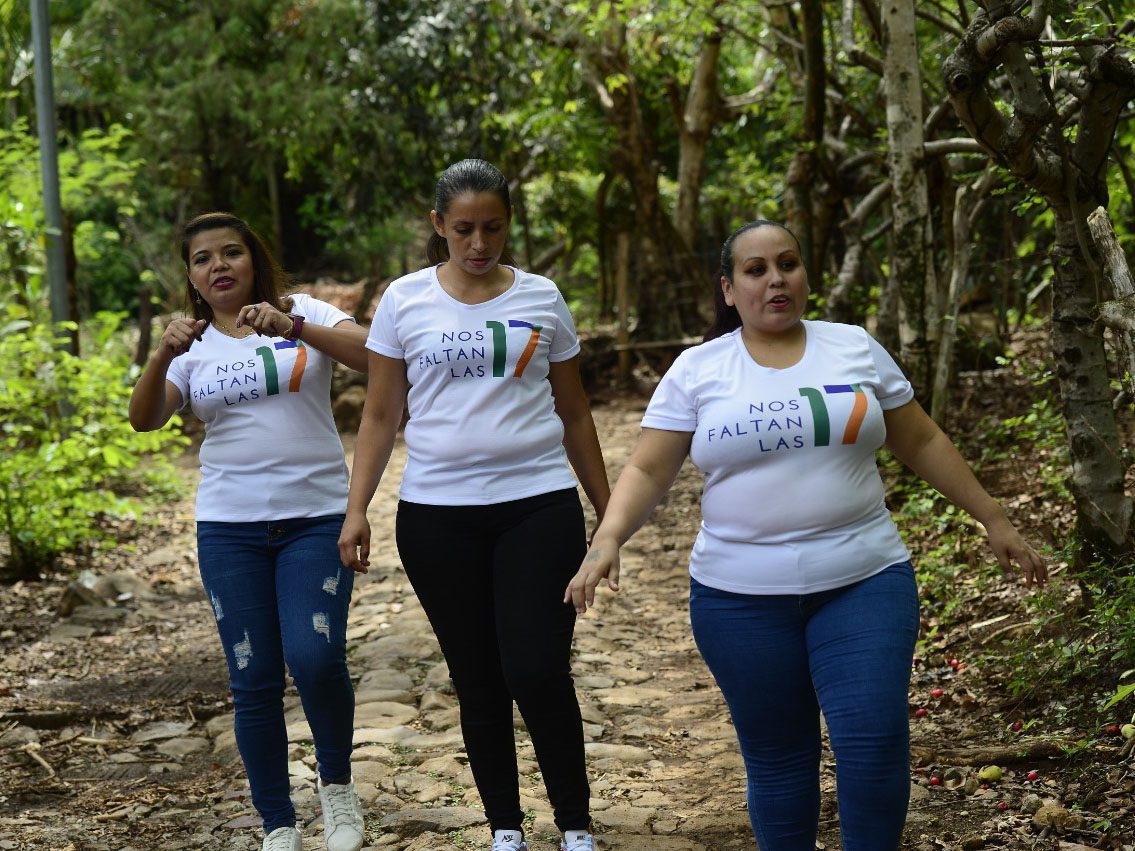 Cinthia Marcela Rodríguez and her friends | Photo Courtesy of Cortesía

[After losing my son], the police and doctors accused me of having an abortion. All I could think of was my son. I could not understand why they accused me of aborting him. I did nothing wrong. 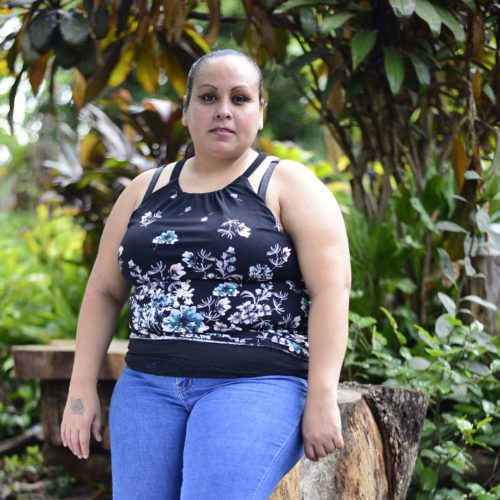 Interview Subject
Cinthia Marcela Rodríguez is one of many women who has been accused and imprisoned for abortion in El Salvador. She had an out-of-hospital emergency on June 4, 2008. While in the hospital, the doctors accused her of having aborted her baby. After being prosecuted, she was sentenced to 30 years in prison for said crime. However, due to a commutation of her sentence, she was released in 2019. She was detained for 10 years in a prison in the country.
Background Information
El Salvador is one of the countries with the strictest anti-abortion laws in the world. It is penalized, in all its forms, with up to 30 years in prison. In the last 20 years, more than 181 women have been criminally prosecuted after suffering obstetric emergencies.
Currently, according to social organizations, there are seven women who are imprisoned with final sentences, while one is in prison without a final ruling and another four face their judicial processes in freedom.

*Trigger Warning: this story contains some graphic content and be difficult to read.

El Salvador — On June 4, 2008, seven and a half months into my pregnancy, I gave birth to my son alone in my home. With the umbilical cord wrapped around his neck, he appeared purple.

A neighbor helped me call an ambulance, but the police arrived instead. They accused me of having an abortion. I was arrested and imprisoned for 10 years.

Mom experiences the traumatic birth of her son

That June day in 2008 seemed like any other. I went about my usual routine. I worked at a factory during the day and studied at night. I left school at 9:00 p.m. and arrived home to an empty house. My mom and family had gone on a trip to Guatemala. By 10:00 p.m., I was resting comfortably.

A few hours later, I felt a mild pain in my belly, but being seven and a half months pregnant, I did not consider that I might be in labor. I ignored the pain and after a few minutes, the discomfort passed. I fell back asleep.

Around 2:00 a.m. I awoke suddenly. A heavy rainstorm lashed outside. This time, the pain felt intense. I got up and it felt like my child moved. Holding my stomach, I decided to go to my neighbor for help.

Gripped with worry, I went down the steps, but I did not make it. Right there, I felt my baby coming out of me. Unsure what to do, fear and anguish took over.

My son came out purple with an umbilical cord wrapped around his neck. I hugged him tightly and ran to my neighbor’s house for help. She told me to go home and call an ambulance. As I waited, I passed out.

The police found me in my home. Rather than sending an ambulance, a patrol arrived. I awoke with my foot cuffed to a stretcher. “Why am I like this,” I wondered, “What happened?”

The police said the doctors accused me of having an abortion.

All I could think of was my son. I could not understand why they accused me of aborting him when I did nothing wrong. I became distressed, as no one offered answers to my questions. Instead, they spoke in way that felt incriminating to me.

At the medical center, instead of properly treating me, they only wanted to talk about the “abortion.” My life changed forever.

I spent three days in the medical center before being taken to a cell at the police station. I spent two more days there in deplorable conditions. The accusations continued and the police informed me of my formal arrest. They planned to pursue the abortion case.

One month after my preliminary hearing, I received a sentence of 30 years in prison. It felt like one of the most difficult and cruel days since my arrest. It tortured me to think about the time I would spend in jail. I began to constantly wonder, “When am I going to get out of here?”

They transferred me to Ilopango, a women’s prison outside San Salvador. I quickly encountered mistreatment by the people at the prison, including inmates, because they consider abortion a serious crime in El Salvador. They beat me and tortured me to the point the authorities placed me in isolation for three months.

I lived in a small, overcrowded cell and slept in a bunk bed. There were so many people, the bunks could not accommodate everyone. We had to create supports to build another sleeping space. We stuffed in a mattress and nicknamed it “the cave.”

Due to limited resources, my mother only came to see me occasionally. We had no money for a lawyer and, as a result, I experienced a rather unusual judicial process. I was supposed to have a preliminary hearing after six months, but authorities told me there were too many gaps in my case.

Over a year passed between my arrest and my hearing. A lawyer assigned to my case came into the courtroom and asked for me. He did not even know who I was.

The lawyer went in a separate room with the judges and returned with a piece of paper in his hand. He told me to sign the paper and that the hearing had concluded. I knew nothing about my rights, so I asked him why he had not visited me in advance. He said due diligence had been completed in my absence.

Throughout my criminal proceedings, I had four different public attorneys and only met them minutes before the hearings began. Each of them seemed unaware of my case.

The hardest part about prison, aside from the constant mistreatment, included missing out on my son’s and father’s funerals. I never saw them again after my arrest.

Woman imprisoned for abortion gets help from the outside

Coping with the death of my child while being accused of abortion caused me deep pain. Slowly, and with great effort, I began to heal. To this day, I continue my sessions with a psychologist. It helps to talk about what happened to me; it allows me to unload my burden.

As time went on, in 2012, I met with the Agrupación Ciudadana y a la Colectiva (the Citizens Group and the Collective), an entity which fights for women’s rights in El Salvador. They said they could help me with my case, though I did not believe them.

Then, between 2013 and 2014, for the first time, a woman imprisoned for abortion received her release. A rush of hope filled me. With relief, I told myself, “Yes, it is true! They are going to help me; I will finally be able to return home to my family.”

It felt exciting to know people were fighting for me and with renewed hope, I decided to study in prison. I finished high school, began working in a bakery, and took part in psychosocial workshops through the reintegration programs. The mistreatment and discrimination I experienced at the hands of other inmates and guards never stopped. Yet, once they saw I had support from an outside organization, the treatment improved, and the accusations decreased.

Finally, she is released from prison

My strength continued to grow knowing people were working on my behalf. If they did their part, so would I, because I wanted to be free. In early 2019, I received news of my upcoming release. They told me one week before the big day. I thought, “Finally, after being detained for more than 10 years, I can return home to my family.” I felt so excited I could not eat.

On March 7, 2019, after a long-drawn-out process full of challenges, the court granted me my freedom. That day, I expected to see only my mother outside the prison walls. Instead, the media and a great many people awaited me. Along with my mom, I saw my brothers, my aunt, and all the people from the organizations that supported me.

A beautiful emotion arose inside, like an immense joy, but I also felt sadness for having been locked up for so long. I had to start my life all over again. As I left the prison, I considered the other women still inside, accused of the same crime. I wanted to fight for them.

Though I rebuilt my life and felt happy, nothing ever went back to normal. I had hopes of finding a good job, but because my freedom came through a commutation of my sentence, my paperwork stains my life, making it difficult to obtain employment.

Currently, I work in a clothing store and operate a small business. I want to be a professional and enjoy a career with greater opportunities. The truth is my life stagnated because I went to prison for 10 years. I often wish I had finished my degree and I question everything.

Discriminated by the community, she still builds her family

Even going home and living back in my neighborhood proved difficult and complicated. People make negative comments. Their judgement leaves me depressed, but I remind myself I am not guilty of their accusations. I try to ignore them. “They can think what they want,” I tell myself, “I lived through it. I suffered, not them.”

As for love, I found it. I built a family with my life partner. When I became pregnant again, I worried the same thing would happen to me as before. Consumed by fear, I wondered, “What if I go to jail again because of an emergency? What will I do?”

Thank God nothing went wrong. The organizations that helped me out of prison, ensured I experienced a good pregnancy. They took me to the clinic for check-ups. When I gave birth to my daughter, I felt pure joy. I may not live a life full of luxury, but I want to give her everything she needs to develop her full potential.

The fight against wrongful imprisonment for abortion rages on

Abortion in El Salvador proves to be a complicated issue. It remains illegal. If a woman has an obstetric or out-of-hospital emergency, she can be detained for abortion. Many women have been wrongly imprisoned for this crime.

I want the authorities to investigate better, to find out how these emergencies happened. They need to analyze each person’s situation to determine what happened and why. This must occur before punishing or blaming the woman.

Anyone can go through a situation like this. What I want to say to the women of El Salvador and those around the world is this: if, at any time, you find yourself in a situation like the one I had to live through, do not hesitate. Seek help.

Many organizations exist today to support this cause and women like us. Still today, when a new case occurs and a woman arrives at the hospital in El Salvador, the first thing the authorities do is report a crime. They do this even before treating her properly. We must not give up; and we must not lose hope. 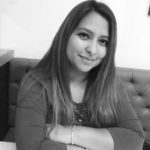 Cecilia Fuentes is a Salvadoran journalist who has worked in various print and digital media there for more than three years. She is always looking for stories to tell the world and to give a voice to those who need it most.