Hospital bills, fraudulent doctors, poverty and COVID-19 all contribute to a rise of impoverished teen mothers with nowhere to turn. 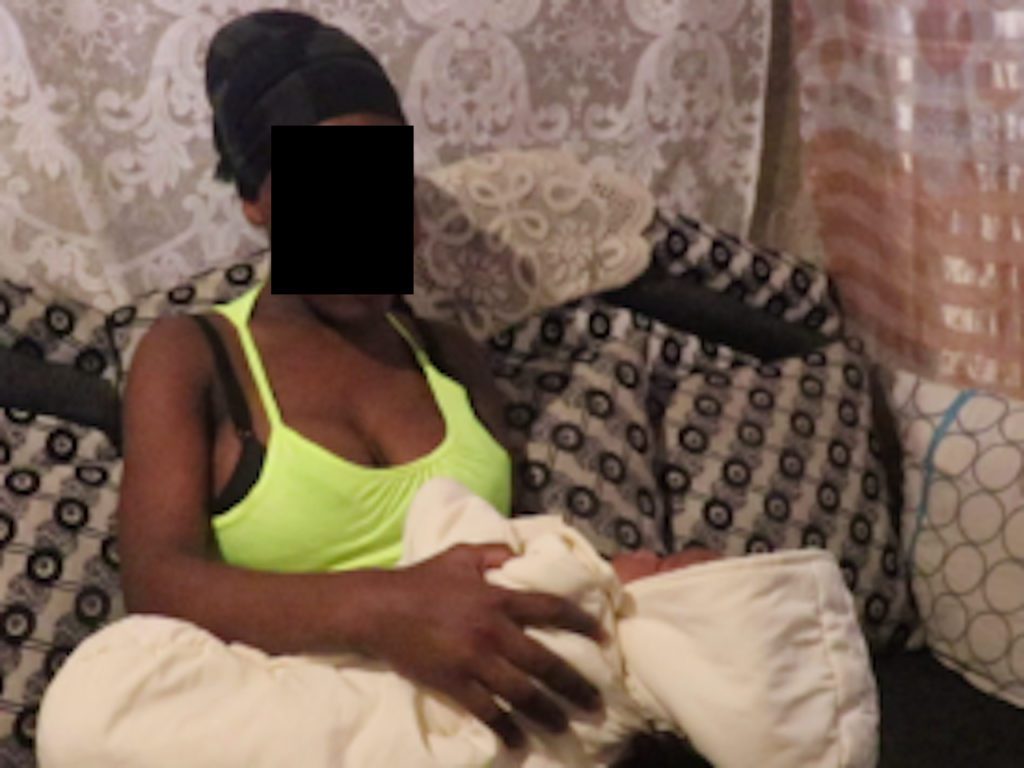 Debra Daisy with her baby at her sister's house. She now lives with her sister after her father kicked her out of their house for being pregnant. | David Bett 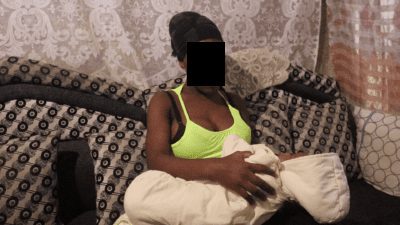 Interview Subject
Debra Daisy,17, is a high school student who got pregnant and had to drop out of school. She was exposed to the sex trade at 13-years-old by her friends.

Her face has been blacked out to protect her identity.

A resident of the poverty-stricken Mathare slum, when COVID hit and schools closed, she turned to the sex trade to make money.

Her eventual pregnancy resulted in her father kicking her out of their house. She and her infant survive with the support of her older sister.
Background
According to the Global Childhood Report, Kenya -2019, one in every five girls from 15 to 19 years old in Kenya were pregnant or gave birth between 2014 and 2019.

Teen pregnancy rose sharply in 2020 during the country’s COVID-19 lockdown.

Socio-economic issues play a major role in teenage pregnancies in Kenya. In 2019, the government brought teen mothers back to school in an effort to fight poverty and eradicate the stigma that comes with early pregnancy.

Two-thirds of teen mothers in Kenya come from poor backgrounds either in villages or ghettos in urban areas.

Unfortunately, over 53 percent of women in Kenya do not receive postnatal care.

NAIROBI, Kenya –Life was not easy for me growing up. My parents were jobless and they had no official papers to obtain employment. What little money they earned covered all of the household needs and our school fees.

We lived in a slum because it was all we could afford. During the pandemic, lockdowns and school closures kept us idle and destitute.

My friends introduced me to the sex trade. Their male “friends” would give them money and other goodies for sex.

At 13 years old, I joined them, but it wasn’t until I was 16 years old that my activities escalated. In 2020, when our schools shut down due to the pandemic, I began engaging in sex every day, in exchange for pennies.

The money I made having sex was not enough to sustain anyone, so I went back day after day. I used what I earned to buy clothing and shoes. Little did I know I was chasing a pregnancy.

I am now 17 years old (still a minor according to Kenyan law) and I have an infant. I watch my baby all day and rely on my sister for everything. This is a life lesson that cannot be undone.

Kicked out for being pregnant, left sick and starving

At 16 years old, my stomach began to bulge. One morning I dashed away to throw up and my mom followed me. She knew something was wrong, but it had taken her some time to figure it out.

She asked me the name of the father of my unborn baby. I was stunned. I told her what happened, and she insisted I prepare a better explanation for my father. The anxiety swept through me, wondering what would happen when he found out.

The next day, my dad said he heard something about me, and he expected answers. He was leaving for work, and I thought he would wait to grill me when he returned home that evening.

In less than ten minutes, he returned and insisted I leave the house immediately. My father told me to go to my “husband’s” house and said this was my choice because I had gotten pregnant. I went to live with my boyfriend.

Like any other slum dweller, he struggled with poverty too. He went out each day to look for jobs to buy food and basic amenities. In most cases, we survived on one meal a day. Some days we ate nothing.

Being pregnant and missing meals, let alone lacking a balanced diet, made me weak. I started feeling sick. With nowhere to run, I sought help from my older sister who lived by herself. She immediately took me in.

Becoming a mother and learning to survive

During the early stages of the pregnancy, my friends suggested I abort the child. I did not want to; I felt strongly about the life I was carrying.

It wasn’t the child’s fault that I engaged in sex so early, so I kept the pregnancy despite the challenges I faced.

Sometimes during my pregnancy, I would wake up afraid to speak to anyone but my sister. I felt unsafe. She did everything she could to revive me. By the time I arrived at her house, I was grossly undernourished. She hustled every day to buy not just food, but a balanced diet for me.

I worried I was a burden to my sister. She cared for me despite the fact that I was a disgrace to the family. She took me to the clinic, guided me on pelvic exercises, and prepared me for delivery.

I thank God that the birth of my child was normal because I’m not sure we could have handled any more issues. Were it not for the free maternal care we received at the public hospital, I would be desperately trying to pay the bills now.

Sadly, very young girls becoming pregnant is normal here in the slums. So many of us are mothers already. Many of us die trying to terminate pregnancies, as we are preyed upon by fake doctors.

As for my friends, some of them are back in school while others dropped out and live in the ghetto. School is not a priority here. We face pressing issues that require immediate attention. Poverty pushes us to the extremes, and no one teaches us how to protect ourselves.

I still want to go back to school and pursue my dreams. My father wants nothing to do with me, so I will have to find a way to pay my own school fees.

I hope my parents forgive me one day.