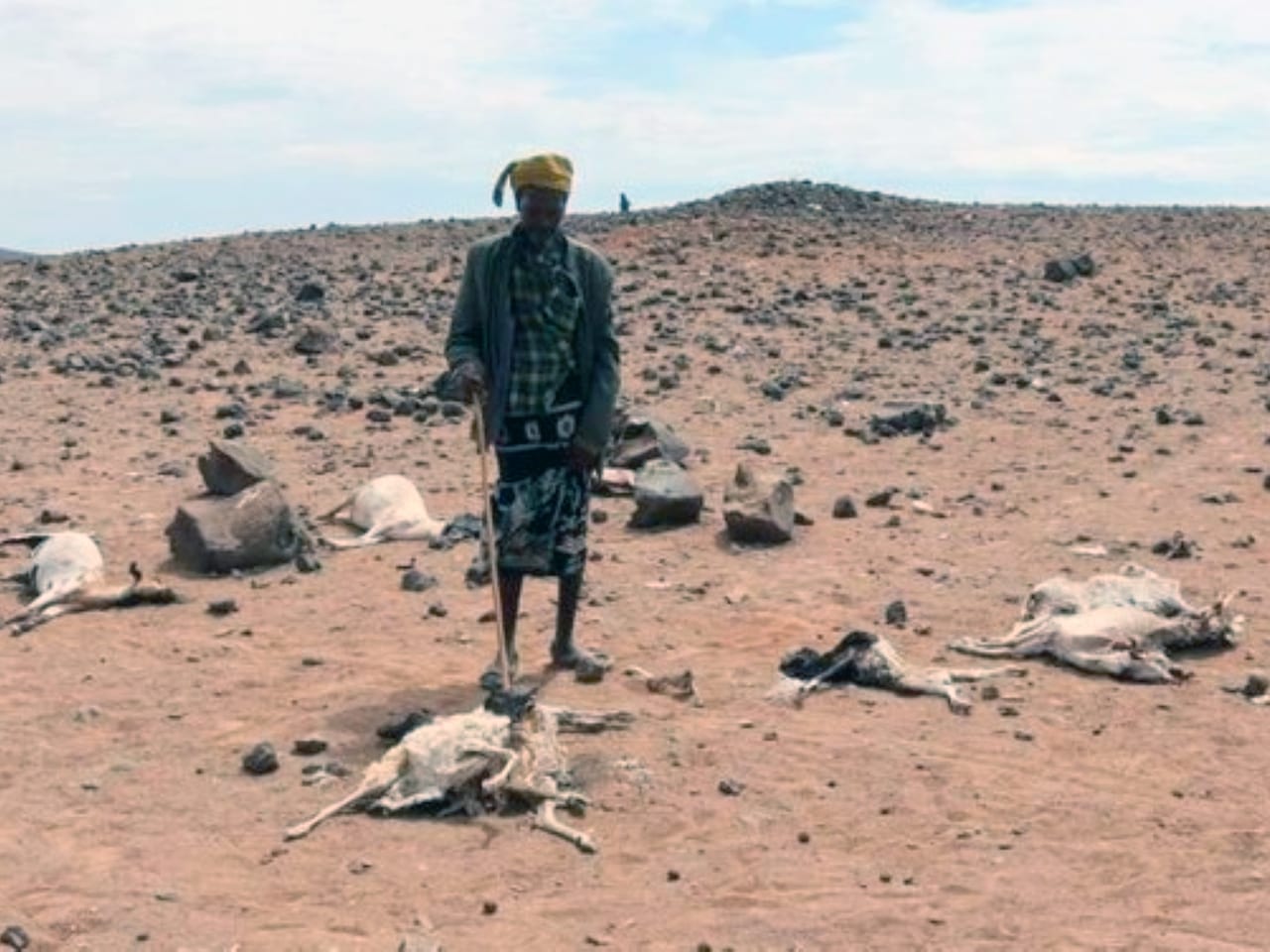 Lack of food and water dehumanizes and makes one feel worthless. The pangs of hunger are terrible and render one hopeless.

First-person source
Kevin Lomenen is a student from Turkana community, one of the perennially food insecure communities in Kenya. He is pursuing his diploma in journalism at Multimedia University of Kenya. Having witnessed and experienced food insecurity, he is passionate to turnaround his fortunes through education.
Background
Perennial food insecurity in Kenya’s arid and semi-arid lands is a significant threat to many residents living in these areas.
Drought and short rains worsen the situation and put many lives at risk of severe starvation.

A report by Kenya Food Security Steering Group reports that 1.4 million people from ASAL counties face severe food shortages this year.
Links
Millions of Kenyans go hungry every day. Why, and what can be done

TURKANA, Kenya — Growing up, I witnessed families struggle to secure food every time a drought or famine struck our underprivileged community.

Children born to parents in communities living in arid and semi-arid areas of Kenya are at risk of starvation, hunger, and possibly severe food insecurity.

I come from Turkana, one of Kenya’s pastoral communities, and I am a proud member of this community. I owe respect to all pastoralists in Kenya who have been neglected and marginalized for too long.

My parents have been trying their best to fight acute food insecurity year after year.

The arid and semi-arid conditions, in most instances, do not favor us. During drought and famine, we suffer a lot. Access to water, food, and other basic needs are always challenges.

Lack of food and water dehumanizes and makes people feel worthless. The pangs of hunger are terrible and render us hopeless.

Food is a basic need, and lack of it can snuff out a life.

When I was 10 years old, I wondered if the lack of food in my community would ever end.

At that age, I did not understand why we were the only ones struggling to feed ourselves. However, the desperation that I saw shocked me to the core.

People were losing weight, and children were malnourished. They lacked energy but hoped to live.

Adults could put up with hunger for some time, but for children, it was hard. Regrettably, the parents did not have the means to solve the situation. The only hope was for the government to step in and save people from severe starvation and thirst.

However, as years went by, I better understood that famine was permanent. Cattle, the primary source of livelihood in the region, were also losing energy and would die due to a lack of pasture and water.

My community and its animals are always vulnerable to calamities like famine.

During famines, our struggle is to survive. We look for something to sustain us as we try to figure out how to get food and water for ourselves and our domestic animals.

My people have suffered losses due to droughts, made worse by climate change. They rear cattle, which provide milk and meat. They can also sell cattle, and that generates income for the nomads.

In the worst-case scenarios, animals die, putting nomads at risk of food insecurity. When the animals die, it means there will be no milk and meat for my community to manage hunger.

When the dry spell lasts for a long period, the ugly sight of the carcasses of goats, cows, camels, donkeys, and dogs are everywhere.

They are scary images, but I am used to seeing them. These visuals affect the mind, but we try as much as possible to be hopeful amid devastating famine.

Sadly, the carcasses of these animals often become human food. Since there is nothing else to eat, children and adults grab carcasses as their lives depend on them.

Could count their ribs

We faced cruel starvation in 2019, the worst year since I became an adult, with a wave of famine that hit the most vulnerable in the Turkana community.

The victims were emaciated, and I could count their ribs. It was unimaginable seeing people helpless to that extent.

Arid and semi-arid counties such as Wajir, Tana River, Marsabit, Garissa, Mandera, and Isiolo are the most affected every year the food security crisis hits Kenya. A person who hails from these areas and comes from an underprivileged family is unlikely to escape.

In February 2021, the Kenya Food Security Steering Group (KFSSG) announced that about 1.4 million Kenyans in arid and semi-arid regions are at a risk of facing an acute food security crisis this year. This number makes up 10 per cent of Kenya’s population in ASAL counties.

I hope someone can contain the crisis before the situation worsens.

Education a way out

I consider myself lucky because we are pulling through the harshest of conditions in ASAL areas.

My people have begun to realize the need to take their children to school. They are considering education as a means to get out of this perennial problem.

It gives me relief to see children in Kenya’s marginalized pastoral communities pursue education. I have seen children determined to change the situation through education.

During my primary school and secondary school days, I believed that my schoolmates’ situation would change. I was not the most disadvantaged child, but seeing my schoolmates stay in class self-assuredly, sometimes without adequate food, was a sign of hope.

The grit that children in my community show while pursuing their studies amid biting hunger was covetous.

Access to education has allowed us to restructure our lives and find a way of overcoming food insecurity.

Parents are becoming enlightened and take their children to school to pursue dreams that would untie them from perennial household food insecurity and other harsh economic conditions.

I am focused on my studies, and I am determined to succeed. Education is the only tool I have to better my life and fight for my community.

My education is enlightening me, and I have realized that the food security problem is not permanent.

When I came to the capital, Nairobi, for my higher education, I realized that it is possible to change my situation and that of my community.

Upon completing my studies, I am hopeful that I will secure a job that will help me meet my basic needs without struggle.

Once I graduate and secure employment, I will commit my earnings to fight food insecurity at a family level. This promise implies that if many children from disadvantaged communities or families access education, they would be in an excellent position to fight poverty which in most cases contributes to food insecurity to Kenyans living in arid regions.

However, school enrollment is appallingly low in arid and semi-arid lands. A worrisome trend has caught the attention of education officials, and, fortunately, they are moving with speed to demand that parents take their children to school.

Some parents keep their children at home to look after livestock.

The administrators in ASAL regions are urging parents to take children to school; failure to do so would lead to an arrest. This move will ultimately help ASAL communities solve recurrent food insecurity.

Hunger and malnutrition have affected nomadic communities for many years. Without food in school, no child could see the need to seek education.

School enrollment has been inadequate in arid and semi-arid lands due to hunger. Children felt that it was not necessary to be at school if there was no food.

However, the situation had slowly changed since the 1980s, when the board introduced school feeding programs in nomadic communities to spur enrollment.

I have benefited significantly from the government’s school feeding program. The United Nations World Food Programme (WFP) and the Ministry of Education have worked collaboratively to feed school-going children since the 1980s.

However, in 2018 the Kenyan government took over school meals from WFP.

It is this program that persuaded many children to go to school. As nomadic people, they were not interested in education at all. When food was made available in schools, it became a haven for many who previously could go hungry for many days.

I would admit that a majority of my schoolmates came to school for food. School meals were bait, and if the government dares to do away with this feeding program, many children will drop out.

I appreciate this program because it has helped many of my peers reach higher education levels. They could sometimes collect food from school and take it home for their relatives.

This effort has seen some parents and guardians prefer education over keeping traditional livestock with low yields.

Apart from taking children to school, we are gradually shifting attention to crop farming. Even though we do not receive adequate rainfall, the little precipitation we get can go to farming.

My people are growing drought-resistant crops like sorghum. They can become food secure if they can make a meaningful harvest every season.

Even though opportunities are limited in our region, we can become engineers, teachers, doctors, journalists, and successful businesspeople. These options are possible if they prioritize education over livestock keeping.

The ASAL areas are not agriculturally productive like other fertile areas in Kenya, but they can create opportunities if the government channels resources.

The Turkana county government and other ASAL counties receive considerably high revenue allocations to address problems such as food insecurity. If they properly utilize these resources, there is a bright future for the hunger-stricken communities.

I will be a change agent in my community.

My focus will be to encourage young people to pursue education and seek opportunities outside the ASAL regions. 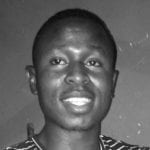 Obwin Owen Benjamin, a Kenyan author, and journalist with a background in electronic and digital media. He has experience in research and fact-checking, news editing, and reporting.