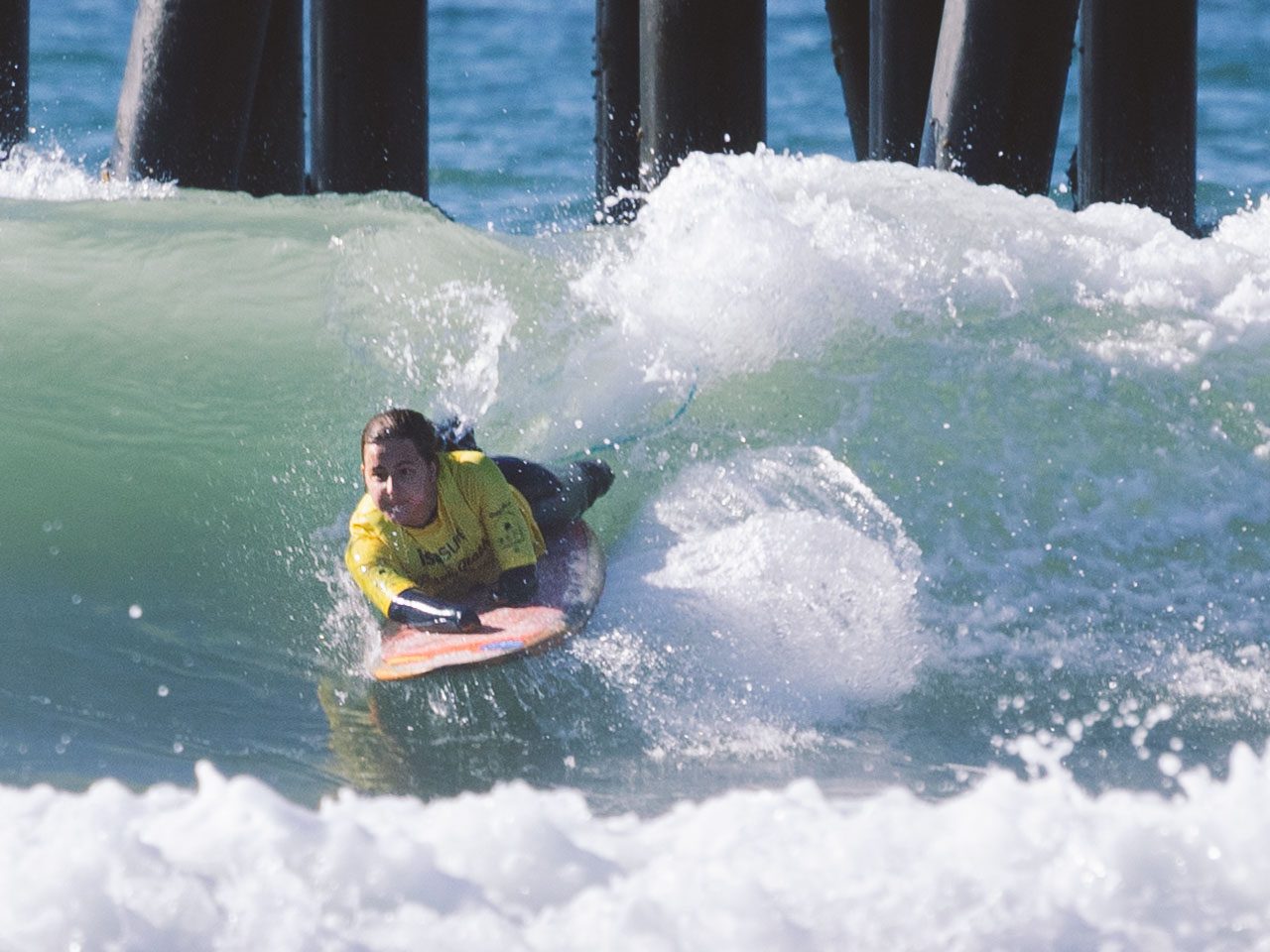 The meningitis caused sepsis which led to necrosis (death of the body tissue). Wounds began to appear on my body that looked like burns. I was transferred to another hospital with a burn unit. Then the worst news came. They had to do an amputation. 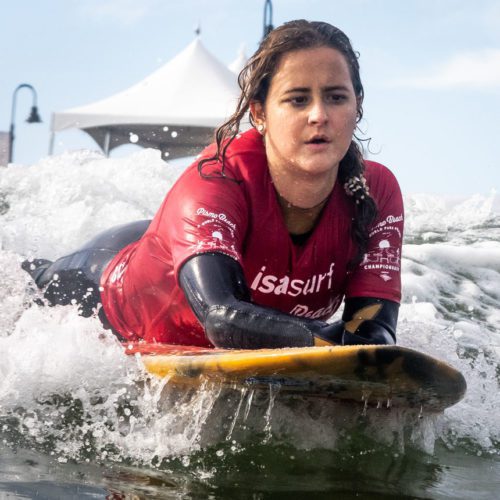 Interview Subject
Sarah Almagro Vallejo, 22, is a law student in her fourth year. She lost all her limbs in 2018 as the result of complications from meningococcal meningitis. Her parents raised funds for prosthetics which have allowed Sarah to continue the active, athletic life she had before the amputations. She has since become the Spanish national champion in adapted surfing and the world runner-up.

When Sarah’s parents learned that prostheses provided by the government are outdated, they began fighting not only for Sarah but all people who need prostheses. The ones Sarah wears for hands cost 80 thousand euros each (about 81,500 USD); and her feet cost 200,000 euros (almost 204,000 USD). Because she will have to change her prosthetics periodically throughout her life, Sarah will likely need to invest 2.5 million euros over time.

Given this, her parents created the foundation Somos Tu Ola, to bring awareness and raise money for their daughter. Similarly, they have fought for the authorities to improve the quality of the prosthetic catalog and add the meningitis vaccine to the national calendar. Sarah aspires to participate in the 2028 Paralympic Games in Los Angeles, California.
Background Information
Meningitis causes inflammation of the membranes that cover the brain and spinal cord. Meningitis can be of viral origin, which is usually benign and has mild consequences, or of bacterial origin, which is the most dangerous. There are three types of bacteria that cause meningitis: Haemophilus Influenzae B (HiB), pneumococcus, and meningococcus. Sepsis is a variety of bacterial diseases where the infection travels through the bloodstream throughout the body.

In Spain, the average hospitalization rate for meningococcal infection was 1.64 hospitalizations per 100,000 inhabitants between 1997 to 2018. About 46 percent included children under 5 years of age. The in-hospital case-fatality rate was 7.45 percent. According to Our World Data, in 2019 the African region had the highest rates with 76,752 deaths. In comparison, Spain had 11 deaths, the U.S. had 124, and some countries had zero.

MALAGA, SPAIN- After contracting a bacterial virus that nearly killed me, at 18 years old, I underwent an amputation of my hands and feet. I thought I would be useless for the rest of my life. Yet, with my parents’ encouragement and the use of prosthetics, I became the Spanish national adapted surfing champion and the world runner-up.

From a headache to Intensive Care overnight

On a summer day in July 2018, a severe headache overcame me. My mom gave me ibuprofen and acetaminophen, but my body rejected the medicine, and I threw up. At the doctor’s office they diagnosed me with gastroenteritis (A condition characterized by irritation and inflammation of the stomach and intestines). They sent me home.

Still sick the next day, my temperature reached 41 degrees (105.8 Fahrenheit). While my mom never ran her children to the hospital for a fever, she did that day. Thank God, because if we waited three more hours, I could have died.

I entered the emergency room hunched over. The pain made it nearly impossible to walk. The doctors gave me a wheelchair and put me in the waiting line. With an emergency room full of people, the minutes passed very slowly. “I can’t take it anymore,” I told my mom.

“Scream,” she answered. I looked at her in disbelief. “You will lose nothing,” she insisted, “Yell!” I screamed out in pain so loudly, the medical staff ran right over. They asked me to shut up, so I screamed more. It got their attention.

After a series of tests, they insisted I had gastroenteritis, but this time, they kept me for observation. The pain continued to worsen and while they administered medication to relieve my discomfort, I passed out and lost consciousness. Within a half hour, they admitted me to the intensive care unit.

Meningitis leads to an induced coma

In ICU, the doctors put me in a coma. They told my parents I had meningococcal meningitis [a bacteria-based infection that causes inflammation of the brain and spinal cord, and has a high mortality rate]. They said I would not live more than 24 hours, but my parents refused to give up hope. Dad told me to fight, and mom said, “When you wake up, we will throw a party!”

I was in a coma for 10 days and the doctors began to reduce my medication. While I do not remember, I woke up and ripped out all the cables connecting me to the machines. I looked at my father and said, “Enough of the small talk,” as if my subconscious had been listening to my parents all along.

When I awoke, the doctors explained nothing to me, and my fingers looked black. I could not walk, and my parents said it was a miracle I lived. I tried to calm down, thinking, I’ll be back to myself in a couple months, and I’ll be walking down the beach; but that did not happen.

The meningitis caused sepsis (the body’s extreme response to infection in which it damages its own tissues), which led to necrosis (death of the body tissue). Wounds began to appear on my body that looked like burns. They transferred me to another hospital with a burn unit. Then the worst news came. They had to do an amputation.

As they moved me from place to place on a stretcher, I could not imagine what awaited me. After several more tests and a second opinion, my parents came to speak with me. They explained every detail about my health, holding nothing back.

My heart began to pound when they said I would lose all my fingers. It felt like the world stopped but my mind raced. “Why me,” I wanted to know. “What did I do to deserve this?” I never hurt anyone and could not understand why I had to endure such suffering.

When my fingers were amputated, I continued to question what I had done wrong to deserve this. I always helped other people; I was a good person. Just as I began to recover, more shocking news came. They needed to amputate my hands and feet. While they could not say to what length they would amputate, I suddenly felt extremely fragile.

After the amputations, seeing myself without hands and feet made me feel powerless. I cried like I never had before. “I’m going to be useless for the rest of my life and nobody will love me,” I told my mother. With a cool head, she responded, “Was Stephen Hawking useless?”

[Hawking, a theoretical physicist thought to be one of the smartest humans who ever lived, became confined to a wheelchair, and lost his ability to speak after being diagnosed with Lou Gehrig’s disease. He continued to do amazing work after his diagnosis and defied his predicted life span.]

Mom’s question made me reflect and while I continued to feel insecure and sad at times, I reconsidered my life.

After my amputations, my parents presented me with a possible solution: prosthetics. At first, I refused out of fear. When I accepted the idea of wearing prosthetics, I asked my parents, “Can I add a few extra inches?” Laughing, they told me yes. They wanted to give me my life back.

The first two years since my diagnosis presented obstacle after obstacle. I left the hospital thinking I would never return, then an ulcer that almost caused me to lose the remaining part of my leg forced me back. Two complex surgeries saved my knee. I had not even fully overcome the amputations yet.

During my time in ICU when the doctors put me in a coma, my organs stopped working. Little by little everything returned to normal, except for my kidneys. I had to go through dialysis for a year and a half until my father donated a kidney. My body immediately began to improve.

Wearing the prosthetics felt like being born again. I learned to walk with my new feet and to control my new hands. I could adjust a strand of hair that fell on my forehead and pick up a cell phone. Those everyday things matter. I’m not independent but doing things for myself makes me feel better.

Being in that hospital bed felt like a nightmare, so when my parents told me to choose a sport, I felt happy. The first thing I thought of was soccer, but adapted surfing seemed the most possible and appropriate. My father taught me to swim again and with the support of a coach, I worked hard and improved.

My family and I have always been very close. We face everything together and, thanks to them, I overcame the worst moments of my life. Even my brother helped. I remember going to medical checkups and my brother stayed home and made dinner for us.

Early on, I truly believed I would be useless and would do nothing for the rest of my life. Today, as the Spanish national adapted surfing champion, I achieved a dream I had since I was a little girl. My parents also encouraged me to go to university, something that helped me a lot on a psychological level.

It took my mind off of all my fearful thoughts. I am going into my fourth year of law school, continue to have medical consultations with doctors every month, and practice surfing. I am doing well! 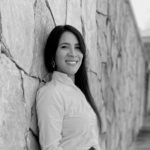