I arrived in El Salvador with mixed feelings. No one came with me and I had to do everything on my own. For two months, I got up before my alarm clock, trained hard, and played on a borrowed sports chair. I felt blown away by the support of the other players. 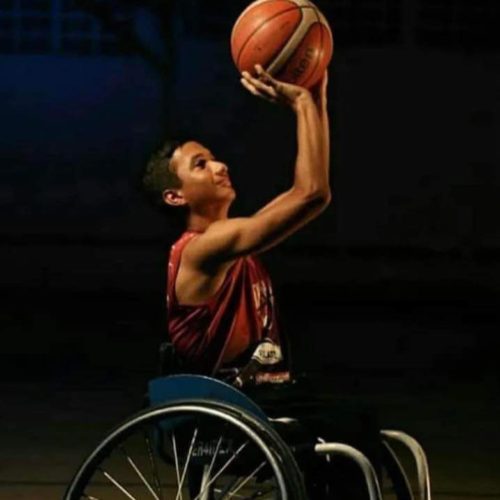 Interview Subject
Jeffry Mejía, 22, of Honduras, spent seven years with the San Pedro Thunder adapted basketball team. He coaches a conventional basketball team in the neighborhood where he lives.
Born with myelomeningocele, which is the most serious type of spina bifida, he is confined to a wheelchair to get around. He currently works with a chair for daily use but continues to seek sponsors for a sports chair customized to his size. He traveled abroad to El Salvador and played on the winning team for the national adapted basketball tournament. His big dream is to play tournaments in the United States and Spain.
Background Information
Wheelchair basketball is an adapted sport wherein people with disabilities can play in a wheelchair. The rules are adapted to the particularities of wheelchairs, harmonizing the various levels of disability of athletes. The sport remains prevalent through the world including as one of the most outstanding sports of the Paralympic Games.
Every two years, after the Paralympic Games, a gold cup is organized. This is considered a major competition in wheelchair basketball in which the countries of Canada, Australia, the United States, Great Britain, the Netherlands, and Japan participate.
The International Wheelchair Basketball Federation (IWBF) is the international body that regulates the sport. The IWBF has 82 National Wheelchair Basketball Organizations (NOWBs) and is actively involved in wheelchair basketball around the world. This number increases every year.

SAN PEDRO SULA, Honduras ꟷ I grew up loving sports and watching soccer matches all the time. Other than playing goalie once as a child, I tried my best but stopped doing it. Being born with myelomeningocele – the most serious type of spinal bifida – I underwent surgery at birth and received multiple therapies in the first years of my life.

Confined to a wheelchair, I never imaged I would join a team in a foreign country and win the National Wheelchair Basketball Tournament of El Salvador.

A few years ago, an article appeared in the newspaper inviting participants to a marathon. A sudden desire to participate and to win arose inside of me. I felt a calling to prove to myself I could do it. I could participate in a marathon in my wheelchair.

I asked my sister to help me register and purchase my ticket and I began to train hard. The day came and to my surprise, there were more than 20 people with disabilities competing. I ran for an hour and a half. By the end of the marathon, I felt exhausted, and my hands hurt. The heavy chair I had at the time proved less than ideal for someone my size, but I did not care. Even though I did not win, I gave it my all. What happened the next day changed my life forever.

Having met so many great people who became my friends, I received an invitation to be a part of the San Pedro Thunder basketball team. The very day I received the invitation, I went to practice. As a new participant in the world of training and adapted sports, I discovered many things. I needed to begin using a chair that better accommodated my needs.

Ideally, we have a chair for daily use and a chair for sports. At 16 years old, I knew nothing about this world. An older colleague allowed me to use his chair at first because its compact nature protected my spine from damage as a result of the rapid movements in basketball. Slowly, I made my way into the world of adapted sports, and I never gave up.

One day, my coach prepared to leave from Honduras to El Salvador for training. He had a meeting scheduled with the President of the Salvadoran Wheelchair Basketball Association. I dreamed of training every day, so I plucked the courage and asked coach to tell the President I wanted to train with them. In Honduras, I was the youngest member of the team but in El Salvador, all the players were around my age.

I figured he would forget and sure enough, several months passed. Then, one day, at a meeting in Guatemala, the President of the association told me he intended to invite me to play in a tournament. I became speechless, unable to comprehend what he said. I just wanted to train with them and he invited me to play.

Getting there proved challenging. I had to pay for my own transportation, so I posted on social media asking my friends and contacts for support. It generated a huge reach, hundreds of comments, and many shares. While the sports management department in my municipality denied my request, my friends and acquaintances made it possible for me to go. I became the first Honduran to play in a foreign-adapted basketball league.

I arrived in El Salvador with mixed feelings. No one came with me and I had to do everything on my own. For two months, I got up before my alarm clock, trained hard, and played on a borrowed sports chair. I felt blown away by the support of the other players.

Each of them worked with well-equipped, customized chair and every other piece of equipment they needed. I competed for seven years and never could obtain my own customized, adapted wheelchair. They inspired me.

I never missed a training session and that became the foundation of all my success. We worked longer and harder than anyone asked of us. At the tournament, we faced incredibly good teams. Our team Quezaltepeque had never won the tournament before.

On that day, I had the distinct honor of helping my team achieve victory. The excitement poured out of us. After the tournament, I returned to Honduras and received a swarm of congratulations. Calls came in requesting interviews and I began to feel I could grow professionally from the experience.

Today, I know what I like and what I want to do. I take the game of basketball seriously on and off the court. This incredible win helped me to see my potential.