Walking passed the mirror I saw the dressing pad on my wound. I murmured, “Did you see that? I have no right breast,” then I began to sob. I no longer felt whole. My knees dropped out from under me, and the shock resonated throughout my body. 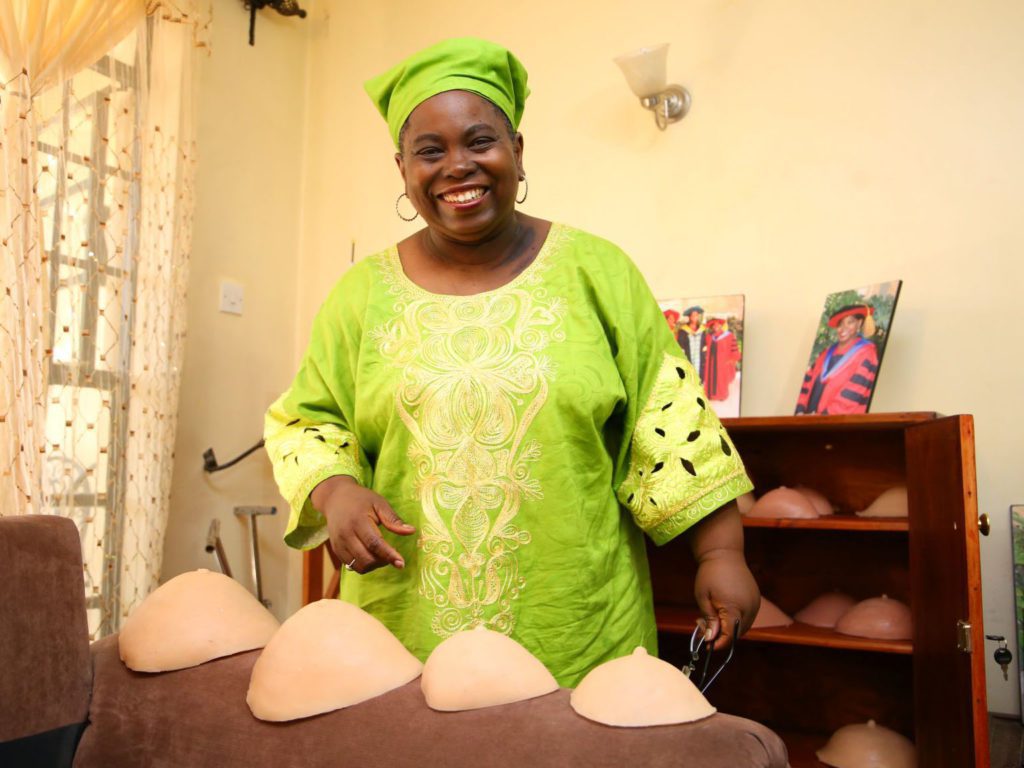 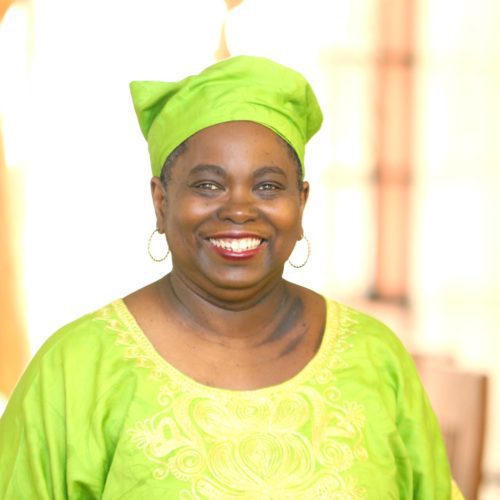 Interview Subject
Dr. Mary Mugambi, 55, works as a dietitian, nutritionist, and lecturer at the Technical University of Kenya in Nairobi. She hopes to become a full professor one day. Prior to her current appointment, she specialized in pediatrics. She earned her Ph.D. through a scholarship at the University of Stellenbosch in South Africa.

A four-time breast cancer survivor, she underwent a mastectomy and founded Anuumii, a social enterprise that makes medical grade silicone breast prostheses to help women feel whole again. The fledgling company faces challenges with the prices of importing silicone, shipping, and customs duty, but she perseveres.

She is a radio host and presenter for Health Talk Radio Africa.
Background Information
In a global effort to raise awareness on breast cancer, the World Health Organization designated October as a Pink Month, educating society on early identification and signs and symptoms associated with breast cancer. About 90 percent of early-stage breast cancers are curable, often with treatments that conserve the breast. Self-examination once a month for any early signs, visiting doctors regularly, and getting mammography periodically is advised. Every year, breast cancer kills more than 500,000 women around the world. In resource-poor settings, a majority of women with breast cancer are diagnosed at an advanced stage of disease, resulting in low survival rates.

I can never forget the first time I got cancer. I went to bed one night as usual, clicking off the bedside lamp. As I laid down sleepily in the dark, my hand landed on my chest on my right breast. I felt a slight pain and it jolted me awake. It felt hard. As someone in the healthcare field, I thought, “Wait a minute, I should not have this on my breast.”

I muttered to myself and sat up instantly. I tapped my sleeping husband and said, “Sweetie, I found a lump.” “Go get it checked tomorrow,” he responded groggily. I wanted to hit him because in the back of mind, I thought, “Do you know what that is? It’s a lump,” but he was already asleep. I felt shocked to my core. In the morning, I texted my siblings and my mother.

Mother and daughter face breast cancer at the same time

With a diagnosis in hand, the doctor informed me I had stage two cancer in my breast. He praised me for detecting it early, ensuring the cancer had not spread. It did not matter that I served as a doctor, teaching in the health professions at the university, or that in that moment, one doctor spoke to another. As a human, your mind still races.

At 49-years-old, I faced a choice: remove the breast or work on removing the lump. I decided to remove the lump, going through chemotherapy and radiation. By pure coincidence, 30 days after my diagnosis, my mother learned she had cancer in the same breast.

From that moment on, we went through treatment together, with the same doctor at the same hospital. We made our appointments together, sat side-by-side, and after chemo we left together. She often drove me home before returning to her own house.

When I underwent chemotherapy, my side effects often kicked in within three to four hours, unlike some women who go a few days. The first side effect I noticed was lack of appetite. I poked around at my food with a fork, uninterested. By evening, fatigue set in, then came nausea. Often, I slept for seven days, day and night. My body offered just enough strength to sit up in bed or make it to the dining room for a meal or cup of coffee. After thirty or forty minutes, I returned to sleep, holding myself against the wall as I made my way to the bedroom.

Nearly a year later, in the same month, doctors declared my mother and I cancer free. We celebrated my 50th birthday on a Sunday, cutting the cake and taking pictures. We did not realize it would be our last celebration with our mum.

Her cancer resurfaced four months later aggressively. She began feeling dizzy and could barely walk. After driving herself to the hospital, the doctors expressed concern and called us. My sister and I went to get her and found out the cancer had spread to her brain, chest, and throughout her body. She fought for three months before we lost her.

Losing my mother proved extremely difficult and hit me psychologically. “How could we go through the same illness, and she died, but I survived,” I thought. We buried her in 2017 and I still grieve, but that was not the only battle I would face.

After being cancer free for all of 2018, in July the following year, it happened again. I sat in my dining room marking exam papers for my university students. Bundled up in warm clothes, I put my hands in my armpits to warm them up. Almost in the same place, I felt another lump. My mouth fell open and the pen dropped to the floor.

This time, in front of all my siblings, the doctors delivered the news – stage two breast cancer again. After losing our mum, we all felt terrified. This time, we decided to go to India for more detailed exams and treatment. Two of my sisters joined me.

In India, four doctors examined me. “Keep the breast and die; lose the breast and live,” they said. The doctors also gave me shocking news: I had the brca gene for breast cancer. Wanting to return to my husband and children, I chose a mastectomy.

It took days for the gravity of the situation to hit me. I joked with my sisters at first and have a difficult time remembering the rest of that day. No woman can be fully ready for losing her breasts. I awoke after surgery and two nurses held me up and took me to the bathroom.

Walking passed the mirror I saw the dressing pad on my wound. I murmured, “Did you see that? I have no right breast,” then I began to sob. In that moment, I no longer felt whole. My knees dropped out from under me, and the shock resonated throughout my body.

Lying in bed during recovery, I had so many hours to think. In those moments, I reassured myself I would survive. Before I boarded the airplane for home, it dawned on me, I would walk onto the plane without a breast. I decided to purchase a prosthetic breast in India and when I wore it, I felt whole again.

Once my treatment ended and I returned to work, I often worried where my next prosthetic would come from. One day, while watching the show “Face Off” on television, the make-up artists created prosthetic breasts for their characters using silicone. It piqued my curiosity and I began researching techniques and materials. I made many attempts at great financial expense, but eventually, I created a prototype.

Sitting in my oncologists office, I revealed my prosthetic breast prototype. “I developed this,” I said to her. “Do you think some women might be interested?” Her face lit up and she said we needed this yesterday! Can you refine it and make more?

As I refined my prototype, I faced cancer two more times and ultimately bankrupted my family, but I pressed on. I continued to work on my project and eventually showed it to my doctor. Then, I began sharing it on Facebook and WhatsApp, talking to people, and sharing it with friends.

I soon realized very few prosthetics like mine existed in the market so I began selling them here and there, offering women a permanent solution – something they buy once and do not need to buy again. It may not be a great business model, but it helps those who need it. While managing my startup and supporting other women, I continued to fight for my own life.

I see the women posing with their prosthetic breast. Their faces beam with happiness as they admire themselves in the mirror. Women come to me with big scars, always hiding their chests. They buy the prosthetic, put it on after a fitting, and walk out without wearing the scarf that covers them. Often, they hand me the cotton and wool they used to hide their scars, “Mary, I want you to throw this away,” they insist.

I walk to the kitchen and drop it in the dustbin. These moments keep me moving forward with my work.