For seven hours, my newborn body lay in the ground. When my aunt dug out the grave in the middle of the night, she found me breathing… I cannot say how many awards I have won. Even Queen Elizabeth honored me with a gold medal in 1985… but my most important achievement is that no more girls are being killed in the Sapera community of Rajasthan. 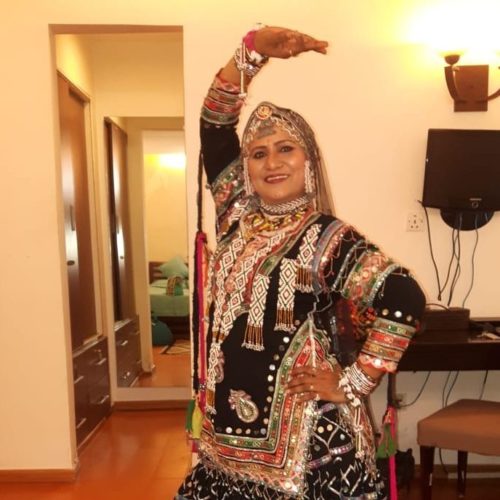 Interview Subject
Gulabo Sapera, a Kalbelia dancer from Jaipur, Rajasthan in India, was buried alive when she was born female in the snake charmer community of Sapera. Often female children were killed as soon as they were born. Gulabo was saved by her aunt. She grew up with a fear of being killed and at the age of seven she ran away. She became an internationally known dancer, famed for her creation of the folk dance known as Kalbelia. She has been honored by world leaders ranging from the Queen of England to the Prime Minister of India.
Background Information
According to a poll by the Thomson Reuters Foundation, India ranks the most unsafe country for women. According to the United Nations, out of the 142.6 million missing females around the world, India accounts for 45.8 million. The article continued, between 2013 and 2017, around 460,000 girls went missing at birth. While the practice is outlawed, it is suspected to continue. Some say the practice became exacerbated throughout the 1990s as ultrasound equipment allowed sex identification before birth. One article in 2019 reported a rise of “selective abortions” after no female child was born across 132 villages over a three-month period.

JAIPUR, India ꟷ Like many girls born into the Sapera community in the 1970s (India’s dominant cultural group of snake charmers in Rajasthan), I nearly became a victim of female infanticide. When my mother gave birth to me in 1973, with my umbilical cord still intact, the people buried me alive. As fate would have it, my aunt dug me out of my grave at midnight and saved my life. [While the practice has since been outlawed in India, some argue selective abortions continue.]

I was not born to die a terrible death. Instead, I have ruled my world with dance and song. As the creator of Rajasthan’s celebrated folk dance Kalbelia, I became the first and only woman from my community to win the Padma Shri (the highest civilian award in India).

Infant buried in a grave for seven hours survives

For seven hours, my newborn body lay in the ground. When my aunt dug out the grave in the middle of the night, she found me breathing. From then on, my father called me special. My family first named me Dhanvanti because my birthday fell on Dhanteras (a festival celebrated at the start of Diwali, aimed at increasing wealth and prosperity).

Read more stores out of India from Orato World Media.

As a child, I fell critically ill, and the doctors declared me dead. Somehow, I survived and at the Dargah Sharif shrine in Ajmer, they placed a rose on my chest and renamed me Gulabi. “Dhanvanti died and Gulabi is born,” my father said. The name I have become popular for, however, is Gulabo, attributed to a simple typo in a popular magazine.

The seventh child of my family, my father went against the practice of killing girl children. Out of fear for my death, he started taking me with him everywhere he went. I soon became acquainted with dance. My father began to give me the leftover milk meant for snakes. While the community did not like it, they let me dance during Holi. Doing so allowed my family to obtain money and food.

Young woman who survived death dances for leaders around the world

In 1981, an official from the Rajasthan Tourism Department named Tripti Pandey (the sister of singer Ila Arun) spotted me dancing in Pushkar.

She came to me and said you dance like you don’t have bones in your body. This practice of dancing like a snake became known as Kalbelia. Later she convinced my father to let me perform in a show, my first time on stage. As a seven-year-old girl, I danced until dusk.

To that point, I had only danced on the road where people throw coins to show their approval. On stage, the audience clapped for me. I did not understand, thinking they wanted me to stop. I later learned the stage serves a temple of sorts and clapping means they like you.

The community disliked my dancing on stage or what they referred to as takhta (a piece of wood). They threatened to abandon my family. I decided to run away and made a new home for myself in Jaipur. The community eventually rejected my family and they joined me. Since then, we have not looked back.

After being discovered at a performance in Delhi, organizers invited me to perform at a cultural event in America but my father refused. He hated the idea of traveling abroad. It took time, but they eventually convinced him. Since that day, I have traveled to Germany, France, Japan, Brazil, and England. I have danced across the length and breadth of the world.

In Washington, D.C. in 1985, I danced for the Prime Minister of India Rajiv Gandhi. He instantly made me his sister. While many requests came in for me to continue performing in the United States, I wanted to be in my country and spread the dance. I told Rajiv and he asked me to tie the rakhi on him – an ornamental cotton wristband place by a girl or woman on the wrist of her brother. It proved a pivotal moment.

Later, Maharani Gayatri Devi (the third Queen consort of Jaipur), saw me perform and immediately called me the daughter of Rajasthan. “I adopt you as my daughter and you are the daughter of Rajasthan,” she said. I cannot say how many awards I have won. Even Queen Elizabeth honored me with a gold medal in 1985. Today, I own a dance school called Gulabo Sapera Dance Academy and I teach Sapera-Kalbelia. I continue to travel around the world for the love of dance.

Looking back at my journey, my most important achievement is that no more girls are being killed in the Sapera community of Rajasthan. Instead, thousands of girls dance worldwide, expanding my artform and stepping out into work, no less than their male peers. I feel like the president of my community.