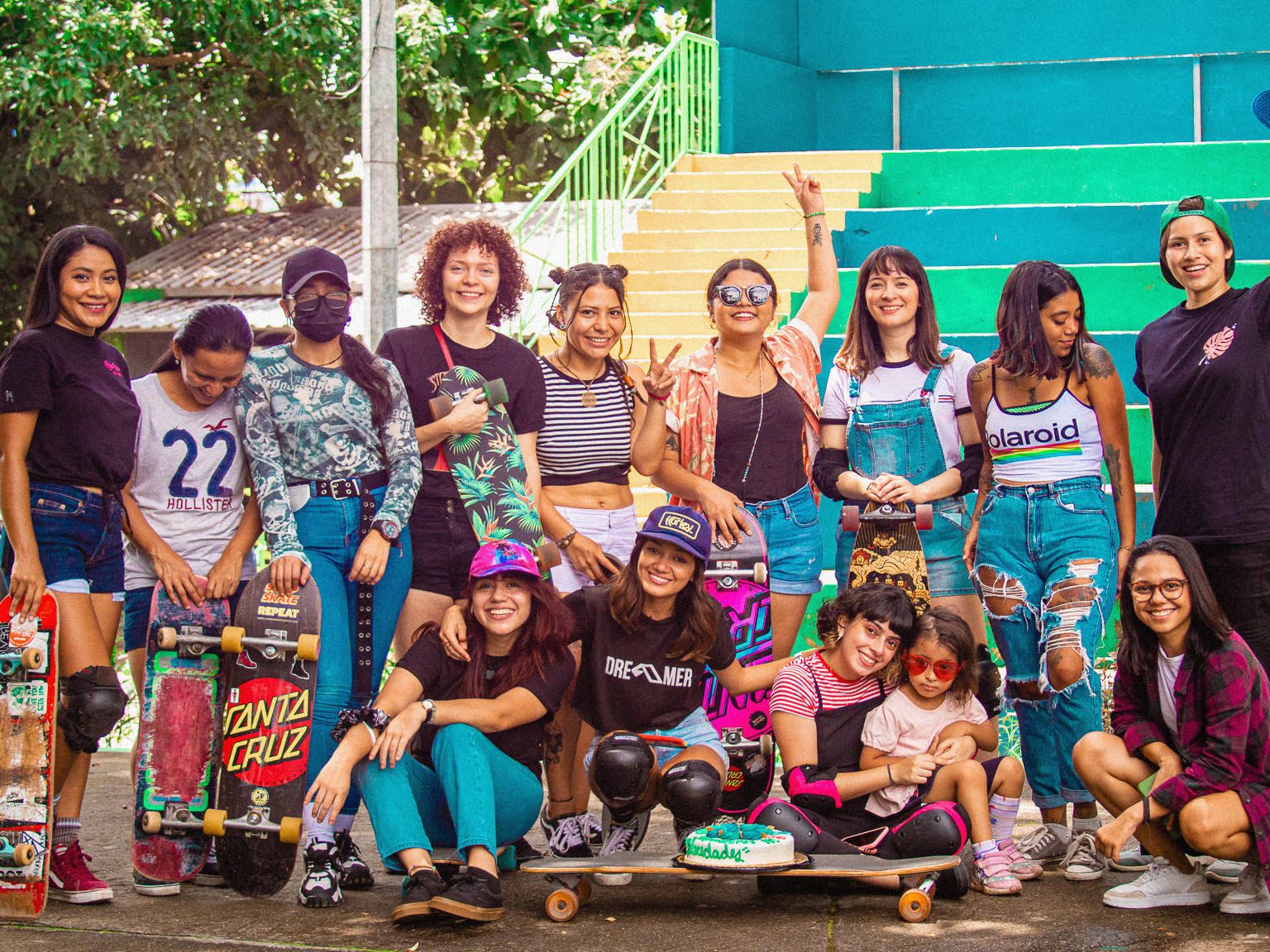 Rider Sisters as of 2021, breaking stereotypes and skating in their usual gathering place | Photo courtesy of Stefany Castaneda

Rider Sisters has become a social responsibility. It shows the wonders women can accomplish together. As female skaters, we share a path, and we are opening opportunities for other women. 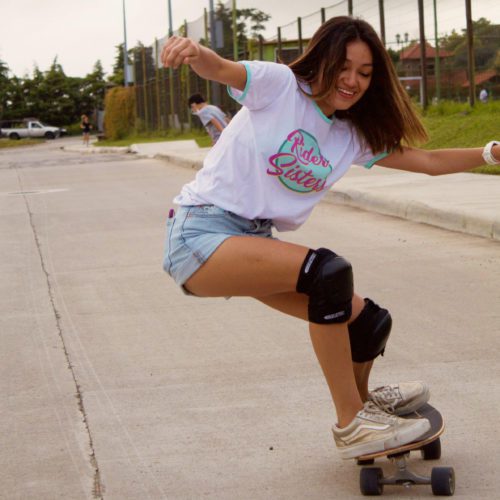 Interview Subject
Stefany Castaneda, 27, is a recent graduate with a bachelor’s in tourism management. She is the founder and leader of the first female skating group in El Salvador: the Rider Sisters.

Recently, Stefany became an ambassador for Longboard Girls Crew from Madrid. They have around 60 representatives around the world. Her role is all about empowering women and promoting skating in El Salvador. The ambassadors hold a meeting once a month, sharing their progress.
Background Information
Gender-based Violence in El Salvador: According to the United Nations General Assembly, figures on sexual violence in El Salvador remain a cause of great concern. The data provided by the Institute of Forensic Medicine showed an increase from 3,368 sexual violence cases in 2007 to 4,120 in 2008.

The Salvadoran Institute for the Development of Women declared that between March 1 and June 30, 2020, care was provided to 707 women; 55.4% of those cases indicated situations related to psychological violence (392), followed by 17.4% who were treated for physical violence. Both types of violence represent 72.8% of the cases that came in.

During the same period, the PNC registered a total of 958 crimes related to acts of violence against women.

SAN SALVADOR, El Salvador- I have been drawn to boards since I can remember. Growing up, I loved watching my father surf and skate. He was the reason I ever stepped onto a skateboard.

Today, I am the leader of Rider Sisters, a skating community exclusively for women of all ages, where we listen, protect, support, and challenge each other.

Growing up as a female skater in a male-dominated sport

When I was a child, my father regularly surfed and skateboarded with his friends; it was the norm. It intrigued me, and I would spend hours just watching them. I began to ask my dad to teach me how to skateboard, but he was always busy working.

One day, maybe because I was a little older or insistent enough, he told me, “Listen, I’ll buy you a board.” He taught me the basics, but that was it. If I wanted to learn more, I would have to commit and do it by myself; and that is what happened. I practiced every day, experimenting with new things all the time.

I fell in love with skateboarding. It is my passion, and I really cannot imagine myself doing anything else. At first, I practiced in secluded areas; space was limited, but it was enough for my needs. As I progressed, I needed challenges and places with ramps. Slowly, I befriended guys who skate and would go with them to parks, not caring I was the only girl. I just wanted to have fun and practice.

I remember I constantly felt frustrated in the beginning, impatient that my progress was not as fast as I wanted it to be and upset because I could not go and practice whenever I wanted and at my own pace. Others always had to come along for safety.

My skateboarding journey paused for a short time because I had no one who could teach me the things I wanted to learn. It did not last long, though; I restarted and self-taught through videos.

It was tough to be the only woman within a group of men, but that was not enough to prevent me from learning, practicing, and perfecting what I love.

Despite my love for skating, it has not been an easy road. I could not just show up in public parks and skate alone. The dependency on others was annoying—I wanted to skate daily, but sometimes I had to wait days until friends could come along with me—but it was the best I could do.

I occasionally brought some of my girlfriends along, but most girls are not interested in skating due to prejudice and gender stereotyping. My attempts to get them excited or involved often came to nothing.

Being in a group was safer, but that did not mean I was untouchable or that other skaters in the park would respect me.

I practiced at some of the well-known skate parks, such as El Cafetalon or Parque Cuzcatlan, but it was hard to enjoy my time there. Knowing that something could happen, I was always on guard. I remember I wore shorts a few times, and as soon as I arrived, I noticed sexual gestures, followed by verbal harassment and insults. I felt objectified and unsafe.

My gender and the way I dressed weren’t the only problems; more advanced skaters also treated me disrespectfully if I lacked advanced skills in their eyes. They made comments if someone was below their level. They were rude and would go out of their way to make me feel like a nuisance.

I remember one time I was trying to learn a new trick, and someone shouted, “This is not a place for you to learn.” I was not surprised, but this time, I didn’t stay quiet. I replied, “Look, this space is for everyone. If you can practice here, I can too.”

El Salvador is not a place where you can argue with strangers, let alone a female skater with a man. You never know what could happen. It did not escalate physically, but I had to leave.

A kernel of an idea begins to grow

For a short time, incredibly busy with work and college, I contemplated thoughts of leaving skating behind me. I was tired of feeling like an outcast.

Then the COVID-19 pandemic hit.

Watching videos about groups of female skaters from Los Angeles and Spain, I would wonder, how different would it be if I had something like that here? I would dream about it, but the idea seemed incredibly unreachable.

I experienced anxiety during the isolation of the pandemic, but decided to channel it by writing and planning out my ideas. From the flurry of my thoughts, my inner voice found a way out: you have to encourage a change.

I figured there must be other women who want to skate freely and feel the same way I do. I finally realized that I had to be the one to create the community of my dreams; giving it my best, I came up with a name and a logo idea. Now, I just needed to search for those kindred spirits.

I was part of a Facebook group where women openly discussed their experiences with abuse. At first, it was for emotional relief, and then, it became a place of empowerment. Instead of complaining about our sexist culture and pitying each other, we would talk about solutions.

Many of the members shared their projects and ventures, so I posted about mine when I was ready. It received about 500 likes and many comments. I felt so elated.

However, the second time I tried to post, it was rejected. The administrators notified me that it had too much engagement to be appropriate for that space. It was disheartening to feel that women did not have my back. They never shared a valid reason for their rejection.

I was able to get in touch with some girls that responded to my first post and created a separate group. However, I lost momentum and couldn’t reach out to everyone. That experience lowered my spirits. I could not understand why women would treat other women like enemies.

For this and other reasons, the year 2020 was a challenge for my mental health. I fell ill and experienced depression. I did not want to do anything.

As I started therapy and meditation, I slowly started regaining my energy. I am confident that creating that group saved my life. It gave me a purpose again after I got better. I hosted our first in-person meeting on May 23, 2021; we were about 10 to 12 women.

The purpose of that first meeting was just to get a few of us together. I could have never imaged the impact that would have.

We began meeting every week. I felt so excited, finally doing what I had been dreaming about: skating with a female group. Every week, more women and girls of all ages showed up, with the youngest being just 5.

It is incredible to see the progress some of the younger girls have made. Their passion fills my heart with joy. It is breathtaking what a group of women can do when they take care of each other. There is camaraderie, and we all share our equipment to take turns. Lately, I barely have time to skate. Now I teach, guide, and help others; what a rewarding experience!

I am always surprised by the positive comments and the support from other people. Several men have shown up to encourage and support our cause, including my friends and father. My partner at that time told me, “You have to believe in yourself. There are girls out there that need a safe space and are going through the same experience. They need this.” I will never forget those words.

All of these women saved my life and continue to enrich it. They are incredible and talented. I am grateful to be part of Rider Sisters. I never thought it would become something so special and meaningful. Not only have we become a female skating community, but we genuinely share a bond. We are confidants and are there for each other, even when it does not include a skateboard.

Rider Sisters has become a social responsibility. It shows the wonders women can accomplish together. As female skaters, we share a path, and we are opening opportunities for other women. 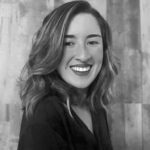 Daniella Mejia is a business administration graduate with a specialization in international business and a minor in digital marketing.

She has more than three years of experience in design and translation. Fluent in English and Spanish, she served as an interpreter and field assistant for Habitat for Humanity in El Salvador. During that time, she discovered her love for social work and the power that everyone’s unique story holds.

In addition, Daniella served as a design specialist for an educational consultant that specializes in risk management and child safety in Canada. As well as, she is a freelance social media designer for a Latin American magazine based in Vancouver.

She hopes that her journey with Orato allows her to tie together two passions: digital marketing and storytelling.