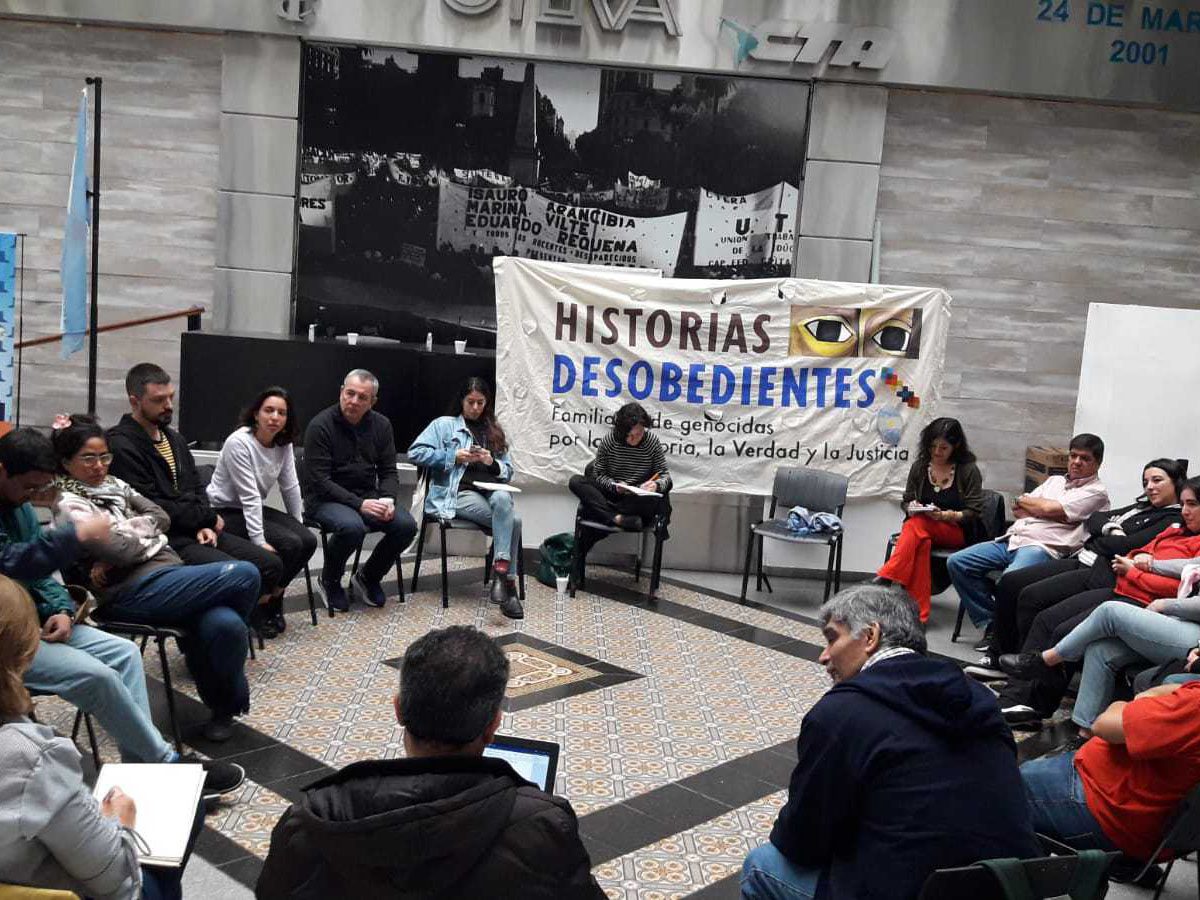 My father worked in groups which operated in clandestine detention centers. As I went through it all, my hands began shaking intensely. I read the testimonies - accounts from survivors and people my father tortured. 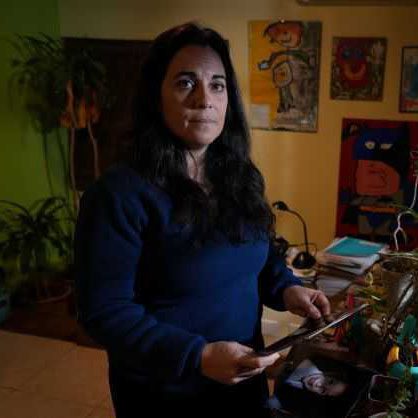 Interview Subject
Analía Kalinec, 42, was born in 1980 in the midst of a military dictatorship. A teacher, psychologist, and currently a law student, she is the mother of two teenage children.
Her father, Eduardo Kalinec, is a repressor who acted in the clandestine centers that made up the Banco Olimpo Atlético circuit during the last military dictatorship.
Background Information
In August 2005, the father of Analía Kalinec, a retired Argentine police officer, Eduardo Kalinec, was arrested and charged with crimes against humanity. Years later, he was found guilty and sentenced to life in prison.

The writing of “I will carry your name,” Analia’s first book, was part of “wanting to understand the incomprehensible.” It reconstructs from different personal written records, letters sent and received, newspaper articles, resolutions, and court rulings, a story that belongs to her, her family, and the entire country. It depicts the path she traveled since finding out that her father is a repressor.

Historias Desobedientes is a group that is made up of daughters, sons, and relatives of personnel from the armed and security forces responsible for crimes against humanity during the last civic-military dictatorship in Argentina. It originated in May 2017 after the decision of the Supreme Court of Justice of the Nation to apply Law No. 24,390, known as the Ley del dos por uno Law.

BUENOS AIRES, Argentina — Some things will never make sense to me, like my father’s position as a torturer for the dictatorship in Argentina. How could a human being reach that level of cruelty? His silence remains even more incomprehensible.

As his daughter, I have lived through and suffered from his actions. He cannot or will not review his crimes, repent, and consider the damage he inflicted on others. I find it difficult to understand.

At first, I thought my dad fought for our country. I cried my eyes out, thinking he was being subjected to an unfair accusation. Now I realize, I always faced a murderer.

My father, Eduardo Kalinec, served as commissioner of the Federal Police, an institution which ran through the veins of our family history. Two of my younger sisters also work in the force.

In 2005, the government detained my father. Since then, I began to trace our family’s steps. I went from not being able to see the truth of what was happening to breaking all ties with my family. Around mid-2008, any connection or conversation with my father vanquished.

The federal judge Daniel Rafecas raised the case and accusations, and my father would stand trial. The last time I ever saw him, he was detained in Devoto prison. I returned from that visit after arguing with him and my mother and sisters. My eldest sister already cut ties when father first became detained. Our family bond never returned to what it once was.

Recently, I heard from him again. He sued me for indignity, with the sole purpose of disinheriting me after my mother’s death. The title page of the lawsuit he drafted bears the word, “Excluded.”

In 2005, officials arrested my father and accused him of crimes against humanity. It became the first time I realized my father’s role during the dictatorship in Argentina, also known as the Dirty War between 1976 and 1983. Until then, I had no awareness of the existence of a dictatorship. I did not know I was born in a dictatorship, or the context of my country’s political climate.

Born in 1980, I grew up in years of impunity. After Argentina’s return to democracy, the past became a topic my social circle and family never discussed. It simply seemed off limits as if it never existed.

When I learned the context of my father’s involvement, I took a hard blow. I began to go with my family to visit him in prison without understanding what happened. I listened to the family’s discourse. “This is a mistake,” they said. “It will clear up because your dad is a good man.”

I read about the clandestine center’s operations, how the dictatorship worked during those years, and some information describing the defendants. My father worked in groups which operated in clandestine detention centers. As I went through it all, my hands began shaking intensely. I read the testimonies – accounts from survivors and people my father tortured. I discovered the data on people who disappeared. That became a turning point for me because I saw the evidence. I could no longer allow myself to ignore it or pretend not to know.

When I found out, several questions arose in my mind. At first, I felt very guilty and ashamed. However, my family reaffirmed their position, defending my father. They decided to expel me, and I walked away. The decision was mutual.

On a social level, I felt shameful. As stories came out in the media bearing my father’s name, I wanted to die. I broke into pieces and hoped no one would connect me with him. However, I could not hide it for long.

One day, my son told other children at his kindergarten that he went to jail to visit his grandfather who was detained for killing many people. His words circulated among the parents. At the same time, in the school where I worked, a colleague, whose brother was missing, approached me. She asked if I had something to do with Eduardo Kalinec, and I felt challenged.

It strengthened my decision to distance myself from my father and his actions. It also made me uncomfortable because I had to explain that even though I was his daughter, I did not share in what he did. People assumed I thought like my father, but I repudiated his actions. It disturbed me.

I went through a stage of intense personal growth as I attended therapy. I also went to school and graduated as a psychologist. In 2015, when Mauricio Macri won the elections in Argentina, signs of change grew in public policy. He assumed a right-wing government and made public the statements from some of Argentina’s highest officials who denied and fought against human rights organizations.

Our journey as a society toward improved human rights permeated several families who experienced genocide. In 2017, a controversial Supreme Court ruling supported a legal device named the Two for One Law. It allowed people who had been convicted of crimes against humanity to get out of jail sooner. Public outcry ensured and the court overturned the decision.

Many relatives of genocide victims spoke out publicly, making it possible for us to meet. As a result, the collective was founded and named Historias Desobedientes. It includes daughters and sons of genocide victims, grandchildren, brothers, nephews, and godchildren. This group transcends borders, with collectives in Chile, Brazil, Uruguay, Paraguay, El Salvador, Germany, and Spain. Some of them even link descendants of Nazis and genocides under Francoism.

The book I published, “I will carry his name,” reviews 20 years of history with a linear narrative. It accounts for my journey and the changes in my perspective about my dad – from seeing him as a victim to pleading with him to be sorry for what he did. After all of this, he initiated a lawsuit against me to block my inheritance after my mother’s death.

The lawsuit in civil court written by my father calls me unworthy. I lived through it with great anguish. In an attempt to hurt me and eliminate me, the cover uses the word elution [the removal of antibody from the antigen to which it is attached]. It means I’m out of everything.

The suit shows intolerance towards another. It reconfigures my bond with my father. I no longer find myself connected to him. He no longer exists to me as he reaffirms himself as hateful and cruel. The sinister comes to light. I faced a loved one capable of committing the most heinous crimes.

The emotional cost of this entire process rises high. The rupture of the relationship with my father does not leave a clean slate. He became an object of study for me. I learned all I could about relatives of repressors, kidnappers, torturers, and executioners. I reviewed the investigation and the accusations that prompted his trial, and I went to trial against him.

For us, something operates at an unconscious level. It involves inherited trauma and issues transmitted to us. We inherit the burden of a story, and we do what we can with it. We bare the social, historical, and cultural developments of this generational issue.

My contribution includes trying to put something back together. I made the decision to carry my last name and continue calling him dad, against his will. Yet, I cannot allow him not to be my father. I name him father because that is what he is. I am his daughter, and I repudiate his crimes. I demand he shares what he knows from that period of history. Though he wants to exclude and disinherit me, I am his daughter, no matter what happens.