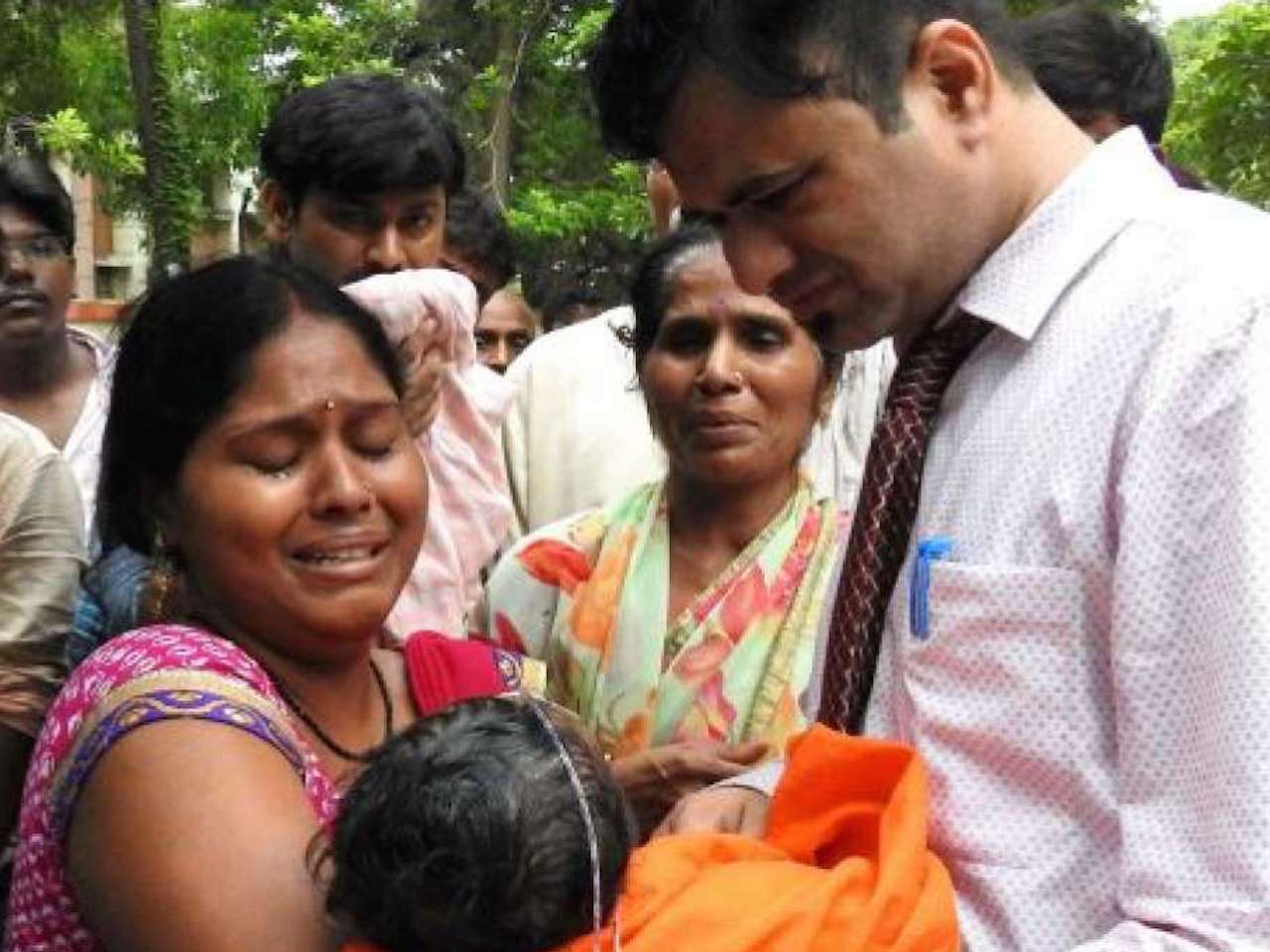 Dr. Kafeel Khan at the Gorakhpur hospital in 2017.

The cops stripped me naked and beat me with sticks and belts. I'd cry, scream, beg — urinating was severely painful. They didn't give me water and food for five days. I had to chew my clothes. I was in so much pain I could have eaten grass. 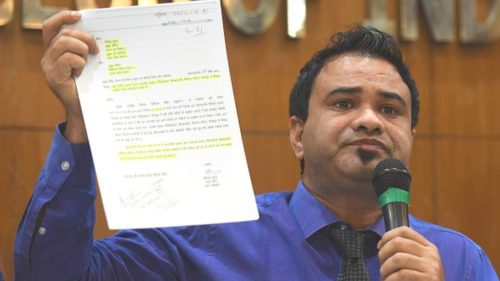 Interview Request
Dr. Kafeel Khan is a medical doctor who earned his M.B.B.S. and M.D. in Pediatrics from Manipal Institute of Medical Sciences.

During school, he studied in a private hospital. Then, on August 8, 2016, he joined the B.R.D. Medical College in Gorakhpur, India as a junior consultant. Working in a government-run facility exposed a vastly different culture.

Khan says he was trained to make a difference and he took an oath to treat patients to the best of his ability; to put the sick and suffering before himself. He says he was not warned that saving lives would be penalized by the government.

Khan was jailed for nine months on charges of culpable homicide and negligence after more than 60 children died at the hospital in August 2017 as a result of an oxygen shortage. He was eventually exonerated of the charges. Most of the deaths occurred because a supplier cut the hospital’s oxygen supply due to unpaid bills.

After being released from prison, Khan began to speak out and was then arrested for causing discord. He was tortured in prison and eventually exonerated again. Today, he is an activist and practicing physician who has helped thousands of patients through COVID-19.
Background
India’s Citizenship Amendment Act 2019 amends the definition of an illegal immigrant to include Hindu, Sikh, Parsi, Buddhist, and Christian immigrants from Pakistan, Afghanistan, and Bangladesh, who have lived in India without documentation.

The protesters say the law discriminates against Muslims and violates the right to equality enshrined in the Constitution.
Dr. Khan’s supporters say he’s a living symbol of “state and religious oppression” under prime minister Narendra Modi’s rule.

Regarding healthcare in India, according to a June 2021 article from the Center for Global Development, India’s public and private hospitals source oxygen from the market which, at times, has led to oxygen shortages resulting in myriad deaths.

NEW DELHI, India — Soon after completing my medical education, I joined the B.R.D. Medical College in Gorakhpur as a junior consultant.

One evening at midnight, I received a WhatsApp message in the Junior Doctors group. For four and a half hours, the government-run facility where we worked had gone without a supply of oxygen.

I immediately rushed there. The shortage continued for 54 hours. More than 400 children were hospitalized at that time, and 63 died due to lack of oxygen.

When the piped oxygen flow was affected, there were deaths in the other wards too. Eighteen patients died in the medicine ward.

Deaths were reported from the gynecology ward, including many pregnant women. Deaths also occurred in the trauma center. It was a man-made massacre.

Parents scream as their children die one by one

During the crisis, I ordered over 500 jumbo oxygen cylinders from nearby hospitals and suppliers. I paid for them myself. Still, we fell short.

The jumbo cylinders did not work properly with the hospital’s ventilators because they need a continuous flow of liquid oxygen to save lives.

The children paid the price. There was deafening silence inside the pediatric ward. Child after child died in front of me.

Parents were screaming outside the gate. They were begging me to save their children. I was horrified.

The tragedy could have been averted had the state government paid 58,000,000 Indian Rupees ($80,000 USD) to the liquid oxygen supplier in time.

The B.R.D. Medical College administration knew the supply of liquid oxygen would be disrupted and ultimately were cut off for nonpayment.

The supplier had written 14 letters to warn the state chief minister to release the funds or he would stop supplying the oxygen.

Because of corruption in the system, the officials wanted a 10 percent commission, so they did not pay.

In response to the crisis, the state health minister said, “People die every day. Why create so much fuss?” There was a huge public outcry.

The government became irritated that I was praised for arranging the oxygen and their decisions were being exposed. To change the narrative, they put me behind bars.

I am a Muslim doctor, so it was easy to blame me without society asking to check the facts. Sixteen junior doctors, nurses, and ward staff worked together to handle the crisis while it was happening, but I was singled out as the scapegoat.

The allegations held me responsible for the tragedy, claiming I had not informed my superiors of the short timeframe before the oxygen ran out.

They alleged I received a commission on every hospital purchase, handled the deals with the oxygen cylinder supplier, and stole cylinders for my private clinic.

The national media condemned me. The news anchors in Delhi and Mumbai never investigated my character. They acted as if I was running the hospital.

As they focused on me, the country stopped talking about the 63 children who lost their lives. The media dismissed the $80,000 bill owed to the supplier. No one questioned the chief minister nor the health minister after that.

Doctor marked as an enemy of the state

On the day the oxygen cylinders arrived, the chief minister finally came to the hospital. I thought I would get a pat on the back, but instead, he asked why I arranged for the oxygen.

“You think by arranging cylinders you became a hero,” he said to me. These words turned my life upside down. I knew I would become a scapegoat and a political prisoner.

In the past four years, I have been to prison three times.

I initially surrendered myself to save my family from humiliation, believing I would get justice in court. On September 2, 2017, I was put behind bars for nine months.

I felt as though I did not exist. The court refused to hear my bail plea. So, on April 18, 2018, I wrote a 10-page letter from prison proclaiming my innocence. It was released to the media on April 20.

Surprisingly, I got bail seven days later. In September 2018, I was arrested again for “arguing with doctors and disturbing staff who were treating the patients” in Bahraich’s district hospital.

This time, I was put behind bars for 45 days, essentially for irking the government. Finally, two years after the infant deaths, I was absolved of all charges.

On January 30, 2020, a special task force arrested me again for delivering an “inflammatory speech” the previous month at a protest at Aligarh Muslim University denouncing the Citizenship Amendment Act (C.A.A.).

The state police department accused me of “sowing seeds of discord toward other religious communities.” They invoked the National Security Act, which allows the government to detain people for up to one year without a trial.

This time, they wanted to break me.

Activist vindicated by the court but tortured in prison

In prison, I was physically and mentally tortured. I was held in isolation and could not speak to or visit with fellow prisoners. The cops stripped me naked and beat me with sticks and belts.

I had to wait in a 30-minute queue to use the bathroom when I was suffering from urinary pain. I would cry, scream, and beg for help.

They withheld water and food for five days. I began to chew on my clothes. I was in so much pain I could have eaten grass. They said I would get food only if I promised to stop criticizing the C.A.A. and the government.

They threatened that the chief minister would have me killed if I talked about the oxygen tragedy at the hospital.

When the COVID-19 Pandemic hit, I was shifted to a small barrack where over 100 prisoners shared the same toilet. Thousands of mosquitoes and flies swarmed the area. It was congested, hot, and awful.

No investigation, no charges, no arrests

In the High Court’s order, they upheld my speech at the university saying it had integrity and espoused the unity of India. It did not propagate any kind of violence or hatred. I was released from prison after spending seven horrible months in jail, but our nightmare did not end.

In 2018, my brother, who looks like me, was shot three times near the chief minister’s house. He survived the attack.

It has been three years since the shooting and there was no investigation, no charges, and no one was arrested. I still receive threats from goons who warn, “After your brother, it is your turn.”

This experience has been very difficult for my family. My 65-year-old mother came to court for me during the peak of COVID-19. My wife and two daughters fear for their lives. The worst part of the tragedy was missing my kids growing up.

When I was studying pediatric medicine, my teachers told me, “You will witness milestones when you become the father.”

My eldest daughter was 11-months-old when I was first arrested. When I returned after nine months, she was running, speaking, and climbing stairs. She did not recognize me.

Nine hospital workers were suspended in 2017. Eight were reinstated. I was not.

The deaths of those 63 children and the plight of their parents matters to me. The lack of oxygen India witnessed in April and May of 2021 (India’s ‘Oxygen Man’ breathes life into region | Orato), I witnessed in 2017.

We still gasp for oxygen every day. We feel the same pain and face the same struggle. It is not because of COVID-19. Our healthcare system has collapsed. The pandemic exposed already existing problems.

Half of them die on their way and those who manage to get there, receive improper treatment. I have started the health-for-all campaign to realize my dream: for every Indian to receive free primary healthcare within 5 kilometers (3 miles) of their home.

Working with ‘Doctors on Road,’ a collective of doctors and activists who bring healthcare information about COVID-19 to rural India, has helped my endeavors. I also seek justice for the parents of the children who died. I demand accountability.

The C.A.A., which bans Muslims from neighboring South Asian countries from gaining Indian citizenship, is an anti-national law. In fact, the United Nations has dubbed the C.A.A. “fundamentally discriminatory.”

The issues are not what god you worship or what type of burial ground should be built, based on your religion, but this is the government’s focus. Health is an issue; education is an issue; rights are an issue.

I accuse the state government of indulging in sectarian politics and ignoring the real issues. This authoritarian government can try with all its might to suppress voices of dissent, justice, equality, and unity, but I will not be afraid, no matter how much they threaten me.

The government does not want an educated Muslim raising his voice about equality.