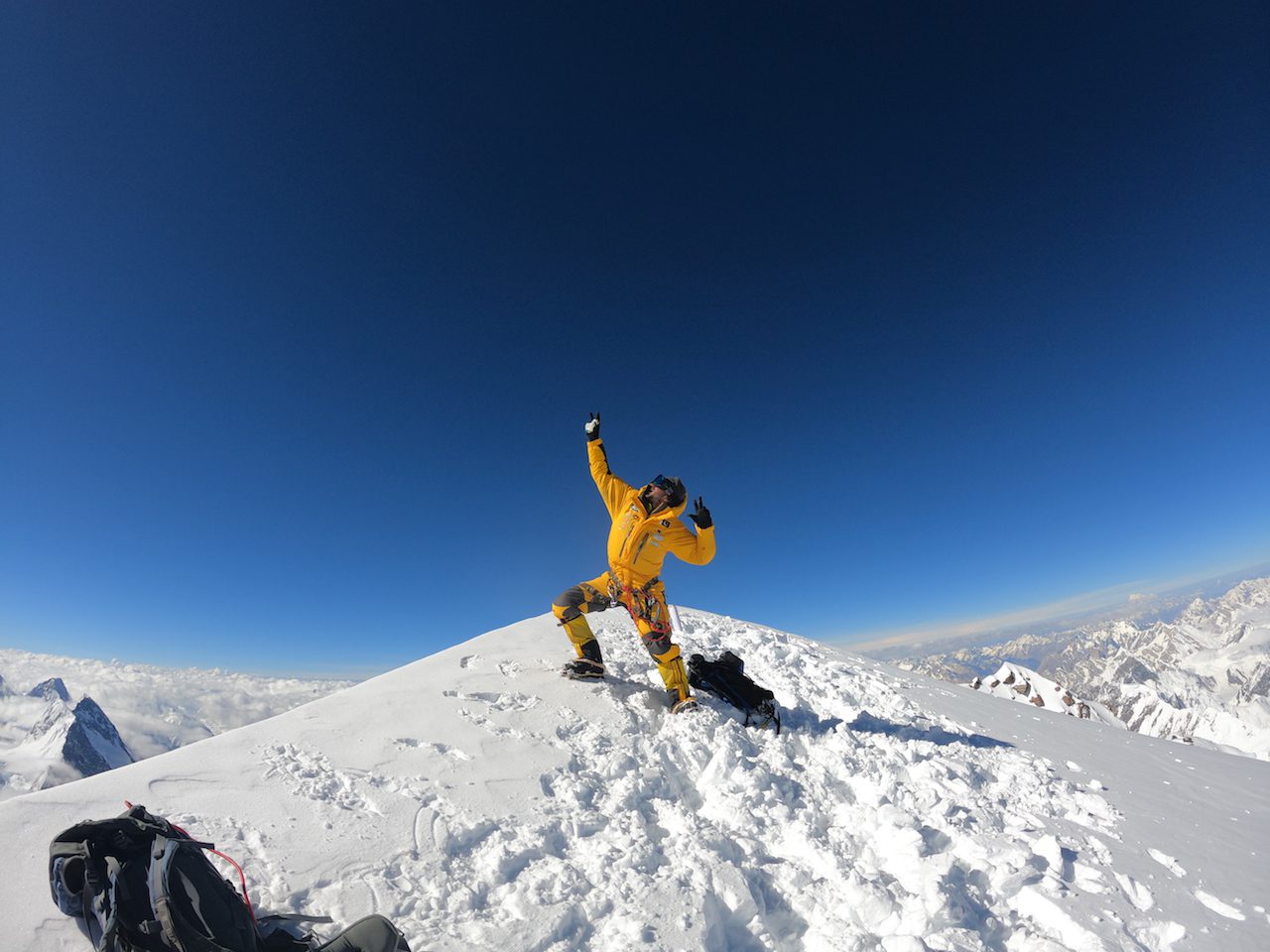 Shehroze Kashif, 19, is the youngest Pakistani mountaineer to reach the summit of Mount Everest and K2.

I witnessed fellow climbers perish. I heard many screaming for help at the top of their lungs. Sometimes, I stopped dead in my tracks.

Interview Subject
19-year-old Pakistani mountaineer Shehroze Kashif holds the distinction of being the world’s youngest mountaineer to reach the summit of K2 and the youngest Pakistani to climb Mount Everest.

After the successful summit of Mount Everest, Sports Board Punjab made him the youth ambassador of Punjab , Pakistan.

His Instagram account “thebroadboy” details his treks in photos and his YouTube Channel captures video footage of his hikes. He can also be found on Facebook @TheBroadBoy and Twitter @Shehrozekashif2.
background
Before Kashif, Pakistani climber Sajid Sadpara was the youngest person to summit K2 at 20. Samina Baig is the first and youngest Muslim woman to climb Mount Everest at the age of 21. She has climbed seven of the 14 8,000-meter peaks.

Though K2 is the world’s second-highest peak, it is deadlier due to its steep rock faces, glacier climbs, and devastatingly brutal weather.

According to Vanessa O’Brien, the first American-British woman to successfully climb K2, as difficult as the ascent is, the descent is even deadlier. In 2008, a steep gully ridge broke free, sending an avalanche crashing into a team of mountaineers, causing most of the 11 deaths that day in K2’s deadliest disaster.
Eighty-seven climbers have died trying to conquer its treacherous slopes since 1954.

Only 377 have successfully reached the summit. In contrast, Everest has been climbed more than 9,000 times, while approximately 300 have died on the mountain.

LAHORE, Pakistan — I was 11 years old when I went on a hiking trip with my father to Shogran [a lush high plain in the Kaghan Valley of Northern Pakistan].

It was my first experience camping in the mountains and I was enthralled.

My father pointed out the “trekkers” who sought to reach the top of Makra Peak, 3,885 meters (2.4 miles) above us. They carried sticks and backpacks.

After a week of prodding, I convinced my father to take me back to the Valley and climb the peak. He hired a guide to accompany me while he waited at Base Camp.

After four hours, I returned to Base Camp. My father thought I had grown tired and turned around halfway. He was shocked to find I had summited my first peak at 11 years old.

I discovered my love of climbing.

From Rock Bottom To Broad Peak

Over the next few years, I continued to train for longer and harder treks. Sometimes I climbed 26-hours in one trip.

I felt unstoppable. When I turned 16, I decided to attempt Broad Peak, the twelfth-highest mountain in the world at 8,047 meters (5 miles). The expedition was a complete failure due to immature preparations.

The experience was so awful, I decided not to climb again. Ultimately, the catastrophe marked a turning point in my life.

The experience of failure gave me a reason to come back stronger and more resilient. The lessons I learned grew my confidence and self-esteem for more challenging expeditions.

I was fit, healthy, young, and determined, but I had lacked the skills to go on a dangerous mountain trail. After that, I began training my body and my mind for endurance.

I bought the right equipment and enhanced the technical skills necessary to push my body at high altitudes. In 2018, at 17 years of age, I became the youngest person in the world to climb Broad Peak.

Climbing the most dangerous mountain

After that, I wanted to climb the highest mountain in the world. I set my sights on Mount Everest. It was a tough call, considering I was still a teenager and the climb is arduous.

I spent close to two months at Base Camp and took multiple shorter treks up the mountain to adjust to the conditions and acclimate to the low-oxygen environment.

Base Camp sits at an elevation of 5364 meters (3.3 miles), higher than nearly every mountain in Europe and tall enough to cause health emergencies.

The route is mostly a long, slow, technically challenging, oxygen-starved ascent. I was nervous at first, but I didn’t rush as I navigated layers of constantly shifting, gigantic ice blocks.

I witnessed fellow climbers suffering and heard some screaming for help at the top of their lungs. Sometimes, I stopped dead in my tracks. I gasped for air, but I had no choice but to keep climbing.

I was in Everest’s “Death Zone” for 24 hours. [Oxygen is so limited in the Death Zone the body’s cells begin to die. Hikers have to use supplemental oxygen tanks. Most deaths climbing Everest occur in the Death Zone.]

On May 11, 2021, I became the youngest Pakistani and only the fourth teenager in the world to climb Mount Everest. I was on top of the world, literally! I felt like I could touch the sky.

From Mount Everest to K2, the climb continued

When I returned home, the climbing season in Pakistan was at its peak. Climbers from across the world were preparing to leave for base camps to acclimate for K2, GII, and Broad Peak. Though I was exhausted, I followed everything that was happening.

On July 2, 2021, I had a dream. I saw myself at the K2 Base Camp discussing my plans with other climbers. I woke up and started packing.

My father was shocked when I told him I planned to climb K2, the second-highest mountain on Earth at 8611 meters (5.3 miles). He was furious and concerned. I had spent 70 days at Everest and not even a month had passed since I returned.

His anger was justified. I did not have enough energy to get back to climbing. I promised to return if I felt drained and my father relented.

The Everest expedition cost me 10 million Pakistani Rupees ($60,000 USD), with no sponsorship from the government or the private sector. I wanted to get a sponsor for K2 because my father handled the whole expense of Mount Everest.

I thought my only challenges were to convince my father and obtain the funds to climb K2, but I faced an even bigger challenge. We had difficulty finding a high-altitude porter (HAP) but after significant research, one surfaced.

He had not climbed in four years and after our first rotation to Camp 1, he got sick and had to leave. I was left to carry 19 kilograms of load – including food, bottled oxygen, gadgets, and climbing gear – all the way to the top.

I found two friends who hailed from Nepal – Lakpa Sherpa and Sanu Sherpa – who guided me and helped me achieve my dream.

American climber George Bell once said that K2 is a savage mountain that tries to kill you. He was right. It is an avalanche-prone mountain marked with falling rocks. The weather is terrible and unpredictable.

In 2008, eleven climbers perished trying to summit the pyramid-shaped mountain. I had heard it all. Now, here I was, experiencing it first-hand.

The initial stretches at Everest are steep, and then it flattens off. However, very little of K2 ever flattens. The mountain does not allow you to settle down.

I passed the most challenging part of my climb, and before I could take a sigh of relief, another steep climb awaited me.

At Camp 1, I began to wonder if I had the strength and skill to climb House’s Chimney. During the first rotation, I planned to reach Camp 2, but after climbing House’s Chimney, a rock hit me near my right ear.

I blacked out. Deep in pain, I returned to Base Camp to rest. Descent is always the best decision because you can only climb K2 if you survive.

Eventually, I began the ascent of the world’s hardest mountain. I survived the Black Pyramid section between Camp 2 and Camp 3, along the Abruzzi Spur route. From Shoulder to Bottleneck, it was a test of my endurance.

The “savage mountain” is a dream of any climber. Only about 400 climbers in the world have summited K2. I feel proud to join their club.

I was the youngest to achieve the feat and I completed it in only 13 days. After ascending the summit, I prayed to Allah.

My Parents Climbed The Mountains With Me

You would be surprised to know, my friends, relatives, and neighbors discouraged and demoralized me. They would ask, “What do you do when you go up?” In frustration, I would reply, “Come back after reaching the top.”

The next statement is always, “Oh man, you are so crazy. You spent so much money to waste your time!”

It was my father who stood by me like a rock. He would spend hours listening to me talk about my journey and experiences. I was his Superman.

He didn’t know anything about climbing, mountaineering, or the importance of reaching the top of treacherous terrains. Yet, he allowed me to fulfill my dream.

My father received a lot of hate for this. People said he was “sending me to die for money and fame.” He would always advise me to ignore the jealous and competitive mountaineers and respond by achieving my dreams.

After climbing K2, my mother asked me if I missed home. I replied, “I am at home.” My home is where the mountains are.

With Allah’s and my parents’ blessings, next I hope to climb Kangchenjunga (8586 meters or 5.3 miles) and Lhotse (8516 meters or 5.29 miles) – the world’s third and fourth highest mountain peaks.