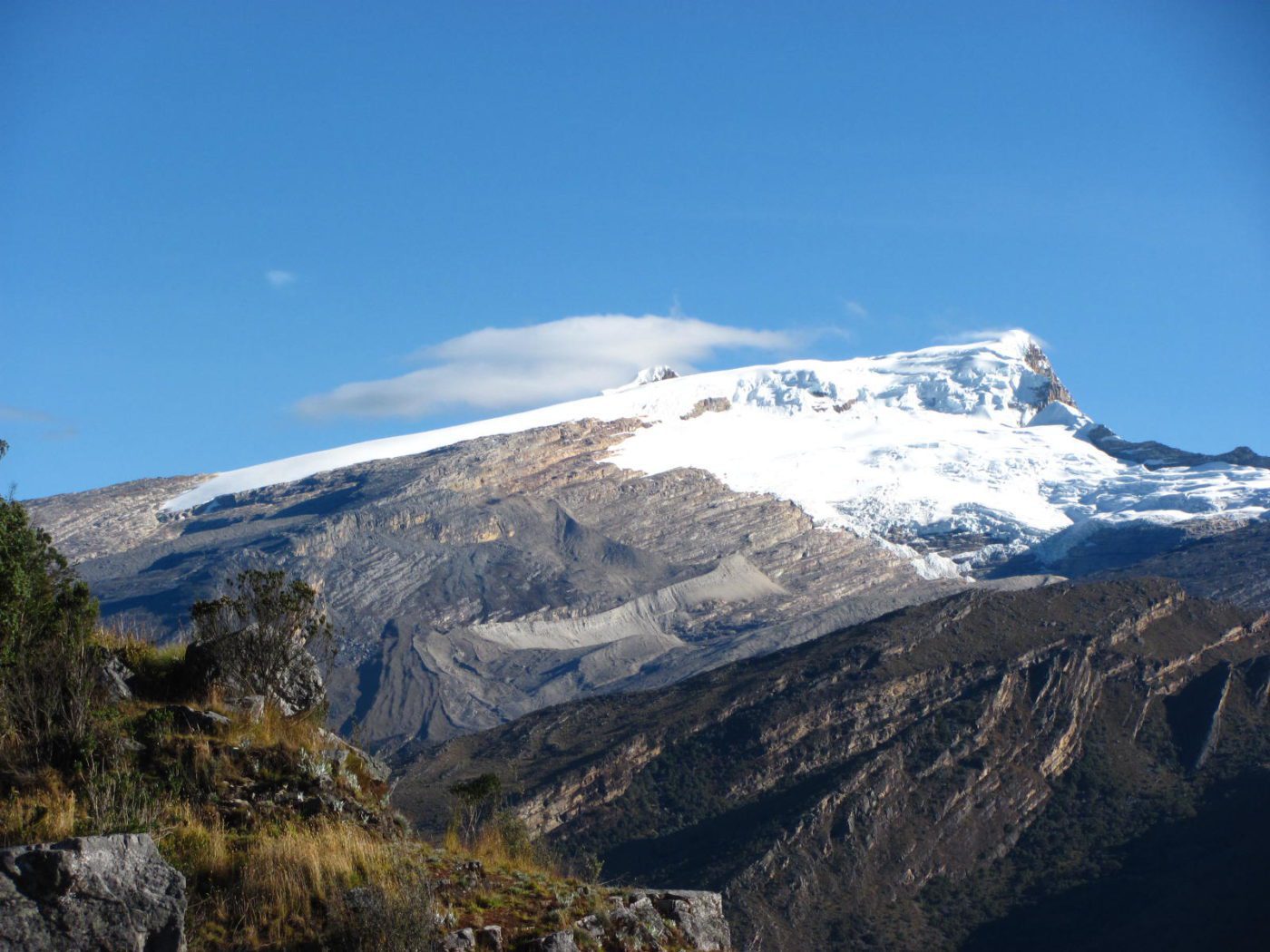 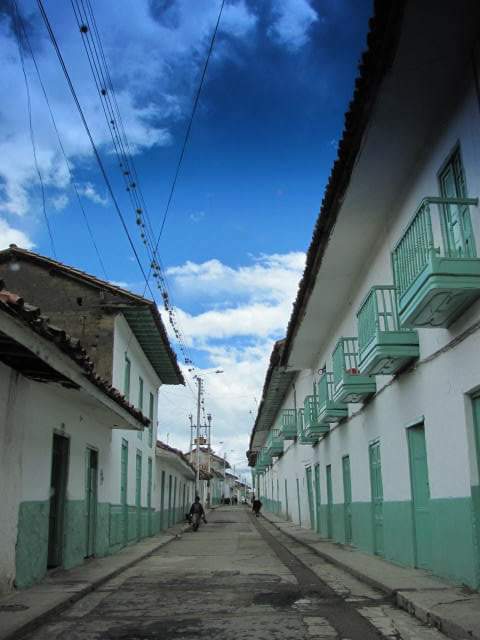 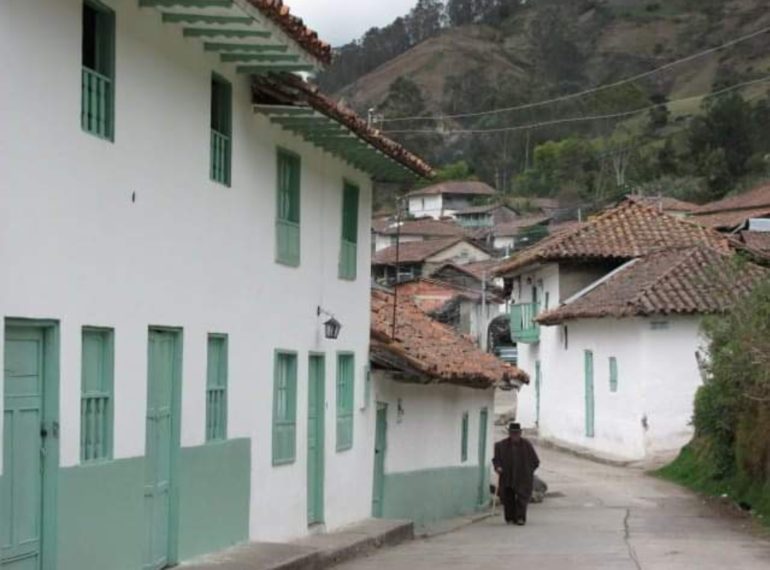 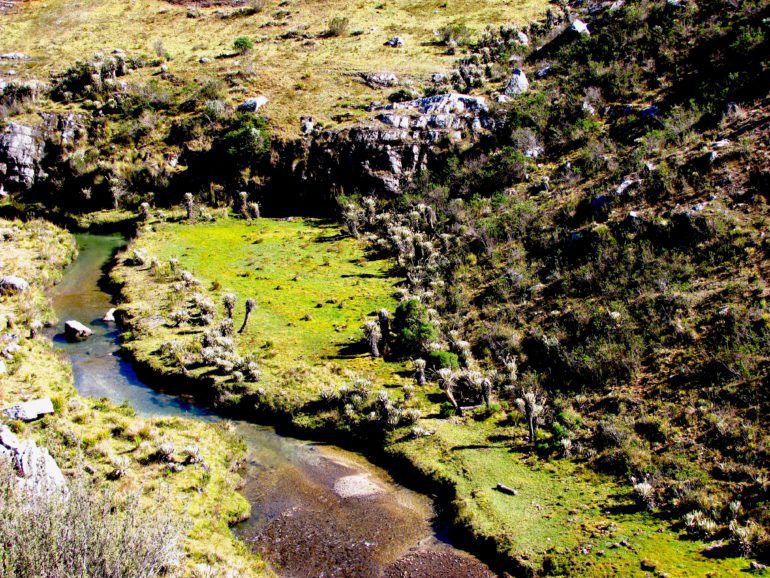 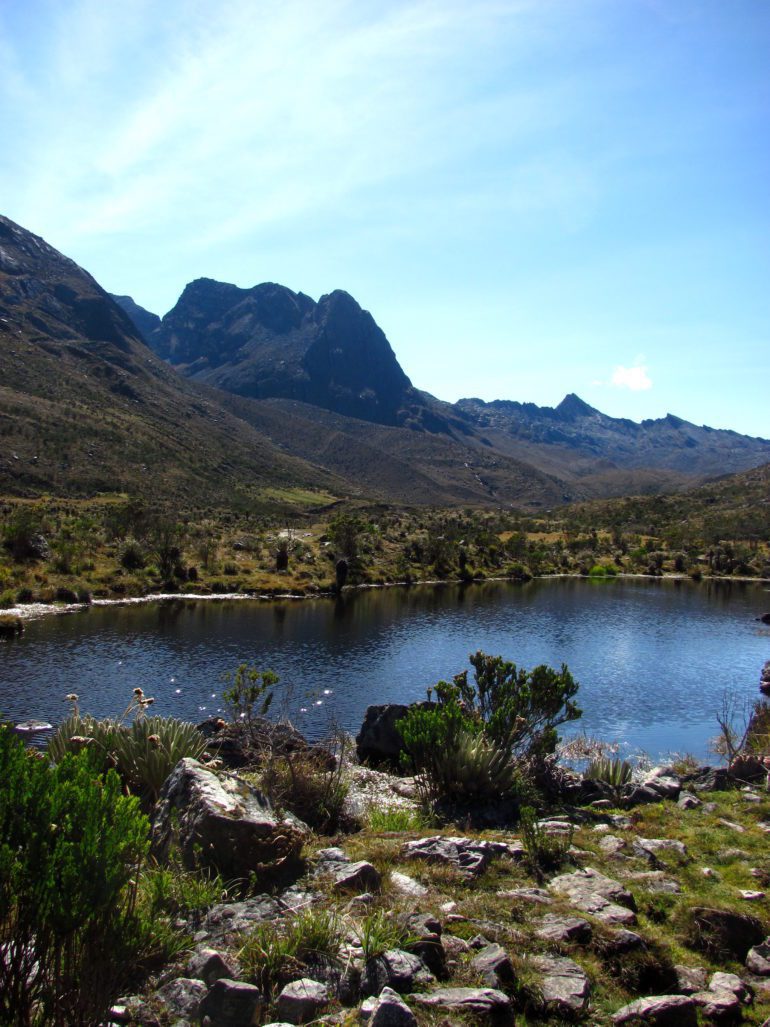 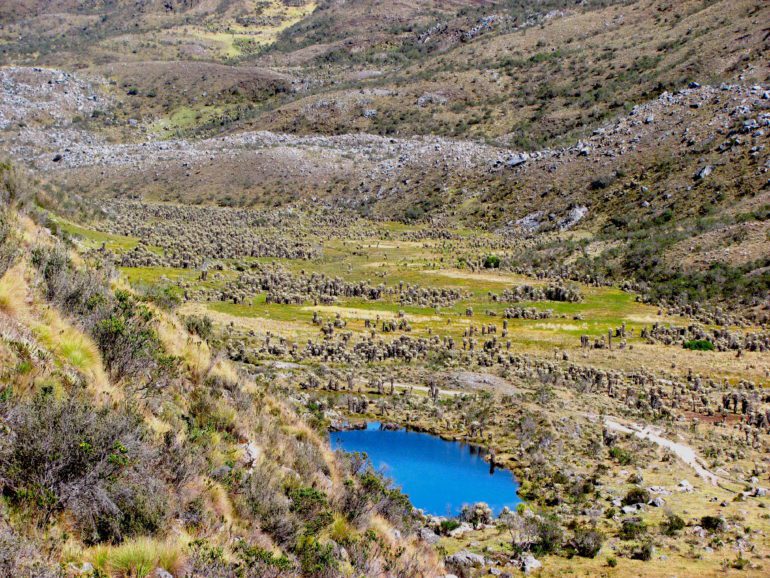 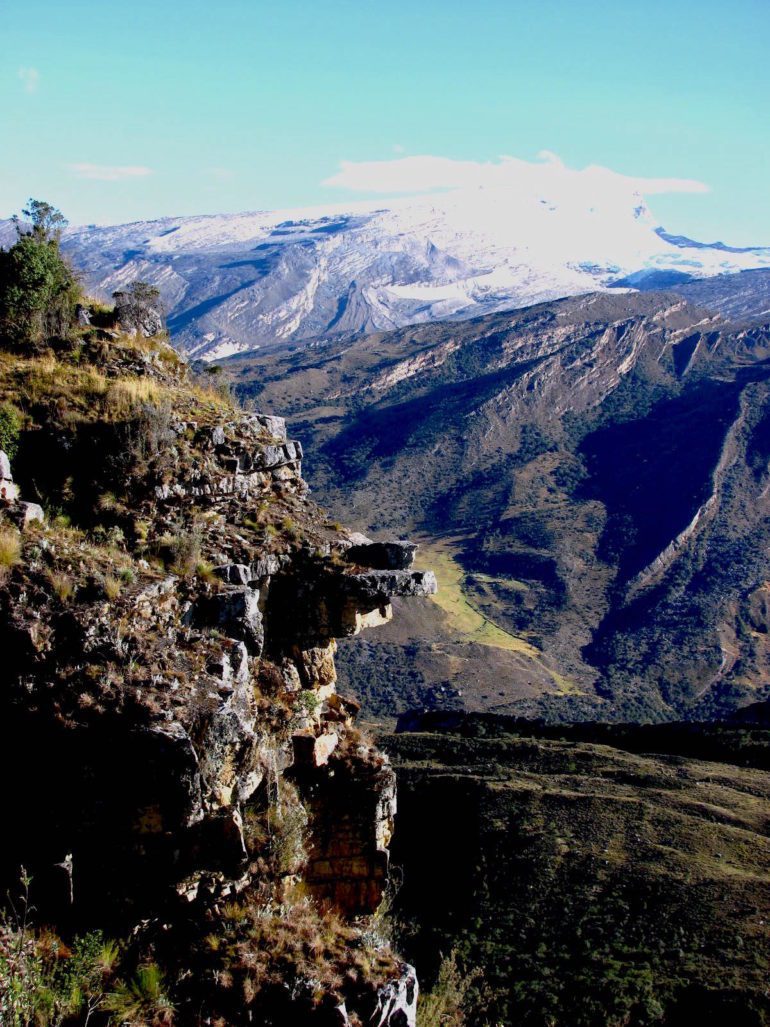 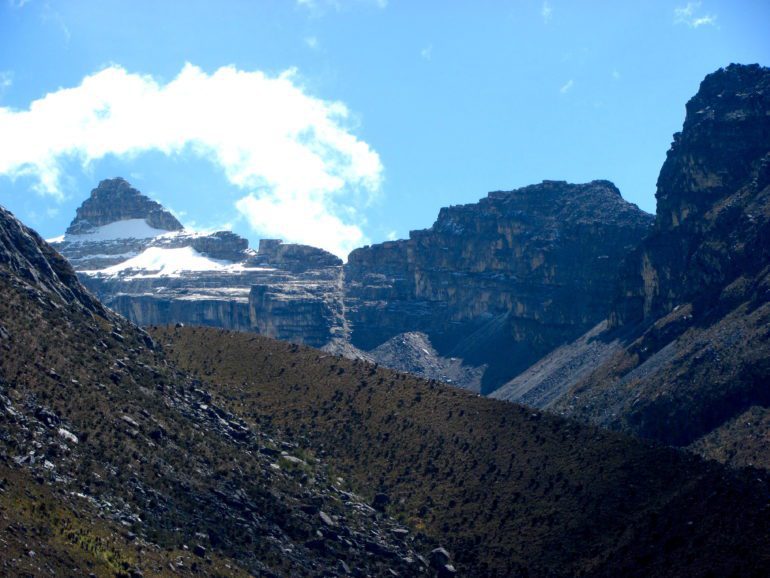 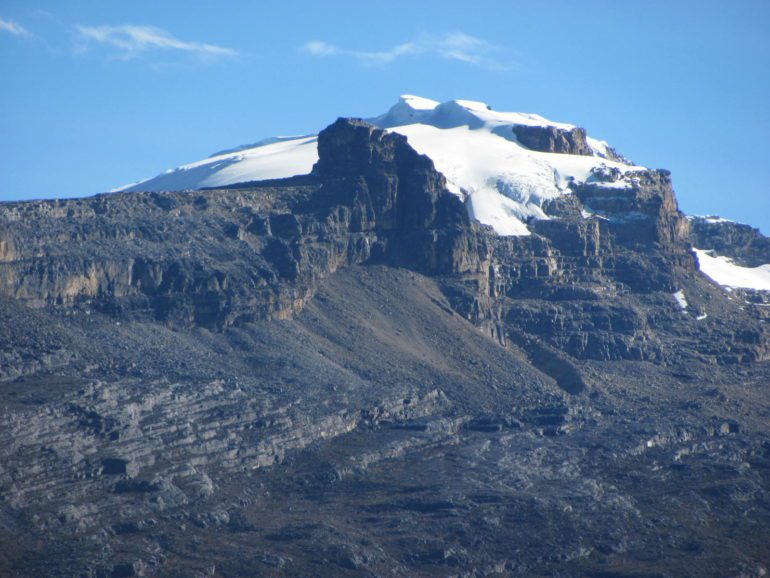 I returned to Santa Isabel last year after not being there for nine months due to the COVID-19 Pandemic. During that time, the snow-caps melted significantly. To see the caps nearly without snow triggered a sadness in me, knowing something I spent a lifetime studying may soon disappear. 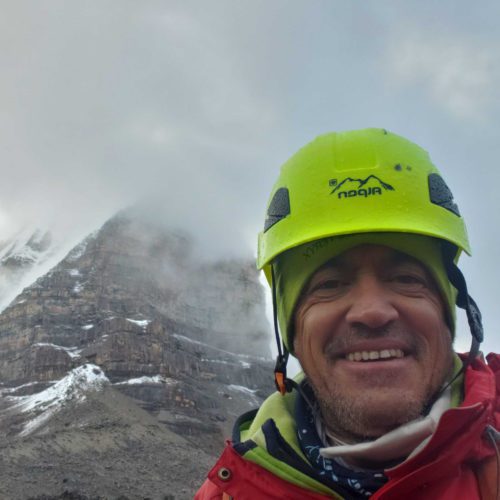 Interview Subject
Jorge Ceballos, a geographer by training, is perhaps the only glaciologist in Colombia. His mission for several years has been to periodically monitor the glaciers of Santa Isabel, the lowest-altitude snow-capped mountain in Colombia, and the Sierra Nevada de Chita, El Cocuy and Güicán, the largest glacier in the country. Jorge is a first-hand witness to the progressive disappearance of these snowy giants in Colombia, due to climate change.

Jorge points out that these changes are also opportunities and among these is the opportunity to train new generations of glaciologists, as well as to include the communities in participatory projects that in some way can teach them to adapt and assume the climatic impacts in their territories.
Background Information
The melting of snow-capped mountains is one of the most visible and immediate effects of climate change. The snow caps are the most affected by this change and it will be their inhabitants who will have to face what it means to live with less water, less arable land, more extreme temperatures, fewer tropical forests and jungles, and without glaciers. “The last glaciologist” as he has been baptized, carries an immense responsibility on his shoulders, but also recognizes a moderate optimism in the face of the irreversible effects of climate change.

BOGOTÁ, Colombia ꟷ People often ask why I study glaciers. After all, they will only disappear. Generations to come will know a far different landscape. I say, if the glaciers disappear, then those of us who study them will disappear too.

For 25 years, I have worked to interpret what the glaciers say to us as they evolve and change. People think I climb mountains and summits. I do not. Mountaineers humanize the terrain they climb, asking permission to enter. I go to the summits for scientific data, but I become privileged to contemplate the most beautiful landscapes in Colombia.

Witnessing the earth’s beauty and impact of climate change

When I witnessed the opening of the volcano Nevado del Ruíz, I cried; and the mountain peaks behind the Nevado de El Cocuy national park proved the most beautiful sight I ever witnessed.

In 2019, a condor passed right in front of my eyes, less than ten meters away. It floated down from the Santa Isabel snow-caps. I suddenly heard a sound like a whistle and there it was in all its majesty in front of me.

I returned to Santa Isabel last year after not being there for nine months due to the COVID-19 Pandemic. During that time, the snow-caps melted significantly. To see the caps nearly without snow triggered a sadness in me, knowing something I spent a lifetime studying may soon disappear.

One thing always remains the same, though – the silence that inhabits the mountains. On my 2019 trip up Santa Isabel, I injured my back. I needed to stop and lie down while others continued the ascent, so I laid in the soft snow looking at the glacier submerged in clouds. I could see nothing but white. The moment felt magical.

The road to becoming a geographic engineer

You could say I am person defined by extremes. In my youth, I dreamed of becoming an astronomer but to study astronomy in Colombia proved nearly impossible. I considered microbiology but, in the end, chance led me to geographic engineering.

As I finished high school, I applied to the National University of Colombia to study Geography but failed the admissions exam. One afternoon, watching Spanish journalist José Fernández Gómez on TV, he interviewed the director of geographic engineering from Jorge Tadeo Lozano University.

The director explained how the program included astronomy, topography, geology, and biology. Right then, I decided to become a geographic engineer.

In college, I wanted to understand the workings of natural systems and forms of earth. Geomorphology examines the workings of the landscape, mountains, rivers, and coasts. It explores the relationship between climate and people.

I felt touched by the topic. Since then, Geomorphology seems to rarely be taught, like an abandoned science replaced by biology, biodiversity, and ecosystems. Neglecting geomorphology means neglecting geodiversity.

For example, geosystems remain more complex than ecosystems. Understanding geosystems allows us to better interpret our natural environment and territory. The geosystem involves not only nature, such as rock, soil, vegetation, climate, and water, but also the use of the territory. Colombia remains a country full of geosystems.

The study of the high peaks

Abandoning earth sciences in Colombia seems ironic since Colombia boasts the diversity of the Amazon, Orinoquía, deserts, and coasts. My professors came from Europe, and some even retired from their jobs at home to come teach in Colombia. With them, a generation of scholars and earth sciences ended.

To Colombians, glaciers seem like a distant and cold structure far away where wealthy sportsmen take trips. Any glaciers in Colombia became restricted due to violence in the country. Between the 1930’s and 1950’s the white summits were dominated by foreigners.

Germans who came to study the geology of the country drew up the first geological map and described the volcanoes and rocks, while the Colombian peasants were the ones who loaded their equipment and rented their mules. Over time, in the seventies, Colombians began to venture into the snowy mountains. We learned the techniques of the Europeans, and mountaineering groups began to form in Colombia. We still saw glaciers as a sporting challenge and not a scientific one.

From geographic engineer to glaciologist

When I came to work at the Agustín Codazzi Geographical Institute, a German corporation financed a project to study glaciers, which began melting by the end of the 1980’s. The project consisted of locating meteorological stations near the snow-caps and constantly monitoring them. The first and most sensitive layer of the glacier, the skin, continues to be studied.

When I took a position at the Institute of Hydrology, Meteorology and Environmental Studies (IDEAM) a few years later, I knew nothing about monitoring glaciers. In university I had gone to Nevado del Ruíz and Nevado de El Cocuy but the experience did not fully prepare me. This job took me to another level, climbing twice a year to the snowy peaks of Santa Isabel and El Cocuy. I feared the cold and for good reason. It remains exhausting and frustrating.

People misunderstand glaciers. Humans generally think glaciers are cold, static, and white, but the glaciers change frequently. Every month they change color on the same day. Each glacier bares a unique personality related to local conditions and height.

On each climb to the glaciers, we leave marks with spray or red paint to monitor them; the marks contain historical value. Thanks to these marks, ecologists discover patterns such as the colonization of plant species as the area loses snow. The first species to colonize include fungi and lichens, the strongest species in the paramo. I like to call them warriors of the wasteland. Other types of lichens and species with roots arrive next, and thus, little by little, a new ecosystem forms.

People consumed by sensationalism ask me, “When will the glaciers disappear?” I answer, “Everything in life is about change.”

Young people who live in these environments more often realize the ecosystem is changing, and they organize themselves. They collect resources, journal those changes, commit and act toward preservation. I call this participatory glaciology.

In 2015 I started working with women and hope to continue and grow that work. In thier hands, glaciology can expand. We can study the snow caps and make an impact in the face of climate change.