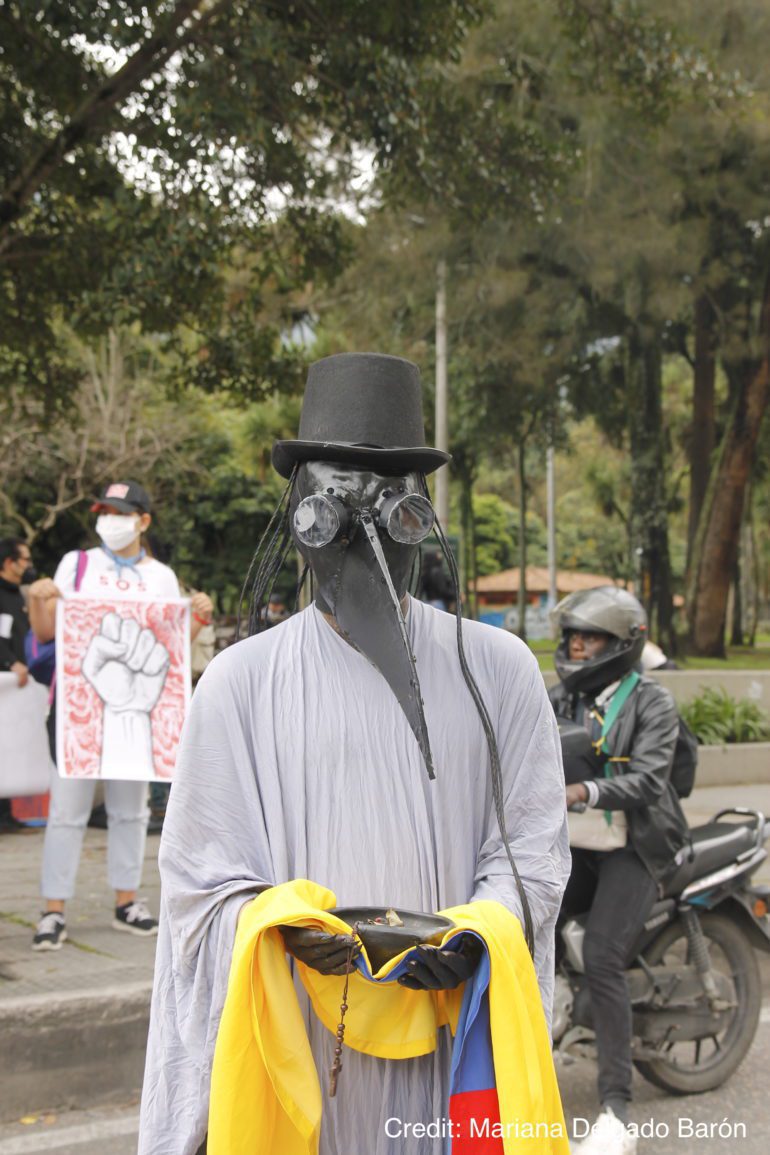 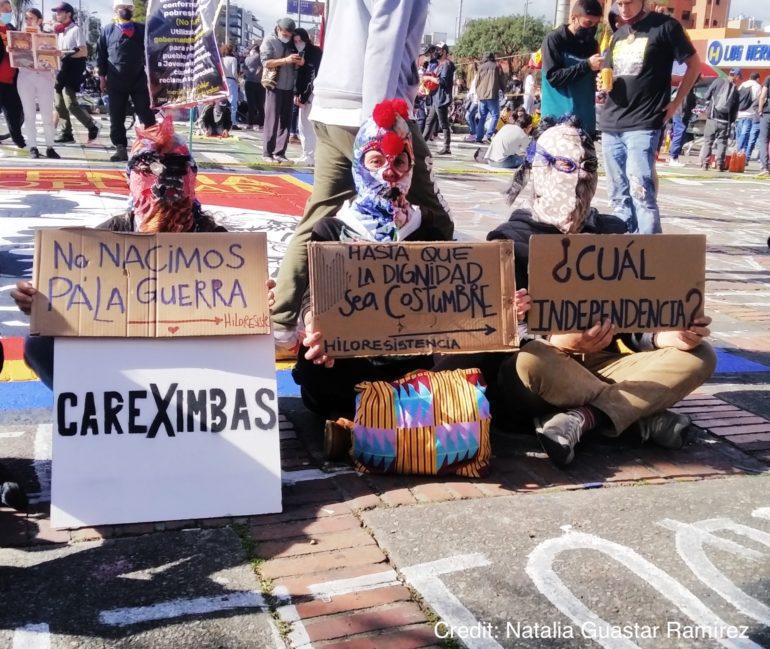 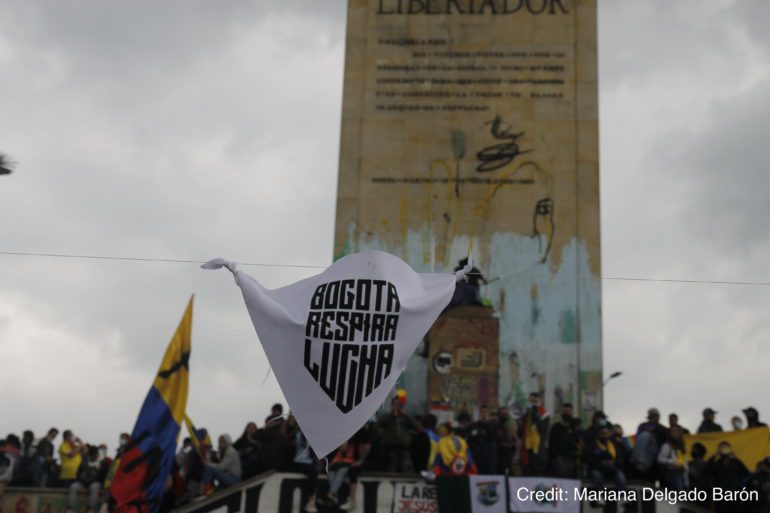 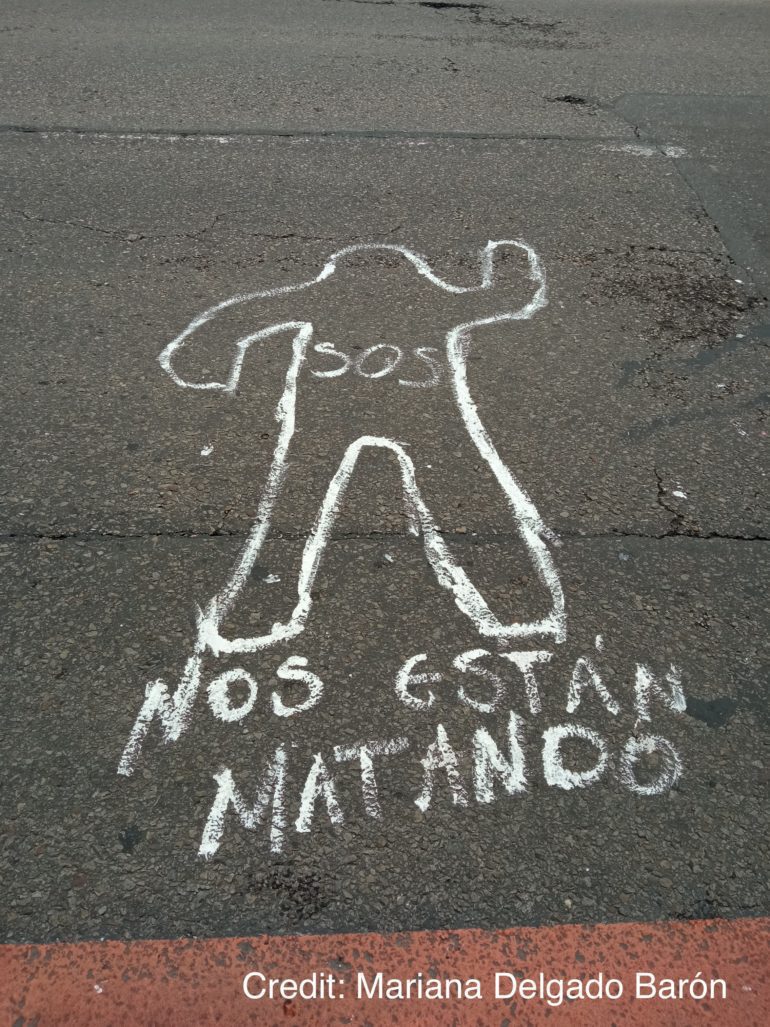 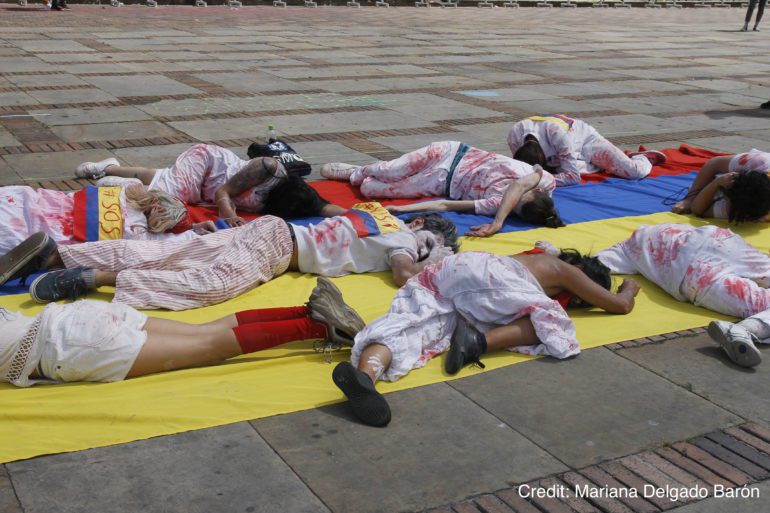 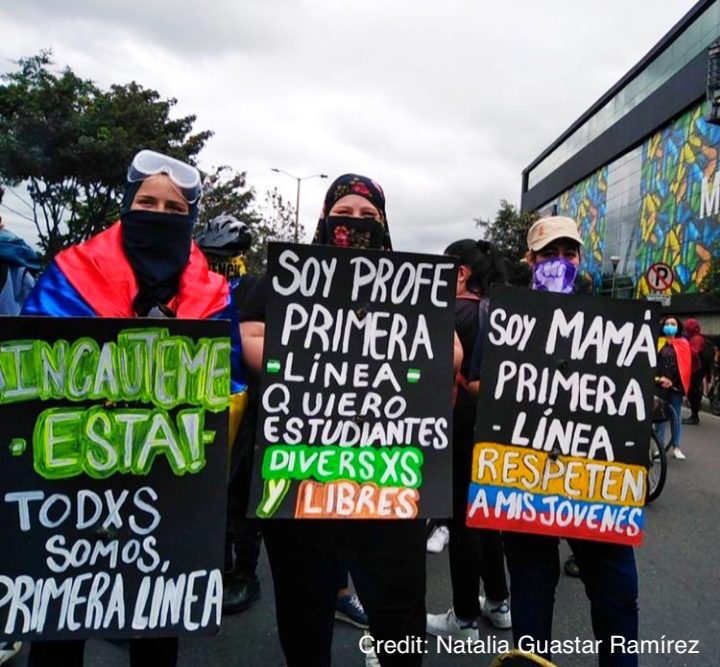 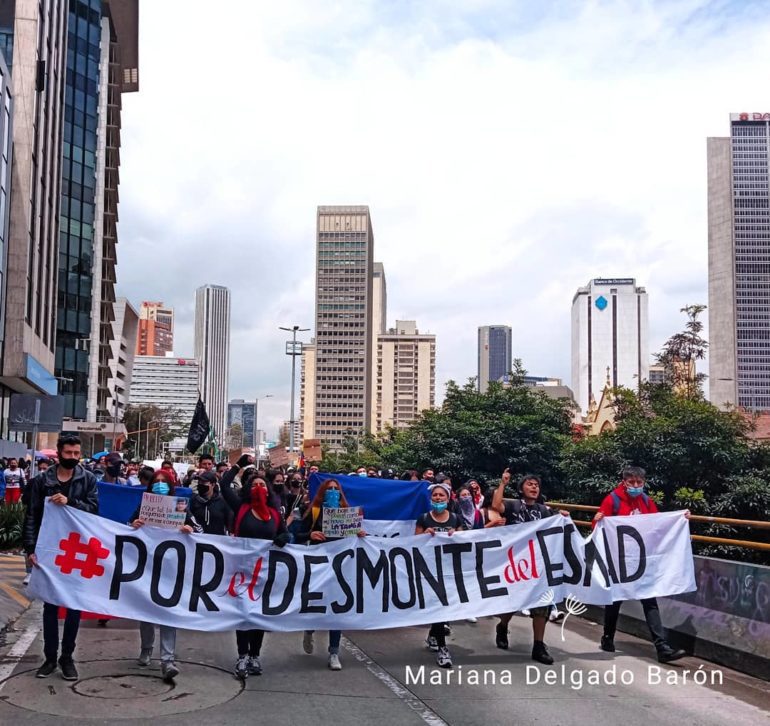 For the dismantling of the Esmad (Mobile Anti-Riot Squad). Young people demonstrate in the streets of Bogotá against the police violence carried out within the framework of the 2021 National Strike. | Mariana Delgado Barón 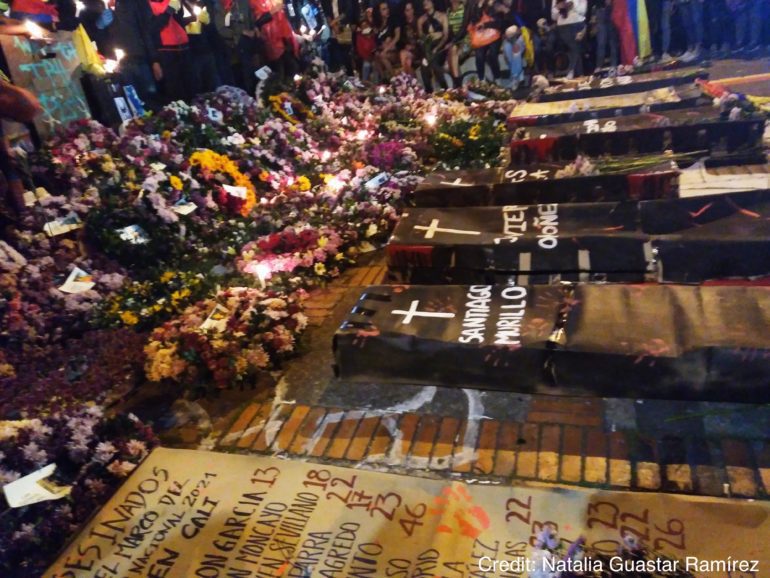 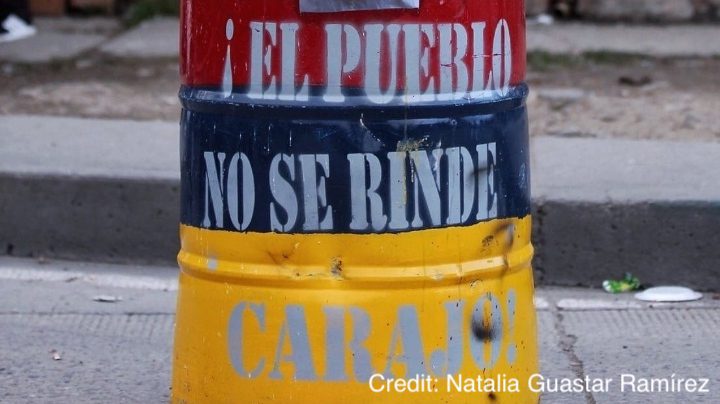 See the National Strike in Colombia 2021 from the ground as it was happening. 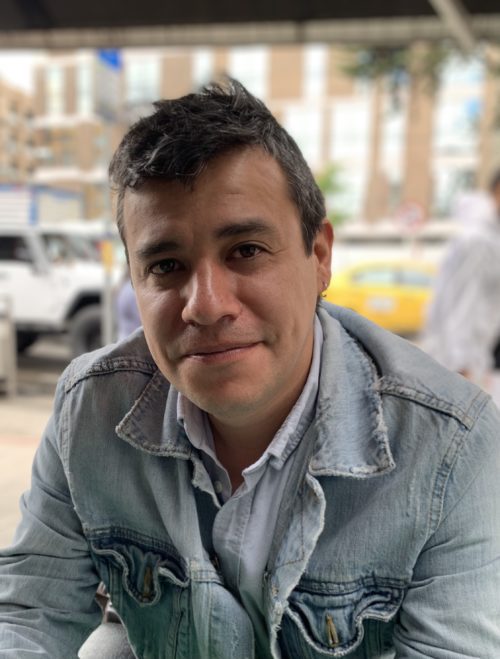 Interview Subject
Alvaro Piedrahita is a 34-year-old architect living in Bogota, Colombia. He worked for various construction firms and managed his own architectural businesses, but the Colombian economy was not favorable. After leaving the country, he returned in the hopes of helping create positive change.

A firm believer in nonviolence, Alvaro participated in the Colombian National Strike and was a first-person eye witness to the brutal police response.
Background
On April 28, 2021, mass protests erupted in Colombia as a response to a fiscal reform presented to congress by the president. These protests came after a year that saw drastically reduced income on middle and lower class households in a country where poverty rates reach 42%.

Massive protests had already been held during November 2019 in response to the ongoing persecution and assassination of community leaders and guerrilla ex-combatants, environmental and economic policies, and the national government’s lack of progress in the establishment and compliance of the peace accords signed with the FARC guerrillas. These protests left at least 3 fatalities and hundreds wounded after a violent crackdown by police forces.

Protests erupted again between Sept. 9 and 21, 2020 in response to the beating and killing of the civilian Javier Ordoñez by the hands of the police. On this occasion, 13 civilians were killed and 54 were injured by gunshot wounds. More than 200 were injured by blunt weapons.

Lockdowns implemented during the COVID-19 pandemic put a stop to the protests in the streets but the discontent was never addressed. The presentation of fiscal reform was the trigger that unleashed the most recent wave of violence in the main cities of the country. As a result of the 2021 protests, President Ivan Duque withdrew the tax proposal, and Finance Minister Alberto Carrasquilla resigned.

BOGOTA, Colombia – On April 28, 2021, I took to the streets to exercise my God-given right to protest peacefully. Together with other citizens, we demanded change.

My government answered our demands with tear gas and flashbangs, but they cannot extinguish my voice or my hope for the future of my country.

I immigrated back to Colombia in January to contribute to a better and more equal society. I never imagined these efforts would become life-threatening.

For years, I worked as an architect in Colombia’s construction industry. On three occasions, I opened my own business and on three occasions, I had to close them down. High tax burdens and an unstable economy constantly pushed me back to square one. Eventually, I left Colombia for more stable opportunities.

My desire to contribute to my country through my work as an architect remained unchanged; I always wanted to broaden my experiences and return home to practice.

When I finally returned to Colombia in January 2021, the country’s general situation had worsened. After a year of lockdowns due to COVID-19 and little relief from the government, I felt tension in the streets.

Unemployment and poverty reached uncontrollable levels and there was a general feeling of desolation. People experienced a complete lack of empathy from the establishment.

By April, a tax reform proposed by the executive branch had people talking. The reform would place further tax burdens primarily on lower and middle-class families already choked by poor employment. When the reform went to congress, all hell broke loose.

On April 28, the general strike in Colombia began, met almost immediately by strong and violent repression from the national police forces.

By May 28, citizens persevered through a full month of uninterrupted protests. Sadly, the number of casualties mounted, and the whole world saw it. Excess force and police brutality were on display through live social media transmissions.

I believe in the power of peaceful protests, so I joined the demonstrations that day, expecting nothing more than a show of discontent.

Protesters planned several assembly points throughout the city. Massive gatherings included music and cultural displays. I would join friends at the Monumento a Los Héroes [Monument of Heroes] on the north side of Bogota. A crowd gathered to hear the bands play.

I arrived at the transit station around Noon to meet my friends. Thousands of protesters filled the streets leading to the monument and a huge Colombian flag hung from a pedestrian bridge. The sheer volume of people – and the hundreds more arriving by the minute from every direction – was unbelievable.

Never in my lifetime had I seen a demonstration of this scale. The youth represented a major portion of those present, but something felt out of place. As I walked around, I realized there were no police forces to be seen. I anticipated an afternoon of music and calls for change.

My expectations quickly changed when I walked just a few blocks east for lunch. Sheltered behind a long building flanking the Monumento a Los Héroes, at least 100 police officers stood waiting. In full riot gear, with some on motorcycles and in armored vehicles, they stood ready to storm the Monument.

Despite their lingering presence, the afternoon moved forward with a major disruption. The image of the police, however, remained burned in my mind.

By 11:00 p.m., most of the bands played and protesters headed home. The first police squadrons appeared from either side of the building they stood behind throughout the day. The intimidating sight of the riot squad provoked anger and animosity among the protesters still present.

Objects started flying. I cannot say who or how it started, but the objects thrown back and forth led to loud bangs, smoke, tear gas, screams, and people scattering as they became desperate for shelter.

The police forces advanced in a pincer movement [a military maneuver where forces attack both sides of an enemy formation]. The method trapped groups of protesters in a small plaza between the Los Heroes transit station and the monument itself.

As the burning sensation from the tear gas took over, I ran west hoping to escape. In doing so, I lost my friends. A general feeling of confusion and anger swept through me.

I do not know how many people became trapped whereas I escaped. I cannot tell you how many were detained that night, or remain detained today – held without charges in temporary detainment facilities.

Reports of missing protestors increase daily. Through luck, I am not a name on a list. Still, questions remain. Why did the police attack a gathering that was ending willfully and peacefully? Who ordered them to proceed? Is this response from the government an appropriate answer to the justified pleas of the people?

In the past, when I watched events like this unfold on the news, I doubted the establishment or police force could be so crude and insolent. Today, I see they need no provocation to confront protesters with violence.

They only need an order from above. 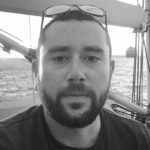