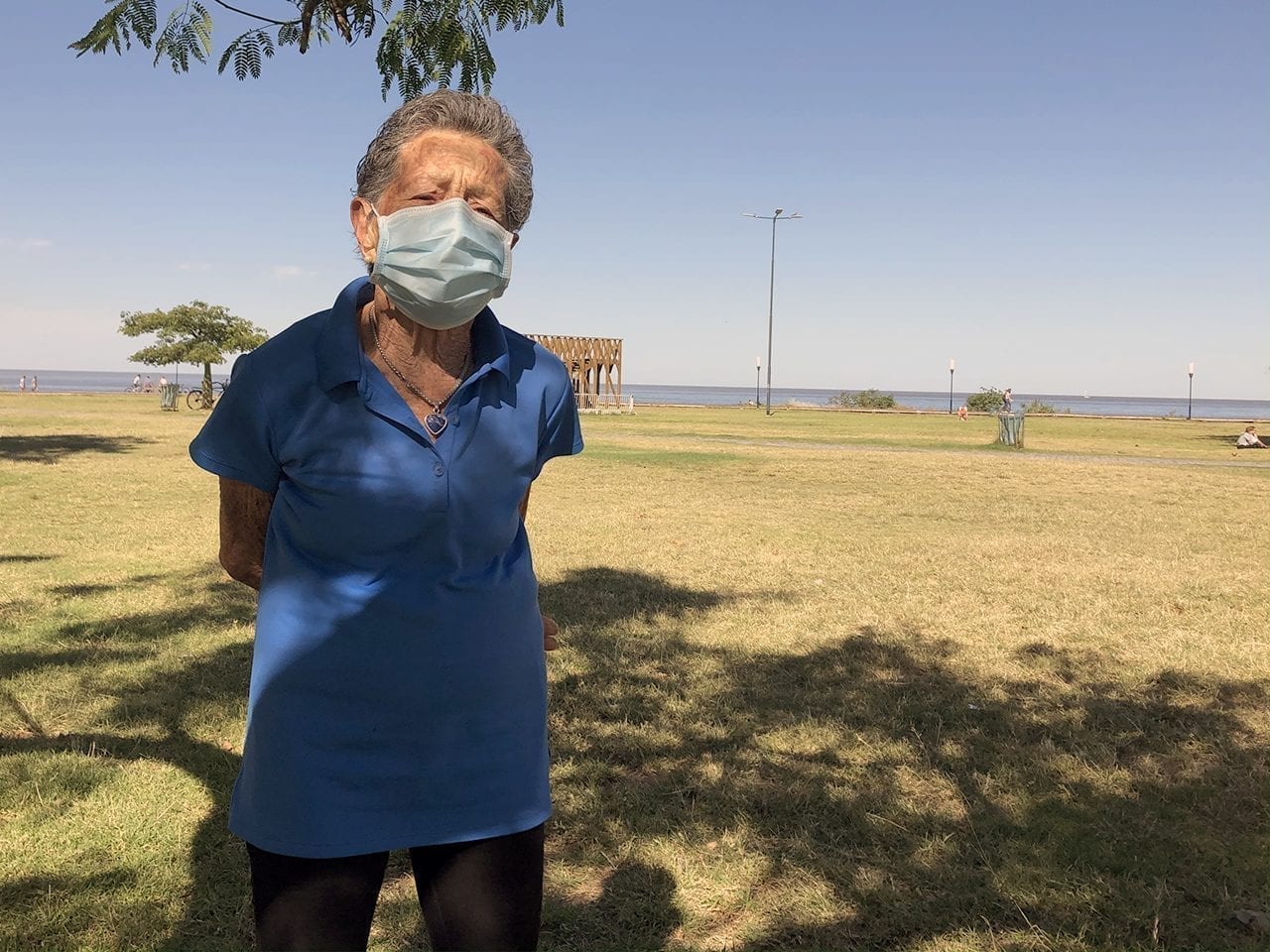 Elisa Forti on her patio near Vicente Lopez's waterfront.

Never say to me that you are too old to learn something new. Age is only in one's head, and I want to live. 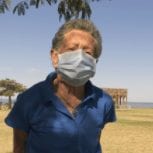 BUENOS AIRES, Argentina — At 85 years old, I only run for beauty — I never look at the clock.

I always run on the grass, not on the asphalt. I go near the trees and the water. It sedates me, calms me down, gives me a push.

Never say to me that you are too old to learn something new. Age is only in one’s head, and I want to live. I want to thank life that I wake up every day. That is why I always keep busy — to take advantage of the luck of having a life, of having a reason. If you don’t have something to do, why are you going to get up in the morning?

Despite a life with sports, I started running at 72 years old, but age is a number. Today, I am 85, and I am not going to stop running.

It all began when a colleague from work told me that she was going to run a race in Villa La Angostura, Province of Neuquén, with her group and it caught my attention. Beyond the aspect of running, I was interested in knowing the place, connecting with nature.

I insisted and insisted that they take me and she said, “Yes, they let you come with the group, but not run.”

When I was there, I loved the sociability that there is in the world of running. They made me feel comfortable from the first moment.

There I said, “Here I am, this is my sport.” I stopped playing tennis and started running.

I don’t do street running because of the noise, the monotony, and the people pushing you.

When I start to hear the shouts of arrival, I think “Oh, how lucky, I arrived”, but don’t ask me how long it took because I don’t remember. I do not look at the clock, I am not interested in times. In adventure races, between mountains, I am alone with nature, with a huge sky, a divine floor. I turn around and see the valley I left behind. I always come back with a pebble, a flower, a memory in my pockets.

When I run, I talk a lot with Niti — a friend who is now gone. She is the daughter of the owner of the factory where dad worked in Italy and the catalyst behind our move to Argentina. When the war ended, they brought the factory to Buenos Aires. My father, who was the director, came with it.

We knew each other since we were seven or eight years old. She lost her husband and, out of sadness, she fell ill and died. In one of the last talks we had, she gave me a chain that I use only for running. She told me, “Elisa, never stop running, because it does you very well.”

Niti wrote books. When I’m in the middle of a race and I start getting tired, I tell her, “Niti, put down the books and come to help. I’m here because of you.”

The crossing of the Andes

As I like running in nature, when the incredible opportunity to cross the Andes came to me, I did not hesitate for a second.

The crossing was a magical and unrepeatable thing, improved only by the fact that I was able to run the Andes twice with two grandchildren. Our generation criticizes the young, but during that time, I met two loving individuals who thought of me and not of themselves. Each of the voyages was special. Connecting with nature, among the majesty of the imposing mountains, together with my grandchildren was priceless.

When something comes to my head, it is very difficult for someone to be able to get it out. Circumstances or accidents in life may keep me away from the sport for a moment, but I always run again.

When I finished the crossing for the first time, I was greeted with a banner that read, “You did it out of stubbornness.”

A mirror to the past

I was born in Italy, on the Lago di Como, and lived there through the Second World War. I do not fear death. I became used to enjoying whatever life dealt me. Dad taught me to always face situations with a smile, so as not to transmit fear among the kids.

Running in the mountains is like recovering what I used to experience as a girl. I have photos of me when I was three or four years old, riding my father’s horse on a 3,000-meter-high mountain. We used to go to the mountains to look for fish in the streams and strawberries in the field. That was my life.

Here, I replaced the mountains with sports. When I went on vacation to Mar del Plata with my young children, before leaving them free to do whatever they wanted, I forced them to walk for an hour with me among the stones. They didn’t like it, sure, but I was stubborn.

Years after leaving Italy for Argentina, I found myself racing in my hometown in Italy. Juan Manuel, a runner in Palermo we call The Angel, arranged race tickets in Como.

Suddenly, I found myself running on the shores of the majestic lake and my family was with me. My grandchildren, who live in Spain, traveled to see me with my great-grandchildren and two of my children.

I said to myself, “Elisa, do you realize what you are doing? You joined four generations in the place where you were born and doing something beautiful.”

Life in the pandemic

This year, despite the pandemic, I managed my routine very well. During the confinement, my daughter brought me a bicycle from her kinesiology center and I used it in the living room. Afterward, I would go to the terrace to sunbathe and jog for an hour, doing a hundred laps.

I tidy up and clean my house, I cook a little for my children, I go to kinesiology to do balance exercises for my knee and I train every day in the afternoon for an hour. The day flies by when you are busy.

As soon as I could, I went out for a run again, even before the government authorized it. I was never afraid of the virus.

Some time ago, I realized that by doing this that I like so much, I could also help people.

In a race, a young woman approached me to run with me. She told me that she had cancer, that they operated on her, but it came back and she had to start chemotherapy. She wanted to cross the finish line holding my hand.

Again, in Salta, a boy approached me, hugged me, and thanked me. He told me that a year ago he was lying in bed watching TV and he saw me racing. There he said, “I’m lying here and that lady, at her age, running there.” He started running, and we met in his first race.

Before, I was uncomfortable with these situations. I had many of these cases. But now I know that I am useful. I am not caring for the sick in a hospital, I am doing something that I like. And on top of doing what I love, I can help others.

It would be a prize to die doing what I love.

I will run until I can run no longer. And then I will walk. When I can’t walk, I will still do something.

If your head is in the right place, you have every reason to live life to the last second. It is the best inheritance, the best memory, that I can leave to my family.

The Human Performance Laboratory at Ball State University, in Indiana, United States, showed that the heart and brain can “rejuvenate” for around 35 years thanks to running.

The study revealed that people over the age of 75 who exercise regularly have cardiovascular health similar to those aged 40 to 45.

The WHO (World Health Organization) recommends doing, at least, aerobic exercises (such as running) for 150 minutes a week if they are of moderate-intensity or for 75 minutes if they are of high intensity.

This helps reduce the risk of depression or anxiety and NCDs (Non-Communicable Diseases), that is: cardiovascular diseases, cancer, chronic respiratory diseases, and diabetes. It is estimated that some 3.2 million deaths a year in the world can be attributed to insufficient physical activity. 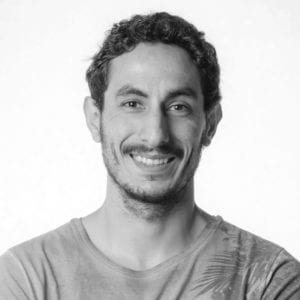