Following his military service, Oleksandr Tereshchenko wrote a book about his experiences titled "Life After 16:30" | Photo by Yurii Velychko

At one point during the fighting, I spotted a grenade under my feet. I tried to throw it outside of our fortification, but it exploded right in my hands. I hit the ground knowing that the irreparable had just happened. I could not feel my arms, my right eye was filled with blood, my lower lip was destroyed. I did not feel any pain, only terrible nausea because of blood loss.

Interview subject
Oleksandr Tereshchenko is a Ukrainian veteran of the Russia-Ukraine war.

Before the Russian aggression, Oleksandr worked as a videographer. He signed up to be a soldier voluntarily in 2014, but in October of that year received serious injuries during combat, resulting in the loss of his arms and ending his military career.

From 2019-2021 Oleksandr served as deputy minister for Veterans Affairs of Ukraine. Now, he works as chief of the Department for Veterans Affairs, Mykolayiv City Council.
Background Information
The Ukraine’s Euromaidan demonstrations began in Kyiv in November 2013. Participants were protesting the government’s widespread corruption and the suspended signing of the European Union–Ukraine Association Agreement, which signaled instead a desire for a closer relationship with Russia.

Though the protests began peacefully, they devolved into violence in early 2014, with security and police forces killing more than 100 mostly civilian protesters over several days in February of that year.
In the immediate aftermath, Russia occupied Crimea, part of Ukrainian territory. A few months later, in April, they seized the eastern part of the country.

According to the United Nations, about 14,000 people have been killed in the war, more than 3,000 of them civilians. Over 1.5 million have been displaced.
Early 2022 has been marked with rising tensions between Russia and Ukraine due to Putin’s bringing an estimated 130,000 troops to the border between the two countries.

DONETSK, Ukraine—My journey to joining the Ukrainian military was months in the making.

Not having found the courage to go to Kyiv to participate in the Euromaidan revolution in February 2014, when the violent confrontation started, I felt worried and ashamed in the aftermath.

Following the revolution, I was walking down Kyiv’s Instytutska Street, past the portraits of the Heavenly Hundred (the participants of the Euromaidan Revolution killed by police and security officers). In those photos, young men of my son’s age, who gave their life for Ukraine, looked back at me. In contrast, I felt like slacktivist (a person advocating for change by means involving little effort, like voicing concerns on social media).

When Russia annexed Crimea on Feb. 27, 2014 and started the occupation of Donbas, I realized that if I was not able to overcome fear this time, I would stop respecting myself completely.

Still, I grappled with my decision for more than a month. I came up with various excuses: that I was not young anymore (I was 47 at that time); that I had previously served only in the construction unit of the military and had no actual training as a soldier; that the war may end soon without my participation. However, news from the frontline brought me back to that moment on Instytutska Street, evoking the same emotional suffering.

Finally, I made up my mind to go to the military draft office and inform them I was ready to join the Armed Forces of Ukraine. Considering my age and no previous training, I was sent home. “We will call you,” they said.

Seeing moments of beauty in hell

There were some positive moments on the frontline.

Once, when stationed at Kramatorsk military airfield in the Donetsk region, a child’s drawing attached inside of an armored vehicle, left by a previous crew member, caught our eyes. We found barely visible writing at the bottom of the picture. It said, “Soldier, if you are looking at this drawing, call the number…”

Our commander called, and a grandma of the boy who drew the picture picked up the phone. They lived in the Ukraine-controlled city of Mykolaiv and were very happy to hear from us. The old woman asked if we needed anything, and the boy said he would draw more pictures. It was a very touching moment.

Although we only asked for wet wipes and coffee (and of course, more drawings), we received a large parcel with various treats in a week or so.

The second episode from the war that impressed me also happened in Kramatorsk, right before our rotation to the Donetsk airport (the most volatile location at the time). It was Oct. 6. Our unit commander lined us up after lunch and announced that volunteers were needed at the Donetsk airport. There were 40 of us in the unit, and all agreed.

But then, experienced fighters—who had already been on the battlefield—practically forced out of the line those soldiers who had little kids back home. For the first time, I understood the meaning of genuine camaraderie.

The grenade that changed my life

Our unit arrived at the Donetsk airport on the afternoon of Oct. 14, 2014. When the shooting started, there was a threat that the enemy could come very close to our fortification inside the airport, between the two terminals. We started shooting back to prevent them from approaching us.

At one point during the fighting, I spotted a grenade under my feet. Though I tried to throw it outside of our fortification, it exploded right in my hands.

I hit the ground knowing that the irreparable had just happened. I could not feel my arms, while my right eye was filled with blood and my lower lip was destroyed. There was no pain, only terrible nausea because of blood loss.

I had been oddly sure nothing bad would happen to me at war, and the first feeling to hit me was shock that something had. My right hand still hung on my tendons, so I still hoped it could be saved. I hinted to my comrades that they should shoot me, because I would not be able to live without arms.

All the way to the hospital—at first by the armored vehicle, then by ambulance, then by helicopter—I felt so sick due to blood loss that the only thing I wanted was to pass out as soon as possible.

The first month was the hardest. I couldn’t even eat without someone’s assistance.

I hate helplessness, and being in this condition infuriated me. Before my injuries, I did everything by myself, for myself, and in a swift, capable manner; I found it very difficult to even explain what I needed or how people could best help me.

Through it all, though, my emotional state never deteriorated. I attribute that to the enormous support from my family and the many different people who came to the hospital each day to assist and support me.

During rush hour in the metro, it could be challenging to brace myself against the ceiling with my prosthesis so I didn’t stumble or fall. At first, unwanted attention from passers-by or public transport passengers grated on my nerves. It seemed to me that every second person was staring at me, thinking how it was a wonder I did not commit suicide in my situation.

My dream would be for people to not notice me at all. Luckily, since my first independent trip abroad, I just stopped paying attention to the interest of people on the streets altogether.

Since my injuries, I’ve tried to focus not on the fact that I had lost my arms, but exclusively on the technical side of my new reality—what I could do with what I had left?

For instance, I invented the way to use an elastic sports bandage to eat or use a tablet on my own. In the first case, someone just had to attach a spoon to the bandage, and in the latter, a stylus.

Learning to thrive independently without arms

My greatest breakthrough happened when I moved to Kyiv to work in the Police Academy as a deputy director on pedagogical work. I realized that I could only demand respect and discipline from my subordinates and be effective as a leader when I did without any help.

During my almost year of work with the Academy, I lived in Kyiv with my older cousin Tetiana. She helped me around the house and supported me at work. Once, she urgently had to visit her sick father for two weeks. I told her that my wife would come, but I lied. I just wanted to stay on my own and try to live independently.

The only thing I asked my cousin in advance was to button my uniform shirts, apart from the top two buttons. When getting ready for a workday, I would put on a shirt through my head and then ask my deputy to button the top two buttons once I got to work. In the evenings, I managed to unbutton them enough to take the shirt off. I also worked out a technique for zipping my pants.

I had to wake up 1.5-2 hours earlier in order to get ready, have breakfast, and lock the door myself. After work, I visited the local store to buy premade food, which I warmed up in the microwave.

I lived like that for two weeks and was never late for work. No one except my deputy knew I was coping on my own. In these two weeks of forced independence, I learned things I hadn’t managed to master for three years previously: to use eye drops, make coffee, zip my belt, open a door with a key on a dark porch. I remain proud of how much I accomplished during this period.

Sharing a message of resilience with others who might be struggling

I wrote a book about my experience called “Life after 16:30” because 4:30 p.m. was the time when that grenade exploded in my hands.

My main message in the book is not only for fellow fighters, but also people in any tough life circumstances: never give up.

I feel I am more useful and even happier now than before the war. This hopefulness is what I try to convey in my writing.

“At Orato World Media we stand in solidarity with our correspondent in Ukraine and all the Ukrainian people as they face this unprovoked attack from Russia.” 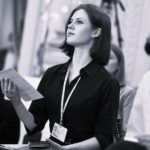